The View Actually Asks: Did Trump's Win Cause 'Electile Dysfunction' In the Bedroom? 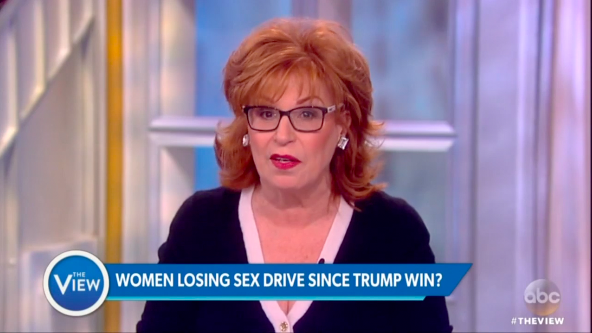 To start off ABC’s The View show December 2, the ladies actually discussed whether or not Trump’s election win was causing a phenomenon of wives spurning their husbands in the bedroom. Calling it the ‘Trump Bedroom Backlash’ Behar asked, “Is Trump causing ‘electile dysfunction?’” before the panel erupted in giggles but also agreement.

Behar opened the show with this silly monologue:

BEHAR: Have you noticed your wife is disgusted by the sight of you lately? Would she rather get a root canal than see you naked? Well, you shouldn't have voted for trump, okay. One therapist called it the trump bedroom backlash because her clients have lost their sex drive since trump won. So here's my question. Is trump causing electile dysfunction?

Co-host Paula Faris was the only one at the table pushing back at the notion that disagreement over an election could have that strong a sway in a healthy marriage.

“Why are we you inviting Trump into the bedroom to begin with?” she asked.

Former FNC host Jedediah Bila however, disagreed, going on a slightly out of character feminist rant.

“I think women feel the need to assert their authority and their power,” Bila stated before adding:

BILA: Yeah, they feel like this guy came into power who didn't respect women. And sex, for women, I think is a vulnerable experience more than men. I think they feel vulnerable. It's their way of lashing out, not at their man, but at society. No, wait a minute you do have to respect me. I am in control. I can still be in control of my life even though this guy is in power now. Who’s running the country, Who has said some things about women that concern me about where I'm going to be, where I’m going to be with my job, am I going to be respected the same way. What’s going to happen to me? They go into their bedroom and they face their man and it's a power dynamic I think they're working through. I get it. I get it. [ Applause ]

Taking a more serious tone, Sunny Hostin brought up how this election “was different” than others, apparently justifying any ill will wives may have for their husbands if they voted for Trump. Hostin added that women came out “in droves” to get IUD contraception from their doctors, apparently (Is this a claim that could even be reported or verified?)

HOSTIN: But Joy, this election was different. If you look at the stats, I think 36 anti-women hate crimes were reported within one week of the election.

HOSTIN: Yes. And that’s according to the Southern Poverty Law Center.I think to Jed's point, women are feeling very vulnerable. Remember we talked about the fact that women after the election were going out in droves to get an iud because they thought their birth control would be taken away from them.

Behar then cracked, “We are building a wall around our vaginas--” to which the panel erupted in laughter.

BEHAR: Because the guy says it's okay that he can grab a woman by her you know what. Women are a 10 or a 1. Or this woman’s fat or bla bla bla. And you voted for that schmuck? You voted for that? I'm not sleeping with you. That's where they're coming from.

Not finished apparently with her feminist tirade, Bila theorized this election was worse because “a very strong, powerful woman” lost to this “demeaning” man.

BILA: I think it was compounded by the fact that a woman lost. You had a very strong, powerful woman up there facing a guy who was saying not so great things about women. And she lost. So I think women around the country are saying, well, she may have lost, but I'm going to win. I'm going to be in control. I get it. I didn’t support her but I get it.  I do get why when you were going against someone who was kind of demeaning to women and women felt threatened.

Faris, again, was the only panelist to disagree with the silly findings. “The reality is 42% of women in the country did vote for Donald Trump. This is obviously the experience of one therapist that we’re talking about,” she stated, trying to ground the panel in reality.

Hostin wouldn’t have that.

HOSTIN: 94% of black women did not vote for him.

FARIS: Okay, there you go. Let's hedge that. Put that out there.

To see what kind of high brow research the writers at The View do to get their show topics, it took me a while to even find what story they were referencing. I believe I did, in the gossipy women’s blog “YourTango,” whose article has nearly identical talking points as the panel’s, even down to Hostin’s ‘anti-women hate crimes’ statistic.