The View Complains Trump Won Election 'Illegitimately' Because of Racists, FBI, and Lies

Friday’s “Hot Topics” on the View was so incredibly biased it was hard to know where to begin. After playing a leaked audioclip of Trump aide Kellyanne Conway arguing with Clinton aide Jennifer Palmieri about the election results, Behar asked the panel if Palmieri was right in calling out Conway for winning on a platform of white supremacists. The liberal panelists wholeheartedly agreed with Palmieri, with Sara Haines making the most ludicrous comment.

Behar began by asking, “Was Clinton’s camp right?” She added, “Or are they being sore losers?” 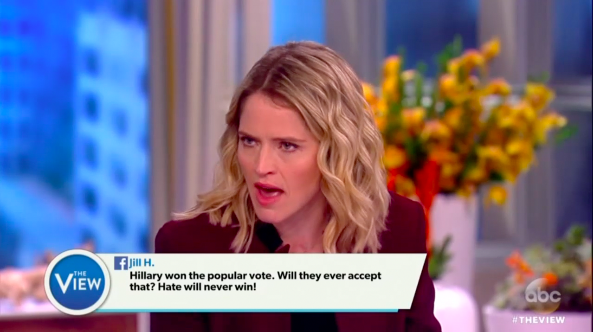 Haines responded in wholehearted agreement that racism existed solely in the Trump camp:

“[T]hat is a fact. It doesn’t mean that everyone that voted for Trump is a racist. But as Whoopi says over and over, ‘All the racists voted for Trump.’ So, I think the fact that you won just be honest. It's not -- it's not even admitting anything,” Haines ranted.

Behar jumped in to take the other position. “Yes, we’re sore losers!” Behar said, before delving into the litany of every excuse the left uses as to why they lost the election fair and square:

BEHAR: Yes, we’re sore losers, because a lot of the reason he won was based on racism, the Russian hackings. Lies. Continuous lying that went on. And the intrusion of the FBI at the last minute there. All of that seems to have basically distorted the whole election. So Yeah, we're sore losers. Because it wasn't really won legitimately, as far as I'm concerned.

Sunny Hostin then jumped in to get more specific in the bashing of the racist Trump camp.

HOSTIN: Sarah to your point, You're right. I don't think he ran a racist campaign. But he did give that platform. I believe that platform continues in his choice of Steve Bannon as his chief strategist,” she began. Panelist Paula Faris pushed back, being the only one on the panel to do so.

FARIS: I do think there are several cards we can play. We can play the sexism card very easily. The racism card can also be played. It can be so dangerous.

Hostin shot back, “He [Donald Trump] played all of them.”

Faris and Hostin then got in a heated back and forth argument over the Trump pick of Jeff Sessions to Attorney General. While Faris tried to list all of the good work Sessions has done for civil rights, Hostin wouldn’t budge in her opinion that he was “a bigot” and repeated that point like a broken record.

FARIS: One thing, we looked at the hiring of Jeff Sessions for attorney general. And these were -- unfounded accusations from 30 years ago. That he --

HOSTIN: Somebody testified under oath that he called an African-American man a boy. He's a bigot.

FARIS: But he testified that he did not. It's one person against another. If you look at the whole picture, Jeff sessions also was a champion and advocate for Rosa parks to get a memorial.

HOSTIN: You do not want to be in the seat defending Jeff Sessions, Paula.

FARIS: If you look at the whole scope we go by facts. There was no facts, It was completely unsubstantiated.

HOSTIN: I don't think an assistant attorney sat under oath...

FARIS: Ok, but just let me finish. Jeff Sessions also prosecuted members of the kkk. Jeff Session’s right-hand man for a long time was an African-American. He championed and advocated for Rosa Parks.

HOSTIN: And he's a bigot.

FARIS: You can easily play that racist card.

The media has been fiercely attacking Jeff Sessions ever since his name was floated as a potential AG pick. It’s a wonder that an unsubstantiated comment from thirty years ago can be drudged up as evidence a Republican is “a bigot” while there are plenty of Democrats who have made worse comments, on the record, to not have their name or reputation sullied by the media.