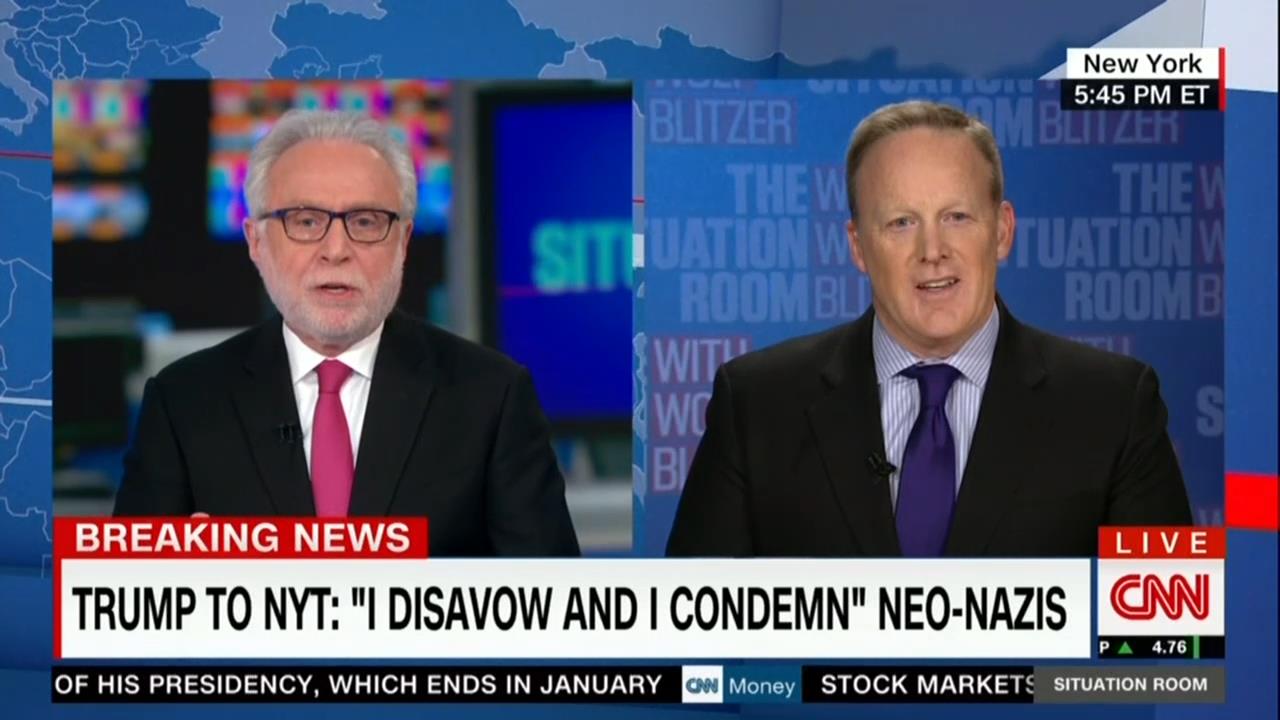 On Tuesday’s The Situation Room on CNN, anchor Wolf Blitzer joined the rest of the media in spending endless hours harping on a gathering of 200 white supremacists expressing their support for Trump. While Trump denounced the group, and has done so in the past, this wasn’t good enough for some journalists like Blitzer, who demanded that Trump do more. In an interview with RNC strategist Sean Spicer, Blitzer repeatedly asked Spicer why Trump hadn’t come out in a video or a formal speech to denounce their support. Eventually Spicer snapped and asked Blitzer, “Should he write it in the sky with an airplane? I mean at what point is it enough? I don't know but I think that he has been very clear, and it's time to move on.”

BLITZER: Should he go out and deliver a speech specifically denouncing these neo-Nazis, these white supremacists saying--

BLITZER: Should he go out there and deliver a specific speech and make that abundantly clear he doesn’t want these people’s support and he condemns them?

Spicer responded that Trump “has condemned” them and “at some point” the media has “got to take his position and go and move on.”

SPICER:He has said that he refutes that, that’s not the kind of movement he wants to support, be energized by, not the kind of people that he wants to be associated with him. I don't know how many more times Donald Trump can make his position clear, but it's been crystal clear for a long time and over and over again with every tweet, utterance, you name it, Facebook post. He has to somehow respond to it. He has made his position clear, it’s time we accept that position and move on. That's not his focus.

BLITZER: Why do you think Sean, these neo-Nazi groups, these white supremacist groups that we saw here in Washington over the weekend and you saw the video. Why do you think that they still support him?

SPICER: I don't know. That's really not my focus, figuring out why certain groups supported him or didn’t…. To continue to ask him over and over again the to denounce the same people and same words and groups over and over again is getting a bit preposterous...

But Blitzer wouldn’t let it go. For a third time he asked Spicer the same question.

BLITZER: Why does he not do that more dramatically, if you will, and make it clear that he wants no part of these people?

SPICER: [I] don't know how many times he has to answer that question, and you figuring out the way and fashion to do it next. If he goes out and gives a speech, should he write it in the sky with an airplane? I mean at what point is it enough? I don't know but I think that he has been very clear, and it's time to move on.

Blitzer’s final proposal was for Trump to come out with a “formal statement” or maybe a “Youtube video” denouncing the group.

BLITZER: I think what a lot of people would like to see is a formal statement similar --

BLITZER: He did a two and a half minute video yesterday outlining the economic plans for the first 100 days. Why not simply do another Youtube video and directly address those people and say ‘You know what? You're not apart of my team. I don't want your support. I hate what you're doing’ and end it once and for all. Take the initiative instead of simply reacting to when a reporter asks him a question.