Pence Hates Gays, Women, Refugees, at Least According to the Media Parroting Clinton 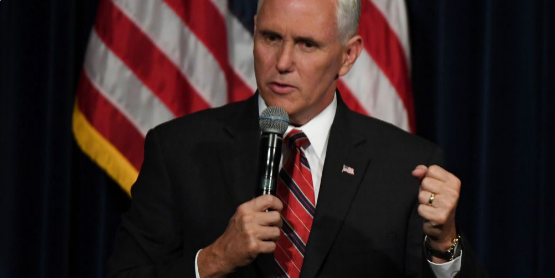 Ahead of tonight’s VP debate, the media are coming out hard against Trump’s running mate Mike Pence and they seem to be taking their cues from the Clinton campaign. After repeated attacks from Hillary Clinton and her team in the past two days, liberal journalists and outlets on Twitter started parroting these same talking points. Because Pence is a strong evangelical conservative, the media have attacked him as anti-gay, anti-women's rights and anti-immigrant.

The Clinton team has worked overtime the past few days trying to demonize Pence. Hillary Clinton’s team called Pence an “extremist” who was “divisive, anti-woman, anti-LGBT,” and “anti-worker.”

Teddy Goff, a Clinton PR staffer who formerly worked on Obama’s 2008 campaign, dramatically called Pence “one of the nation’s most viciously right-wing Govs.”

Worth remembering: Mike Pence is one of the nation's most viciously right-wing Govs, and would be a shocking VP pick in any non-Trump year.

This message set the tone for the media who tried to make the case that Pence was a bigot. As a Christian conservative, characterizing Pence as anti-gay is always the left’s first concern so of course that’s where many outlets started their attack.

Donald Trump might blow up the world, but Mike Pence would set the clock back to 1954. It’s hard to say which would be worse.

Think Trump is scary? Check out Mike Pence on the issues https://t.co/Mq8YXiPgbN

Pence has been at forefront of right-wing attacks on women's health, LGBT rights, immigrants and refugees...https://t.co/Y4DqlAT9Tj

Think Trump is normalizing bigotry? His running mate, @mike_pence, is one the guys who has already done it. https://t.co/Y3HMEoOeKH

And of course former Daily Show comedian Samantha Bee, whose crass and unfunny show on TBS frequently mocks conservatives and Christians, bashed Pence as anti-women’s rights in this video tweet:

While Vox went with more subtle snobbery of his pro-life position:

In case you forgot: Indiana Gov. Mike Pence signed a law this year that mandated funerals for fetuses https://t.co/4NZamTxLEw

On MSNBC Sunday, Joy Reid and Sirius XM host John Fugelsang blasted Pence as an extremist who, as Fugelsang said, bases his policies on a Christianity that bore no “resemblance to the teachings of Jesus.”

And TIME Magazine and NPR instead decided to attack Pence on Syrian refugees:

Looks like the media got all Hillary Clinton’s attacks against Pence across! It must be easy in the when you have the media doing your dirty work for you.