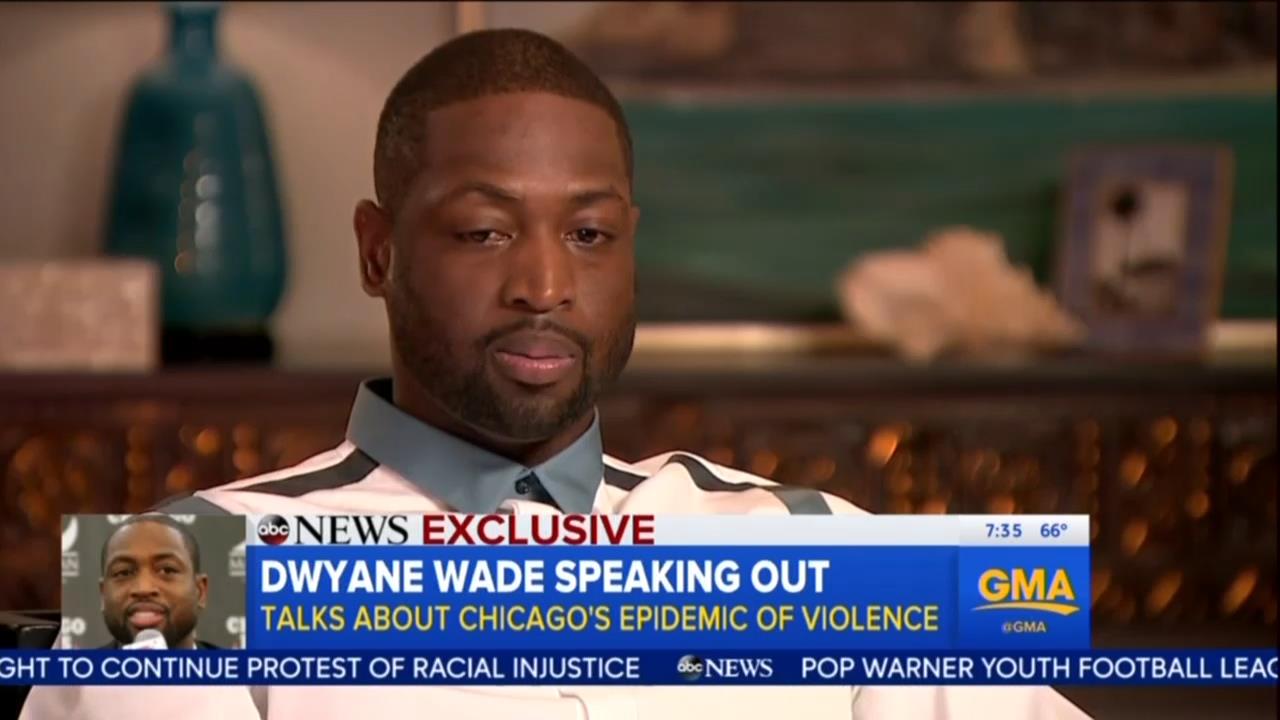 On an interview Friday morning on Good Morning America, ABC’s George Stephanopoulos interviewed NBA star Dwyane Wade, whose cousin was killed by newly released prisoners on the streets of Chicago last week. While Wade proposed a variety of measures to combat violence in cities like Chicago, Stephanopoulos geared the conversation to be about guns, and Trump.

The conversation began with Stephanopoulos bringing up the death of Wade’s cousin and how he used his platform to speak out against violence in Chicago. Stephanopoulos then gave Wade the opportunity to pinpoint the problem on guns, and later, “bad cops.”

STEPHANOPOULOS:  It's such a complicated problem in Chicago. You got gangs, you got guns. You have this distrust between the community and the police. How you deal with that?

Wade instead, made the case that maybe these men shouldn’t have been let out of prison, before suggesting “work programs.”

WADE: My cousin was killed by one of the brothers that got out of prison not too long ago, so you know, guys go to prison then we let them back out on the street.

WADE: They're going to go back to what they're used to and what they know. If it's something we can do with the prison that can help with work programs. When people come out it gives them an opportunity to try to better themselves.

Later in the interview, Wade brought up a lack of mentorship causing “this epidemic” of violence.

WADE: [I] think that's one thing a lot of our kids today is missing, is mentorship. If we want to stop this epidemic, it's needed now.

WADE: [M]y boys are afraid of the police just the same way I was when I was growing up. Not all police, obviously, but, you know, my boys hear everything that's going on in the world. And all the harassment, all the murders that's going on and they pose the question back to me and what answer do I have for them so they know how involved I am in the community so then I take that and I have answers for the city. I go to the mayor and go to the city and say what are we doing to strengthen gun laws, you know, what are we doing to help our police, you know.

STEPHANOPOULOS: Because then you hear the police, they say the police in the city of Chicago, they say, we're fighting a war out there.

WADE: They are. They are fighting a war. And they can do a lot better. But they can get more help as well to do better. There's other cities that have way tougher gun laws. We have weak gun laws and we have to do a better job of being leaders, all of us. The leadership in our world today and our communities is suffering. Big time.

Of course Stephanopoulos had to bring Trump into the equation. Wade didn’t take the opportunity to bash Trump but to parse out how the attention was both a good and bad thing.

STEPHANOPOULOS: This came right in the middle of a presidential campaign as you know and Donald Trump I know expressed his condolences to your family. Also got a lot of reaction for this tweet he sent out where he said Dwyane wade's cousin shot and killed walking in Chicago. Just what I have been saying. African-Americans will vote Trump. What did you think when you heard that?

WADE: Well I was kind of conflicted. You know, it's like on one hand your cousin's death is used as a ploy for a political gain. On the other hand, it's a national story and goes back to that for me. I want eyes on this city. You know, I want us to be able to do more together and only way to do that is more people know what's going on. I was grateful it started a conversation but on the other hand it just put a bad taste in my mouth because of what my family is dealing with and what our city of Chicago is dealing with and it looks like it's being used as a political gain

Unfortunately Wade didn’t seem to realize that ABC was using him for that exact purpose as well.