After the Khan family, a Muslim-American couple whose son was killed while fighting for the U.S. overseas, bashed Trump from the DNC stage last week, Trump in his typical style, escalated the situation by directing his criticism at the Khans. For this, the national media took him to task, hyping the situation and talking about it endlessly for the past five days. CNN, either trying to be balanced or trying to cash in on Benghazi victims bashing Trump, attempted to do so Monday by bringing on Patricia Smith, and Tuesday morning bringing on Charles Woods. Woods was father to U.S. Navy S.E.A.L., Tyrone Woods, who was killed during the Benghazi attack. On CNN Newsroom, host Carol Costello repeatedly attempted to get Woods to ask Trump to “apologize” for his comments to the Khans, but instead of taking the bait, he turned the tables and called on someone else to apologize instead. 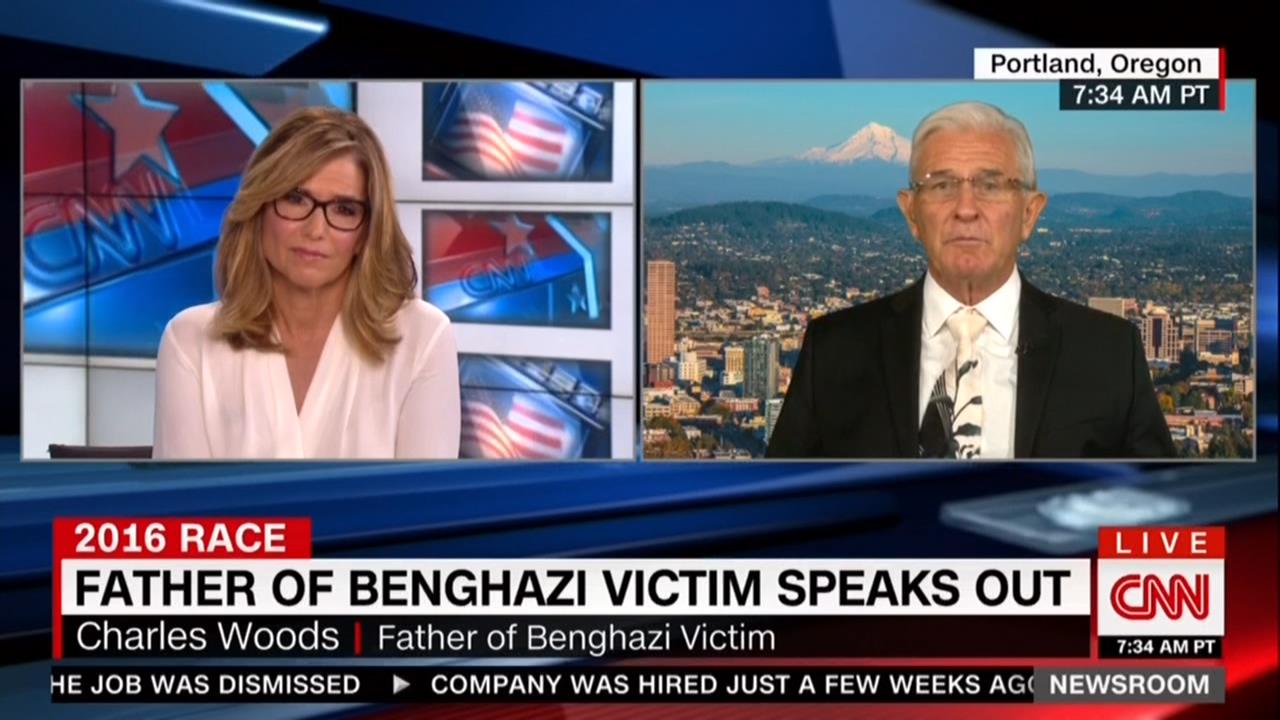 After Woods explained how Hillary Clinton outright lied to him, his family and to the public, shortly after on-camera, blaming the attacks on a Youtube video, Costello responded by asking, “What, sir, would you like Hillary Clinton to say?”

Contrast that with the rest of the interview below, where Costello repeatedly pressed Woods to call on Trump to “apologize” for his comments towards the Khan family.

COSTELLO: Do you think that Mr. Trump should apologize to Mr. Khan?

WOODS: You know, I really don't know what was said. I haven't seen a TV set since last Monday or Tuesday. I was camping with my daughter, taking her to a rodeo so I’m not really sure what was said.

[After playing a clip of Eric Trump on CBS’ This Morning]

COSTELLO: Eric Trump saying his father sort of apologized by calling khan's son a hero and that Donald Trump has also sacrificed for this country.

WOODS: Well, I would agree with what Mr. Trump said. Mr. Khan was a hero, a patriotic American, and he was also a moderate Muslim.

WOODS: Like I say, I don't know what he originally said, and I don't know what he said since then. I know who should apologize, and that would be Hillary Clinton, for lying to the American families who lost their loved ones as well as to the American public. She hasn't apologized for that yet. In fact, she's even doubled down and called us liars which is not appropriate, not at all. Like I say, either she's lying or she has a bad memory.

COSTELLO: Who are you endorsing this election?

WOODS: Well, my son would still be alive if Mrs. Clinton was performing her job properly as Secretary of State. So in good conscience, I cannot vote for the person who was directly responsible for the death of my son. There is only two choices and obviously I support Donald Trump. The main reason is because national security, as well as the economy, are the two most important issues that voters are going to have to decide upon next November.

COSTELLO: Just the last question I'll ask you. Do you wish Mr. Trump would stop talking about the Khans now?

WOODS: Like I said... I haven't watched a TV set since last Monday or Tuesday.

After Costello pressed Woods yet a fourth time, he shut down Costello’s leading questions with his own provocative question.

COSTELLO: He's continued to double down on Mr. Khan.

WOODS: You know...When Hillary Clinton on several occasions has called the Benghazi victims' families liars, should she apologize for that?

On that note, Costello thanked Woods and ended the interview, since she wasn’t getting the answer she wanted. Like with everything in this election, the media is all too ready to hype and devote weeks to Trump’s rhetoric and past, but virtually ignore Clinton’s outright lies and her own scandal-filled past.