GMA Brings On Liberal Donor to Bash Trump, Day 1 of RNC; Will DNC Get Equal Treatment?

On the first day of the Republican National Convention, ABC brought on a former colleague of Donald Trump and admitted “lifelong” liberal donor, to bash the presumptive Republican nominee. On Good Morning America Monday morning, George Stephanopoulos interviewed The Art of the Deal co-author Tony Schwartz, to talk about his recent scathing interview of Trump published in the New Yorker, where he called Trump a “sociopath.” Will ABC give the same treatment to Hillary Clinton next week at the DNC, with their guest choice?

To his credit, Stephanopoulos didn’t throw any softballs to Schwartz, skeptically questioning him to back up his “extreme” statements. Yet this interview wasn’t even close in tone or content to the ABC host’s interview back in April of 2015 with Clinton Cash author Peter Schweizer. The Clinton donor repeatedly hammered Schweizer, even claiming that ABC had done “investigative work” of their own to disprove the claims Schweizer made in his book. Yet the network was more than happy to let a liberal critic of Trump go to town on their morning show, without the excessive badgering like they gave to Schweizer.

More importantly, the fact remains that ABC thought it was a good idea to bring on a vehement liberal critic of this election’s Republican candidate on the first day of the Republican National Convention. It is doubtful the network would give the same treatment to the Democrats' presumptive nominee, by bringing in a former connection and harsh critic of Hillary Clinton, such as ex-Secret Service agent to the Clintons, Gary J. Byrne, for example.

See the full interview from GMA below:

GEORGE STEPHANOPOULOS: Okay, Lindsey, thanks very much. Tony Schwartz joins us from New York. Mr. Schwartz, thanks for joining us this morning. Let’s just get it on the record, you wrote The Art of the Deal, Donald Trump didn't?

SCHWARTZ: I wrote every word of it, Donald Trump made a few red marks when I handed him the manuscript, but that was it. 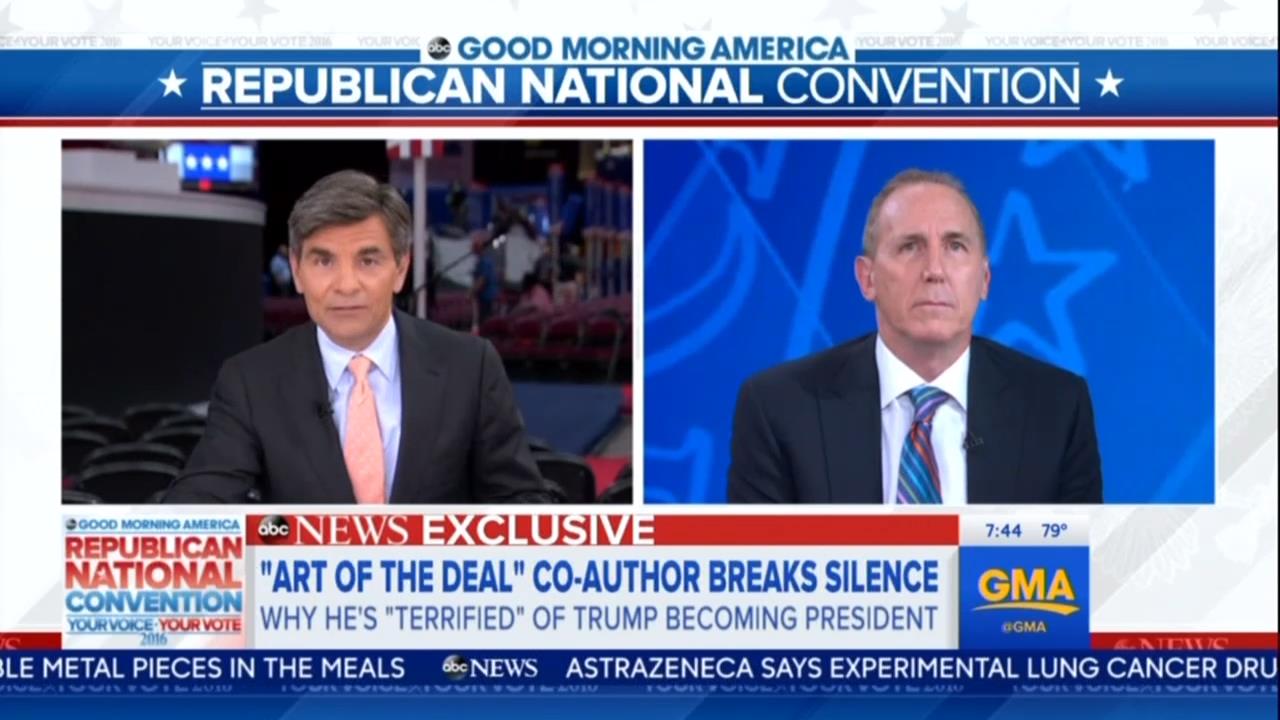 STEPHANOPOULOS: I got to ask you about this sentence you said, “I genuinely believe that if Trump wins and gets the nuclear codes there is an excellent possibility it will lead to the end of civilization.” That is an extreme statement.

SCHWARTZ: You know it's a terrifying thing. I haven't slept a night through since Donald Trump announced for president because I believe he is so insecure, so easily provoked and not, not particularly nearly as smart as people might imagine he is and in the face of somebody like Putin provoking him cleverly because Putin is a heck of a lot smarter than Donald Trump, I do worry that with the nuclear codes he would end civilization says as we know it.

STEPHANOPOULOS: Well give us one concrete example of why it would lead to that kind of anxiety, from your 18 months with him.

SCHWARTZ: Well, he has an incredibly short attention span. He was unable to do interviews with me past 10 or 15 minutes so that finally I had to sit in his office and pick up the phone by the -- eight feet away from his desk to listen in on his calls so I could turn this into a book. The idea we'd have someone with a tiny attention span. My 2-year-old grandson has a longer attention span than Donald Trump is itself terrifying. This is a complex and difficult world just from the events of the last week, George.

STEPHANOPOULOS: I know that Donald Trump called you after he read this article, said you were disloyal and hung up and said “have a nice life.” Let's talk about some of the points he and his supporters will make. Number one, you kept your silence for an awful long time for years for more than a decade and collected millions of dollars on this book. You're a lifelong liberal as you say and you've given money to Democrats year after year after year. You have an agenda.

STEPHANOPOULOS:  If that's the case, why keep your silence for so long?

SCHWARTZ: Because we had a successful experience together. I never in a million years thought he would run for president. Had I thought that 30 years ago I wouldn't have written the book but for 29 years I didn't think he would and it didn't seem like it was important to speak out. I now feel it's my civic duty. I have nothing to gain from this. I made a decision and already have given every dollar of royalties I earned over the last year since he announced for president to a series of nonprofit causes aimed at the people whose rights Donald Trump wants to abridge. Immigration, immigration groups and the like.

SCHWARTZ: You know, no, I suspect there are quite a number of things that were false. I mean right in the middle of while I was writing it he was telling me great stories about his three casinos and how successful they were while at the very same time all three of them were going bankrupt so, no, it's full of falsehoods.

STEPHANOPOULOS: You regret writing the book?