In another case of liberals justifying violence, Huffington Post writer Jesse Benn penned this gem entitled, “Sorry Liberals, A Violent Response To Trump Is As Logical As Any.” In it, Benn argues that liberals don’t understand that violence is sometimes, the answer. “They ignore the history of successful violent insurrection in the US, instead favoring the elementary school version of history in which nonviolence is the only means of struggle that’s ever achieved a thing,” he wrote. 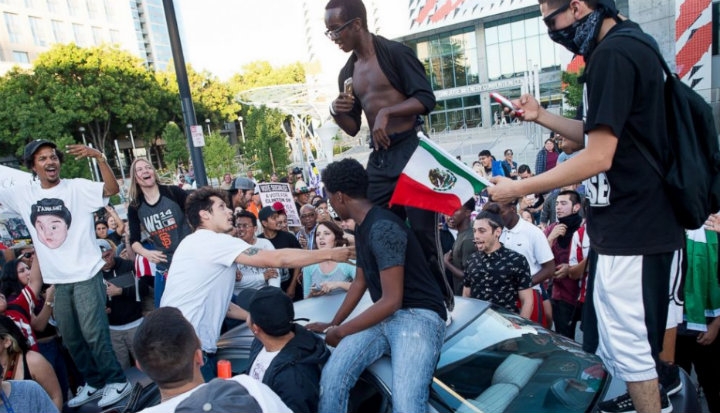 So what examples of “successful violence” did Benn cite? He goes on to claim the 1992 Rodney King riots and the latest violence in Ferguson and Baltimore, among other cases, were “legitimate” and “meaningful” protests. Despite the fact that not only were cities and businesses destroyed, but dozens of people actually died in these protests. According to Benn, that’s A-Okay.

Point three. Violent resistance matters. Riots can lead to major change (*note the irony of that hyperlink going to a Vox article). It’s not liberal politicians or masses that historians identify as the spark underlying the modern movement for LGBTQ equality. Nor was it a think piece from some smarmy liberal writer. It was the people who took to the streets during the Stonewall Uprising. It was the Watts Rebellion, not the Watts Battle of Ideas, that exposed the enduring systemic neglect, poverty, inequality, and racism faced by that community. Similarly, it was the LA Uprising, not the LA Protests, that led to significant changes in the Los Angeles Police Department. More recently, the Ferguson and Baltimore Uprisings both helped prompt the Justice Department to investigate their corrupt police forces. And since we’re talking about fascism, it’s worth remembering that it wasn’t the election of a moderate centrist (hello, Hillary) or a sanguine protest that stopped its ascent in Europe. It was, primarily, the Russian military, and to a lesser extent the US military; neither of which practiced nonviolence if memory serves.

To finish his rant, Benn actually scolded his potential critics from the left for not recognizing their “privilege” as a stumbling block in terms of them seeing the bigger picture. Benn lectured that it may be hard “to understand” if you’re a person of “privilege” (ie: white) but “oppressed peoples” have a “valid” response in the form of “violent resistance.” So basically, if you want to call out Benn for advocating violent mob-rule, you are being a racist who simply doesn’t understand what must be done.

Last, I want to briefly note the problematic nature of people with privilege condemning violent resistance to Trump as an absolute moral failing, or denying its logic. Whether you would personally engage in violent conduct matters little to your ability to understand where it comes from. Some people have the privilege to consider the implications of Trump’s rise in the abstract and negotiate which means are necessary. That’s not true for everyone. And when those who hold that privilege dismiss the potential validity or logic of violent resistance, it’s effectively an effort to dictate the rules under which oppressed peoples respond to existential threats, and to silence forms of resistance disagreeable to privileged sensibilities. Don’t be that liberal.

All of this is ironic from the Huffington Post, which seems to pick and choose what kind of violence is acceptable and which is not. For instance, they consistently bash the NRA for “valorizing” gun violence, yet at the same time they are fine with rioting in the streets that often results in injuries and death? And like many in the media, Huff Po considers “hate speech” more dangerous than actual, physical violence, such as when they started an “Islamophobia tracker.”

But Huff Po wasn’t the first liberal media outlet to advocate for anti-Trump violence. Vox editor Emmett Rensin was suspended by his employer after the backlash that ensued after he wrote an article praising the violence in San Jose.