Well that’s not something you see every day. An A-list actor led Hollywood celebrities at an awards show to give a standing ovation to an American war hero in the audience. At the Spike TV “Guys’ Choice Awards” June 7, Mark Wahlberg accepted the “Troops Choice” award and spent his whole time on stage thanking and praising the U.S. military and former Navy SEAL Marcus Luttrell.

Wahlberg recently starred in Luttrell’s true-life story told in “Lone Survivor,” and is starring in the upcoming “Transformers 4: Age of Extinction.”

Video after the jump.

(Editor’s Note: This article contains language that might offend some readers)

Wahlberg has been outspoken in his support for the military and veterans. Last November during a Q&A at a premiere for Lone Survivor, Wahlberg publicly called out Tom Cruise for comparing his training as an actor to the training Navy SEALS undergo.

You don’t. You know? For somebody to sit there and say, "Well, my job was as difficult as somebody in the military." How fucking dare you, you know, while you sit in a makeup chair for two hours.”

Marcus Luttrell, the hero behind Lone Survivor, ironically shouldn’t  be a friend to Hollywood, as he is both a former member of the military, and a critic of the liberal media. In his book, he frequently attacked the media for making the U.S. military’s job more difficult and more dangerous in how they misreported issues and mischaracterized the enemy during the war in Afghanistan. 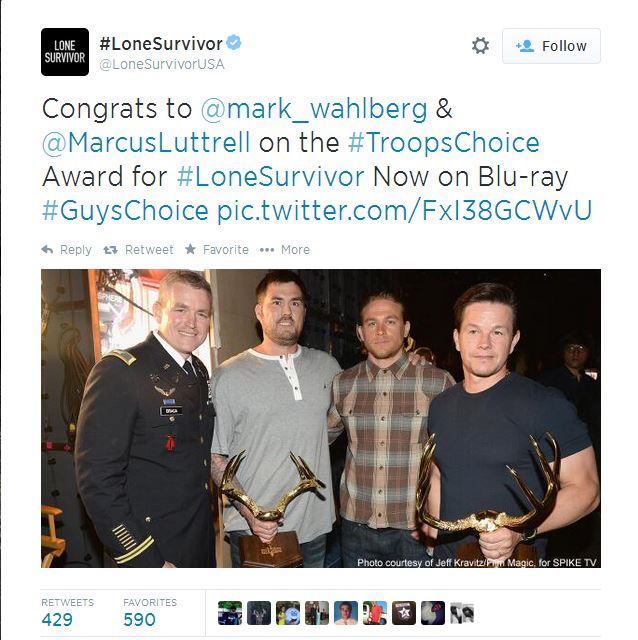 (Transcript below starts about 2:15)

“First and foremost, I would like to thank anybody who’s ever walked into a recruiting office, signed up to defend our great nation. Men, women [applause]. If you’re fortunate enough to be in the business that I’m in, sometimes, you know, you can take yourself and your work a little too seriously. And it’s important to take it seriously, but it’s definitely not fair to compare what we do with what these guys do. It’s a whole ‘nother level. I was fortunate enough to be part of this movie, to tell Marcus’ story and tell the story of the other 19 guys  who didn’t make it off the mountain that day. I was fortunate enough to go to Afghanistan myself before I ever had a chance to meet Marcus, to go and thank some of these soldiers personally, and every chance we get we need to make sure we honor them, through our appreciation on a daily basis. Please if you get a chance, donate to The Wounded Warriors, donate to the Lone Survivor Foundation and more importantly, if you're in a position to hire a veteran.

Marcus is here tonight. He’s a humble guy. He’s never one to want a pat on the back. Every time I go and tell him, ‘thank you’ for what he did, he usually wants to smack me or something, but he’s a great man and it was always about his brothers, never about him and that was what we wanted to do. We wanted to tell their story. We’re lucky to be a part of it. So please everybody stand up, give Marcus his proper due.”