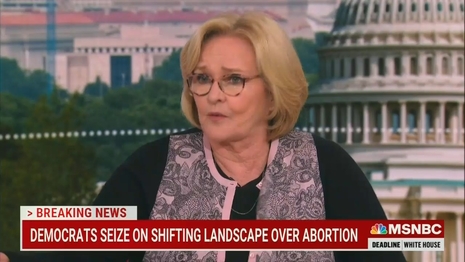 MSNBC’s Deadline White House took a break from obsessing over former President Donald Trump on Tuesday afternoon to continue their four-month-long freak-out over the Supreme Court overturning Roe v. Wade and lashed out at Republican legislatures for passing laws in their states to protect the lives of the unborn. Since there are few things in life the left treasures more than abortion, including up to the minute of birth, vile leftist host Nicolle Wallace and failed former Senator Claire McCaskill wailed over the rotten and extreme Republicans who want to save lives.

Wallace started by shrieking that pro-life laws “pulls the curtain back on this really rotten core on the right” and claimed these Republicans “were skulking around Republican politics for decades, and then they have their moment because the party has pushed out anyone normal and it's totally beholden to the far right extremists.”

Of course, Wallace never explained how protecting the lives of the most vulnerable makes someone a “far-right extremist” or part of the “rotten core on the right.”

She then twisted herself into a pretzel by tying supporting the right of unborn babies to live to people holding up “let’s go Brandon” signs, or their more vulgar alternatives. “I can't imagine growing up that there would be a political rally where they would hold up signs that would say the F you word to the sitting President, and they'd all hold them proudly,” McCaskill cried.

It’s amazing how the leftist media is more offended by people swearing at Joe Biden than they are at people killing their babies.

This disgusting anti-life segment on MSNBC was made possible by Progressive. Their information is linked so you can let them know about the kind of “news” they fund.

NICOLLE WALLACE: Claire, it also pulls the curtain back on this really rotten core on the right, that the kinds of people who wrote the vigilante law in Texas, they were skulking around Republican politics for decades, and then they have their moment because the party has pushed out anyone normal and it's totally beholden to the far right extremists, Abbott, and the legislature there let these people in.

The folks writing the laws without exceptions for rape and life of mother, same thing they've skulked about in the shadows, but people who could articulate the perils to anyone who wanted to take advantage of the incredible science behind IVF or surrogacy or anything like that said you can't do that. Unforeseen consequences. What do you make of what it reveals? And I feel this is part of what voters are intuiting it's like, oh, that's who the Republicans have become.

CLAIRE MCCASKILL: Yeah, the extremism, and it's on a number of fronts, but abortion, especially when you're talking about rape and incest because, you know, there isn't a mother alive who's not -- doesn't have that fear that one of their daughters --

MCCASKILL: Or father has a fear and so that becomes real and palpable. But extremism is a thread running through the Republican Party right now. Extreme stuff, breaking of norms, a lack of civility. You know, can you imagine when -- I mean, I'm older -- much older than you are. I can't imagine growing up that there would be a political rally where they would hold up signs that would say the F you word to the sitting president, and they'd all hold them proudly. What is that?

MCCASKILL: Republicans who see that, that's not -- they don't like that either. They don't like that kind of coarseness. They don’t like that and so I really do think that this is going to be an election that is gonna judge the passion of the extreme on the right to the mobilization of the rest of the country to say we're going to reject it, and I didn't see it coming, but after Dobbs, I see it pretty clearly now, and I particularly see it in states where Florida, North Carolina, Pennsylvania, Ohio, Wisconsin, you know, they thought they could win Arizona. Well, they've got a guy out there who's scrubbing his website to take abortion off his website, the Republican because he knows he's in trouble.

WALLACE: And anyone tied to Trump is tied to overturning Roe because Trump did it with his three appointees.

MCCASKILL: Absolutely. And stated clearly that was the deal he made with the devil, even though we all know Donald Trump is pro-choice. Always was. He made a deal with the Federalist Society that he would publish the name of lists and that is why Mitch McConnell sat down and quit agitating about it.

WALLACE: I remember being on Morning Joe and Mitch McConnell pulled out his crumpled piece of paper and that was his rationale for supporting Trump.