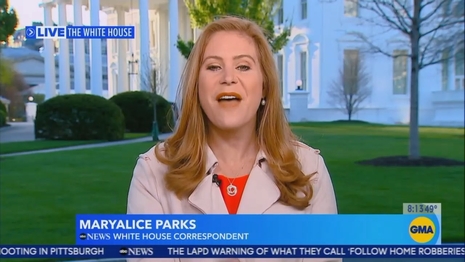 A sympathetic Janai Norman lamented how rising fuel prices are “putting President Biden in a tough political spot.” White House correspondent MaryAlice Parks in her report, noted how the Biden administration’s decision to “restart the sale of onshore leases for oil and gas drilling on federal lands” was “upsetting environmental activists in the President's Democratic base.”

Attempting to make excuses for reversing a decision he probably shouldn’t have made in the first place, and trying to appease radical environmentalists in the Democratic Party, Parks let viewers know that the “White House [is] saying their hands were tied.”

She then downplayed the effect Biden’s new decision will have, noting “it's unclear at what point, if ever, these new leases will equate to more production.”

This biased segment was made possible by Kohl's. Their information is linked so you can let them know about the biased "news" they fund.

To read the transcript of this segment, click "expand":

MARYALICE PARKS: The Biden administration set to restart the sale of onshore leases for oil and gas drilling on federal lands. 144,000 acres of public lands will be up for lease in these nine states. The move upsetting environmental activists in the President's Democratic base. The decision a clear departure from this 2020 campaign promise.

PARKS: But the White House saying their hands were tied. The President did sign an order pausing the sale of new leases when he came into office. A federal judge in Louisiana said they had to go forward. The decision this week coming while gas prices are spiking. The White House facing political pressure to look for ways to super charge domestic production. Still given his pledges to curb greenhouse gas emissions environmentalists are fuming.

NICOLE GHIO (SENIOR FOSSIL FUELS PROGRAM MANAGER, FRIENDS OF THE EARTH): There's no way for Biden to meet his campaign climate promises as well as his international commitments unless he actually addresses leasing on public lands, and the first step is stopping new leasing.

PARKS: The Department of Interior insisting they worked to thread a careful needle, raising the royalties of the plots for the first time nearly 50 percent, promising to include the input of tribes and taking environmental concerns into account like never before. And only a small fraction of the land oil and gas industry leaders had hoped for ended up included.

FRANK MACCHIAROLA (VICE PRESIDENT, AMERICAN PETROLEUM INSTITUTE): The announcement is mixed signals from the administration regarding leasing. This is a first step, but they need to do much more.

PARKS: And one major point of frustration for this White House and Democratic lawmakers is the fact that oil and gas companies already hold and lease hundreds of thousands of acres that they do not currently use. Have not started to develop. It's unclear at what point, if ever, these new leases will equate to more production. Still, these new leases set to go on sale as soon as tomorrow. Whit?