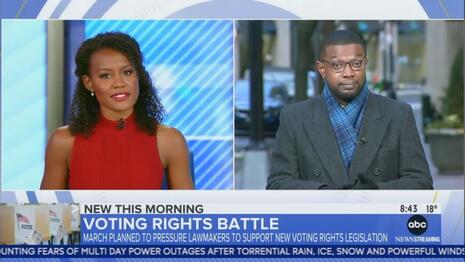 On Sunday morning, ABC's Good Morning America continued their smear campaign against many of the election integrity bills being passed in Republican-controlled states across the country.

During a segment on the Biden administration’s never-ending crusade to pass their election power grab legislation through Congress,  co-anchor Janai Norman declared the “voting rights battlefront and center in Washington this week.” Before turning to ABC correspondent Alex Presha’s report on Biden’s so-called “Freedom to Vote Act”.

After summarizing the contents of the Democrat-supported legislation, Presha then reported how “at least 19 states passed 34 laws restricting access to voting.” Presha went on to inaccurately report that “Georgia now criminalizes handing out water to voters waiting in line.”

This has been a common lie the leftist media have told ever since Georgia passed their election reform legislation.

As Fox News senior editor David Rutz reported back in April, the Georgia “law allows poll workers to provide self-service water from an unattended receptacle within 150 feet of a polling place, but it prohibits people from actively distributing food and drink within that distance, as well money or gifts.”

That wasn’t all, Presha also whined that “Texas banned 24-hour drive-through voting which was originally created to provide a safe way to vote during the pandemic.” Apparently, certain precautions that were taken during a once-in-a-lifetime pandemic should be permanent according to ABC.

If that wasn’t pathetic enough, Presha interviewed an Orlando resident and convicted felon who served eighteen months in prison for drug trafficking and let her complain that the Florida legislature wouldn’t let her vote because she hadn’t paid the “nearly $53,000, fees related to her conviction.”

Perhaps we know why ABC is pushing so hard for felons to vote, and for the passage of the “Freedom to Vote Act”. By their own admission, there are “770,000 felons there who’ve served their time, but are denied their right to vote until their debts are cleared. It's a population large enough to change an election.”

This segment of an ABC reporter cheerleading for the Democrat election power grab legislation, while also lying about GOP election integrity legislation was brought to you by Otezla, and Liberty Mutual. Their information is linked so you can let them know about the biased news they fund.

To read the transcript of this segment click “expand”:

JANAI NORMAN: Welcome back to GMA and the voting rights battle front and center in Washington this week. We've heard so much about it as lawmakers try to hash out an agreement. We look at the Freedom to Vote Act, and how it could impact the way you cast your ballot. ABC's Alex Presha is in Washington with more.

PROTESTER: What do we want?

PROTESTER: When do we want it?

PRESIDENT JOE BIDEN: I hope we can get this done. The honest to god answer is I don't know.

PRESHA: The Senate set to debate Tuesday, but the bottom line is right now Democrats are struggling to advance their legislation, including the Freedom to Vote Act. The bill would create a national standard for voting, designate election day as a federal holiday, and restore voting rights to the formerly incarcerated. Since the 2020 election, a number of states have taken action that critics warn restrict access to the polls. In fact, at least 19 states passed 34 laws restricting access to voting. Georgia now criminalizes handing out water to voters waiting in line. Texas banned 24 hour drive-through voting which was originally created to provide a safe way to vote during the pandemic. Both states now being sued by the Department of Justice. And in Florida, after voters approved an amendment restoring voting rights to most felons, state Republicans enacted new restrictions, requiring those felons to first pay back their financial legal obligations before being allowed to cast a ballot.

JUDY BOLDEN: That's not what we voted for.

PRESHA: Judy Bolden of Orlando spent eighteen months behind bars for drug trafficking two decades ago. She's been free ever since, but is ineligible to vote saying she owes nearly $53,000, fees related to her conviction.

PRESHA: She's 1 of more than 770,000 felons there who’ve served their time, but are denied their right to vote until their debts are cleared. It's a population large enough to change an election. Former President Trump won Florida in 2020 by just over 370,000 votes. Those like Bolden are looking to Washington to intervene.

BOLDEN: I want to be able to let my voice be heard not only for me, but for those that can't vote.

PRESHA: Republican supporters of many of these new voter access restrictions say they're meant to ensure secure elections, but critics counter that they make it harder for mostly minority voters to exercise their rights. Janai?