As many in the mainstream media continued to panic over President Trump’s “fire and fury” comments over North Korea, others in Congress began actively looking for ways to impede the President’s ability to protect the nation. One of these was Democratic Senator Ed Markey of Massachusetts, who appeared on Thursday’s edition of Morning Joe to discuss these plans. Markey stated that he feared Trump’s comments had left “the impression that nuclear weapons are usable, and they're usable even if the United States is not attacked by nuclear weapons.” Markey continued on, with no pushback, explaining his intention, along with left-wing Congressman Ted Lieu, to transfer the power of the nuclear strike from the president to Congress.

“It would be a Strangelovian world that we would enter that a President would be allowed to use nuclear weapons,” Markey emphatically warned before downplaying the North Korea threat as merely being a “conventional weapons movement.” The full dialogue went as follows:

SAM STEIN: Senator, Sam Stein here. I want to talk about your legislation. And I have two questions. One, describe for the viewers' edification here what the chain of command is when a president orders a nuclear strike. Are there any checks and balances? And then secondly, I know your legislation is to introduce or to prohibit first strike capability for a president. In the wake of Trump's comments, have you seen any renewed interest or new interest among your colleagues in the senate or perhaps in the house for Ted Lieu in co-sponsoring this bill?

This goes to the role which the congress constitutionally should play in the declaration of war. We've allowed for the power with regard to conventional war to slip away from us, unfortunately, but with regard to the use of nuclear weapons where we have not been attacked with nuclear weapons, it would be a Strangelovian world that we would enter that a President would be allowed to use nuclear weapons, unleashing a fury of power that has never been seen in the history of the planet in response to threats from another country, in response to conventional weapons movement by another country. It would just be catastrophic for the planet, and that's why I believe we need constraints on the use of nuclear weapons.

WILLIE GEIST: All right. Ed Markey, Democrat of Massachusetts who sits on foreign relations. Senator, thanks so much always.

It should be noted that the Senator mentioned that he is co-sponsoring this particular proposal with Congressman Ted Lieu of California. This is notable due to the fact that, even in the age of Trump, Lieu would likely very take the gold in terms of craziest tweets by any member of Congress. Here are some examples: 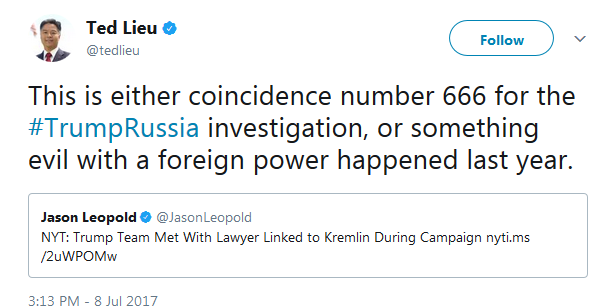 The fact that Markey apparently believes that he, Lieu, and our dysfunctional congress are qualified to make decisions on how to use nuclear arms is something most would likely think deserving of some sort of debate. Despite this, however, none of the Morning Joe panel offered so much as a peep in response to Markey’s comments. The response by many in the media and those on the left to attack the commander-in-chief as opposed to the man threatening to attack the country is both astounding and reprehensible. It’s even more incredible when one considers that the very threat posed by North Korea rose while under the watch of many of these same sanctimonious hypocrites.

This biased segment of Morning Joe was brought to you by Birds Eye, Green Mountain Coffee, and Office Depot.