President Obama essentially "phoned it in" Tuesday with his lackluster response to the terrorist attacks in Brussels, MSNBC host Chris Matthews suggested on the Tuesday edition of Hardball.

"I grew up in a big city, Philadelphia, which I'm proud to always say. And Peter – Congressman King understands this, when there's a big fire, you want to see the mayor on the other curb, watching it" as well as the police and fire chiefs. "You don't want to hear they phoned it in,"  Matthews insisted, adding, "The president was off base today."

"What could he have done better than taking a minute away from a baseball game? He had to do something," Matthews complained.

"I would agree with your analogy," Capehart replied, had the bombing "happened in the United States." 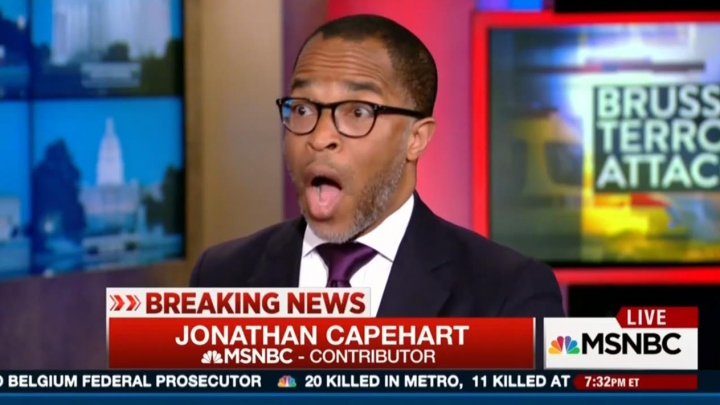 "Look, Donald Trump has nothing else to do but run for president. Barack Obama is the president of the United States and has to be able to do more than one thing at one time," huffed Capehart.

Apparently Capehart thinks keeping abreast of U.S. intelligence and military efforts to aid Belgium in the wake of the terror strikes is something the president can capably do in between eating cracker jacks and doing the wave with Raul Castro.

Moments later, Capehart again complained after guest Rep. Peter King (R-N.Y.) complained that "the president should have done more to show solidarity with Belgium and with Western Europe against the, really an attack against Western civilization."

An exasperated Capehart laid out his complaint about how "every time something happens," Republicans jump to the attack. At the end of this exchange, however, Matthews had the final word by saying that maybe Democrats commit the political "sin" of "defend[ing] him on every front" (emphases mine):

CAPEHART: Every time something happens, not just in the United States, but around the world, the common refrain is, "The president needs to do more. The president wasn't there –

MATTHEWS: This time I don't think it's fair.

CAPEHART: No, no, it happens all the time, Chris. And I think it's unfair.

MATTHEWS: You know what politics is about.

CAPEHART: No, I know what politics is about.

MATTHEWS: It's about appearing to be doing the right thing.

CAPEHART: Well, right, but it also, it seems to be from Republicans –

MATTHEWS: I know, it's endemic!

CAPEHART: – is to, is to constantly, constantly kick the president for not doing something that they think he should do for political reasons.

MATTHEWS: There might be another sin there, too, to defend him on every front. Just a thought.