Chris Matthews a Birther Now That Target Is Cruz? Trump 'May Have Something' He Insists

Enjoying what he sees as Ted Cruz's just deserts for not having publicly called out Birthers who questioned President Obama's constitutional eligibility for office, Hardball host Chris Matthews on his January 11 program reveled in Donald Trump's hammering away at questions of Cruz's eligibility, given that he was born to his American citizen mother while she was living in Canada, "Trump may have something" when he levels the question about Cruz's eligibility.

"Facts matter," Matthews insisted, even as he copped to the fact that the reason he was "enjoying this to some extent is, there's a little bit of payback, a little bit of blowback going on here."

The MSNBC host pegged a good chunk of his belated approval of Cruz birtherism on liberal constitutional law professor Laurence Tribe – who once taught Ted Cruz at Harvard – and his noting that the Supreme Court has never adjudicated the matter of what natural-born citizenship means vis-a-vis presidential eligibility.

At one point in his segment devoted to the topic, Matthews also suggested that Trump might get traction out of reminding Iowa Republicans that Cruz's given name is Rafael, which, apparently, is too "ethnic-sounding" for provincial "homeschooled" Midwestern conservatives.

Here's the relevant transcript (emphases mine) and video:

MATTHEWS: Good evening, I'm Chris Matthews in Washington. What's the worst thing a guy like Donald Trump can call you? How about illegal immigrant. Is that roughly what he's calling Ted Cruz? An immigrant trying illegally to become president.

Is he saying that the Canadian-born Cruz, who came down here from Calgary, is running for president, even though the Constitution says you have to be natural born to serve in the country's highest office?

MATTHEWS: I have a thought here. In the next several days we're going to find out how this thing tests. Hallie, we're going to find out what Cruz is trying, rather what Trump is trying, whether it works or not. And whether it works with those very conservative people, you know, very isolationist, very home-grown, homeschooled people, that don't like foreigners and strange people around them, all the sudden say, "wait a minute, I didn't know." We'll see. 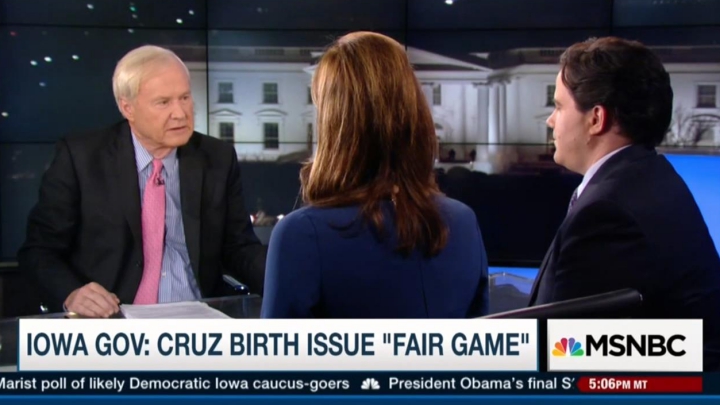 MATTHEWS: Remember how George Bush Sr. Made fun of, made sport of Pete DuPont when he called him during the debate, "let me help with you that one, Pierre"? Do you think Rafael's gonna hurt him with some people up there in Iowa? Rafael's his real name. I mean Ted sounds much more [unintelligible] and regular.

MATTHEWS: This is a world I don't know.

COSTA: One of his biggest assets in Iowa is his father, Rafael.

HALLIE JACKSON, NBC News: Given the evangelical community and the [unintelligible] churches.

MATTHEWS: So the Latino background doesn't bother people? And the Canadian roots?

COSTA: They know, and his father is Rafael Cruz and he goes around Iowa getting pastors to sign up.

MATTHEWS: We'll see. We'll see. We're going to find out all this. But, you know, every time we read something about Iowa Republicans, it's very culturally conservative and very much resistant to anything new and ethnic-sounding.

The reason I'm enjoying this to some extent is, there's a little bit of payback, a little bit of blowback going on here. The people that enjoyed like hell the 20, 30 percent of the country, close to 30, who let the president be pilloried out there as some of interloper, some usurper who came here some magical way through Kenya are now saying we shouldn't bring this up about Cruz.

JACKSON: So you're saying Cruz is getting a taste of the Trump medicine now?

MATTHEWS: Yeah. And he never once fought it before when it was not attacked on him.