With the Bureau of Labor Statistics releasing December 2015 jobs numbers today, numerous news agencies flashed out the fresh stats to their breaking-news alert subscribers. Looking at them on my iPhone this morning, I noticed that the New York Times was unique in puffing the development with editorial language rather than sticking strictly to the facts.

Contrast how the Times delivered the story with Politico, WTOP radio [an all-news station in Washington, D.C.], and the Wall Street Journal, respectively:

It's a minor quibble, perhaps, but the Times also mistakes new jobs for new "workers." Some of the new "workers" might be those who have been long out of the workforce. Others might be employed at a second job, which means you're not adding another "worker" but employing a previously underemployed person at another job.

At any rate, hailing "an impressive sprint capping off a year of solid job growth" seems the sort of copy you'd expect from the White House communications shop, not an ostensibly objective newspaper, particularly given the fact that, as the Times itself reported in covering the new jobs data (emphases mine):

The unemployment rate stayed at 5 percent last month, the Labor Department said, but that was mostly because large numbers of people went looking for work.

That trend has contributed to record low labor participation rates, which barely ticked up to 62.6 percent last month. 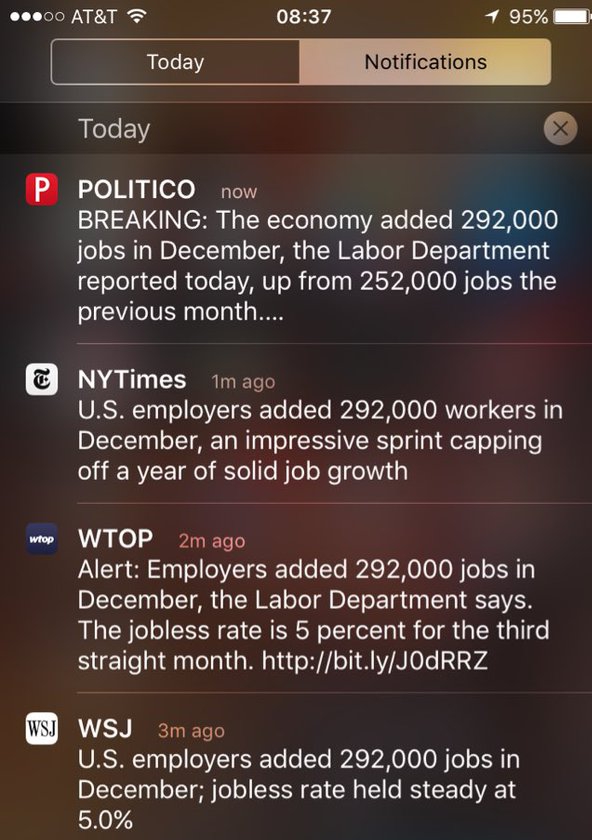