WashPost Devotes Gooey 12-Paragraph Story to Obama Car Photo-Op, No Mention of Democrat Standing Him Up

On page A7 of the July 16 paper, Washington Post staff writer Juliet Eilperin hacked out 12 paragraphs of goo over President Obama's Tuesday visit to the Turner-Fairbank Highway Research Center in McLean, Va., where he "[made] a case for pouring more federal funds in U.S. infrastructure" and also got behind the wheel of "a self-driving car stationed at a simulator." "Man, this is so exciting.... I haven't been on the road in a long time," Eilperin quoted the president, who added a 1980s pop-culture reference. "It was sort of like 'Knight Rider,' Eilperin quoted Obama, noting  that it "[prompted] laughter from a crowd of nearly 200 of the center's employees."

One person not chuckling, however, was John Foust. He's the Fairfax County Democrat running for Congress in the district where the facility is located. The Weekly Standard notes that the Democrat was curiously absent from the presidential visit, eschewing the opportunity for a photo op with the president in a district Obama carried twice (but which is represented currently by Republican Barbara Comstock  retiring Republican Congressman Frank Wolf):


Now comes the news that even in Northern Virginia, the liberal region outside of Washington that's transformed the Old Dominion into a blue state, Democrats are shying away from Obama. The president appeared in McLean in Fairfax County (60 percent support for Obama in 2008 and 2012) on Tuesday to call for action on extending the federal Highway Trust Fund. But where was the Democrat running for McLean's open House seat? John Foust is a member of the Fairfax County board of supervisors and lives in McLean, but the Democrat and House hopeful was "noticeably absent" from the Obama transportation event...

In a July 10 The Debrief blog piece, Eilperin observed how "More than five years into his presidency, Obama is trying to free himself from the constraints of office, whether by strolling on the Mall or hopscotching the country as part of a campaign-style tour."

Judging by today's story, it seems perfectly clear this mix of wanderlust and gimmicky photo-ops has worked its magic on Eilperin. 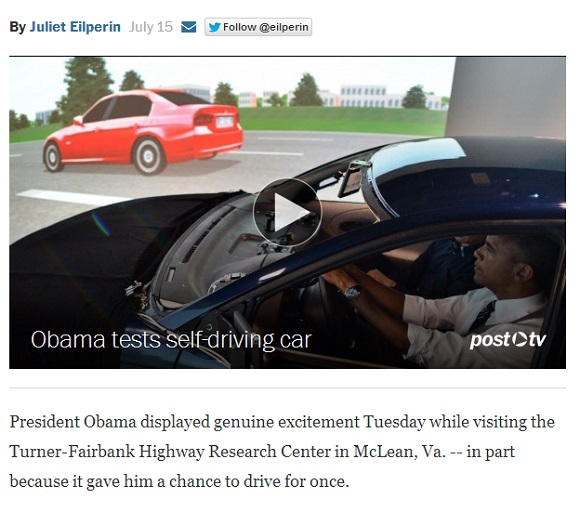 Correction: An earlier version of this story erroneously noted Barbara Comstock as a sitting U.S. congresswoman. She is a Republican member of the Virginia House of Delegates and is the GOP nominee in the congressional election in November which will replace moderate Republican Frank Wolf, who is retiring.