According to MSNBC's Chris Matthews, "in July of 1971, President Richard Nixon signed the 26th Amendment into law, making 18 the [minimum] age to vote." The Hardball host made this pronouncement as he introduced a segment attacking new legislation in North Carolina which liberal activists charge violates that Amendment.

But of course, it's patently false that Nixon signed the amendment "into law." Indeed, no president signs any ratified amendment into law. Ratified amendments take effect immediately either "when ratified by the legislatures of three fourths of the several states, or by conventions in three fourths thereof," depending on which manner the Congress proposed when introducing the amendment. What Nixon did on July 5, 1971 was witness the certification by the administration of the General Services Administration that the requisite three-fourths of the nation's state legislatures had ratified the Amendment. From Nixon's remarks that day, via the American Presidency Project (emphasis mine; YouTube video below page break):

It Is a great privilege to welcome this very exciting group to the White House on the day that we celebrate our national Independence Day. It seems to me that it is particularly appropriate that on this same day we are certifying the 26th Amendment to the Constitution of the United States.

That Amendment, as you know, provides for the right to vote of all of our young people between 18 and 21-11 million new voters as a result of this amendment that you now will see certified by the GSA Administrator.

Now, the custom on certification of an amendment has varied through the history of this country. Always, of course, the certification is provided, but as far as witnesses are concerned, sometimes the President witnesses it--usually he has in recent years--but I understand a President has a prerogative to ask for additional witnesses if he likes.

On this occasion, therefore, I am going to ask that three of the representatives of this group who are 18 years of age or older--and I understand you range from 15 to 20, so we picked three 18-year-olds. We have worked this out so that you know it is absolutely fair, by lot, through checking with Mr. Ramsey, your choir director. They cover all parts of the country. If these three would step forward as I call their names and stand beside me on my left: first, Julianne Jones from Memphis, Tennessee; second, Joseph Loyd from Detroit, Michigan; and third--incidentally, I don't think this was an accident--we have one from California, and it is Paul Larimer from Concord, California.

[At this point, Robert L. Kunzig, Administrator of General Services, signed the certification of the Amendment, and the President and Julianne Jones, Joseph W. Loyd, Jr., and Paul S. Larimer of the "Young Americans in Concert" signed as witnesses. The President then resumed speaking.] 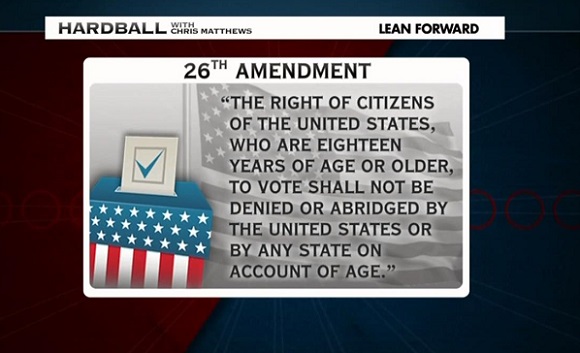