More than one panelist opined that it's not just that journalists tend to be liberal on policy questions but that they live and work in environments which are socially liberal. "I live in northwest Washington, none of my neighbors are evangelical Christians [and] I don't know a lot of people in my kid's preschool who are pro-life," New York Times writer Mark Leibovich noted. Fellow Washington, D.C.-based journalist Jake Tapper picked up on that thread:

A certain type of person becomes a reporter, and generally speaking... the kind of person who is a reporter in Washington, D.C., or New York City has never worked a minimum-wage job outside of high-school... has never experienced poverty, is not an evangelical Christian, like much of the country is.

There are a lot of experiences that the kinds of people who are reporters, editors, producers, etc., in Washington, D.C., and New York City have not had.

Of course, Tapper added in defense of his brethren in the industry, despite the lack of diversity in the newsroom, rank-and-file reporters really do want to be fair and balanced:

After Tapper said his piece, New York Times writer Peter Baker chimed in, saying that he has evangelical Christians in his extended family, suggesting that he, at least, is not oblivious to  the perspectives they tend to have. Baker did, however, argue that bias for "conflict" was more salient to journalists than their liberal media biases, a typical defense waged by liberal journalists. After all, here at NewsBusters, we've documented time and again how the media ignore stories of conflict which paint liberals in a negative light.

All in all, however, it's progress to see prominent journalists admitting a slant in the newsroom. I would submit, however, it's not enough for liberal journalists to attempt to be fair and balanced. A commitment to hiring conservative and libertarian journalists to mix things up a bit can help immensely in challenging the political and cultural groupthink that exists in the major media outlets.

To watch the full panel segment, click play on the embed below: 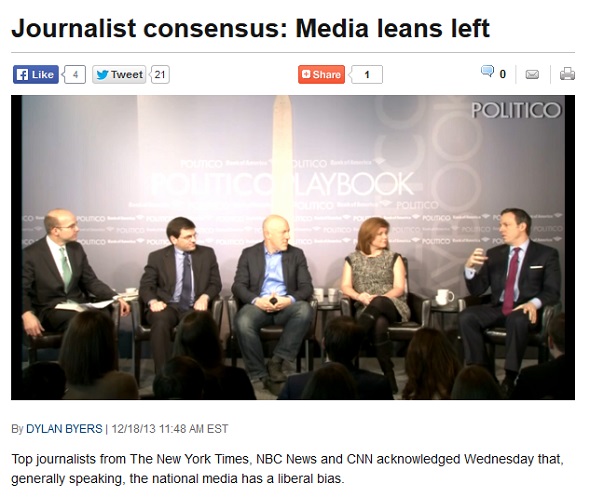