Last December, my colleague Matt Vespa took on Washington Post EcoLOGIC columnist Brian Palmer for his attack on Christmas tree farms. One year later and Palmer is still a grinch, this time lecturing readers about the virtues of eschewing incandescent Christmas lights for LED bulbs.

But not only did Palmer preach the merits of energy -- and money-saving -- LED bulbs, he also crunched the numbers and wrung his hands about the detrimental effects on Mother Nature of, wait for it, strands of popcorn strung around the ol' Tannenbaum  (emphasis mine):

[T]here are more extreme options for electricity grinches. When I was a child, my favorite tree adornment was a string of popcorn. Making such a thread is a fun family activity, and you can sneak a few kernels for yourself in the process.

Is it greener than a strand of lights, though? To make this comparison, we’ll have to make some assumptions.

It’s hard to say how much embedded energy is in a strand of Christmas lights. However, since the lights will last 40 or 50 years, that embedded energy comes very close to zero on a yearly average. The only energy we have to attribute to the lights is the electricity, which, for a strand of larger LEDs, is 2.5 watts. If you run them four hours per day for 30 days, that means 0.3 kilowatt-hours over the course of a season. According to EPA conversion data, generating that much electricity would emit 0.44 pounds of greenhouse gas equivalents. (A carbon dioxide equivalent is all the greenhouse gases emitted, expressed in terms of the global warming potential of carbon dioxide.)

Now for the popcorn. There’s very little popcorn-specific environmental data, but the variety of corn commonly grown for popping is closely related to the corn used in cornmeal. So if we just use generic corn data, our estimates will be close enough.

According to researchers at the University of Massachusetts, cultivating an acre of corn generates approximately 1,700 pounds of greenhouse gas emissions. The average farm produces 155 bushels of corn per acre. Since a bushel of shelled corn weighs approximately 56 pounds, there are around 0.2 pounds of greenhouse gas equivalents embedded in a pound of corn by the time it leaves the farm gate. For most foods, transporting, processing and cooking account for slightly more than the amount of greenhouse gas emitted during cultivation and harvest. So let’s say a pound of popcorn — which is probably enough to trim a medium-size tree — would result in the production of just under a half-pound of carbon dioxide equivalents.

In other words, from an environmental perspective, there’s very little difference between trimming your tree with a pound of popcorn and using a strand of LED lights. That may seem surprising, since natural, farm-raised popcorn just feels greener than manufactured lights.

But details make a difference. Old-fashioned incandescent lights would be far, far worse for the environment: They use 10 times as much electricity as LEDs and don’t last nearly as long. You’ll also need to store your LEDs properly and turn them off when no one will see them anyway. Of course, if you have a few extra lights, you can’t eat the leftovers.

Around Christmas time, children may have visions of sugar plums dancing in their heads, but you can leave it to the Post's Brian Palmer to have apocalyptic visions of how our treasured holiday traditions are raping and pillaging the planet. 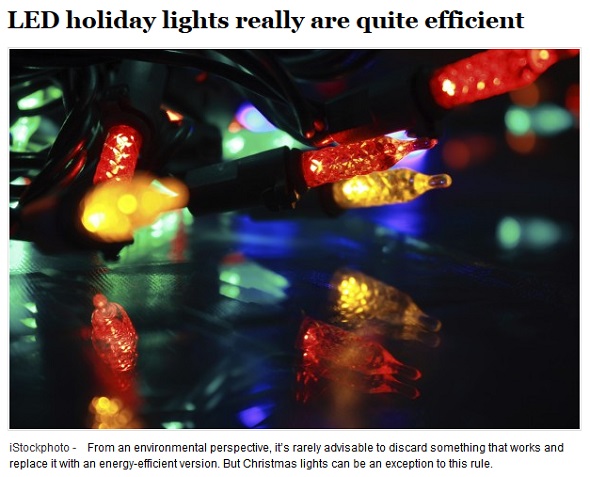