Pro-life sidewalk counseling outside of abortion clinics is "bullying" and should not not accorded First Amendment's "free speech" guarantees agreed the panelists on Thursday's edition of Now with Alex Wagner.

The panel in question was addressing the Supreme Court's decision to hear oral arguments in McCullen v. Coakley, a case which challenges a Massachusetts law which bars anyone but abortion clinic staffers from "enter[ing] or remain[ing] on a public way or sidewalk” that is within thirty-five feet of an entrance, exit, or driveway of an abortion clinic.  [Listen to the MP3 audio here; Watch the video and read the relevant transcript below the page break]

ALEX WAGNER, host: Ryan, one of the cases that the Supreme Court is going to be taking up is McCullen v. Coakley, which challenges a law forcing protesters to congregate more than 35 feet from the entrance to reproductive health care facilities.

This Supreme Court has struck down landmark legislation in the name of free speech. And I think a lot of people who are concerned about this sort of shame and humiliation and intimidation factor in and around the choice of abortion are worried that they will rule, quote/unquote, in favor of free speech and strike down these kind of limits that are in place.

RYAN GRIM, Huffington Post: Yeah, well, John Roberts more or less lied to Congress when he was going through the confirmation process when he was asked whether or not he respects precedent. And he said he very much does. He has then, you know, come to the Supreme Court and gutted every precedent he thought he could get away with gutting. So I think people who are worried that they'll overturn this have good reason to believe that he will.

KAREN FINNEY, host of MSNBC's Disrupt, NARAL board member: Remember, that the people who congregate outside of clinics have a sort of mob-like mentality. Their job is, again, to shame the woman, make it as hard as possible for her to get in there. So it's not about free speech, actually. It is about, you know, shaming and it is about making it harder to access something that is your legal right.

ILYSE HOGUE, NARAL Pro-Choice America President: And many of the young women that went to [Kermit] Gosnell cited the terrible protesters at the clinics down the block.

WAGNER: As the reason to not go there. Um, it's, sunlight is an important part of this battle. And shining a light and talking about the stuff that's happening at the state level and of course at the national level is incredibly important. The president of NARAL Pro-Choice America, Ilyse Hogue, thank you. And thank you to Jonathan [Capehart], Karen [Finney], and Ryan [Grimm]... 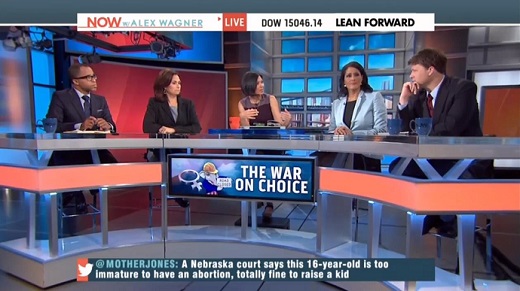 As you can see, the panel included two abortion-on-demand advocates -- NARAL Pro-Choice America's president Ilyse Hogue and NARAL board member Karen Finney -- but no pro-lifers or conservatives.

Before they discussed the forthcoming Supreme Court case, the panel praised Gov. Jerry Brown (D-Calif.) for signing into law a measure that expands the qualified medical personnel which can perform a surgical abortion and a Nebraska court case where a judge ruled a 16-year-old too immature to procure an abortion. The segment was titled, all-too-predictably, "The War on Choice."

Wagner and company seem fixated on the controversy in McCullen v. Coakley to be a clash of the right to access an abortion -- one read into the Constitution by the Supreme Court --  and the constitutionally-guaranteed right to free speech, with the former trumping the latter because the latter is politically unpopular in their political circle when it comes to pro-life advocacy outside of abortion clinics.

But completely left by the wayside is the right of women seeking an abortion to consider their options and listen to what pro-lifers have to say. Indeed, a group of such women has filed an amicus curiae (friend-of-the-court) brief to that effect, which you can find here and which I've excerpted a brief portion below (h/t SCOTUSblog):

Nona Ellington was convinced by Planned Parenthood employees to get an abortion because they believed she was too young to have a baby, and her “baby [was] just a blob of tissue.” She “never heard any other information about other options, fetal development, or the procedure itself.” Nona went through “many years in denial and emotional numbness without much regard for living.” For Nona, if someone would have “approached me to help me and give me valuable information as I was walking into the abortion clinic, I probably would not have had an abortion and suffered the horrible consequences for the rest of my life.” Nona regretted that she “never knew that abortion might not have been [her] best option.” For her, the manner of offering information would have made a crucial difference in her receptiveness, as she “would have ignored people yelling at me from a distance and would have only felt more shame.”

Paula Lucas-Langhoff ’s then-boyfriend forced her into an abortion by threatening her life, and holding her “captive, saying that I could not leave until I had an abortion.” The abortion clinic provided “misleading information about the abortion,” including that her “baby was only a blob of tissue.” She did not know that her “child was basically fully formed, had a heartbeat, and reacted to pain.” The night before her abortion, she “wandered the neighborhood looking for someone” to help her, to no avail. The next day, when she tried to back out of the abortion, her doctor “yelled at [her] and said that [she] was ‘wasting his time.’ ” She “would give anything to change the past,” and believes that she would have not had an abortion if she had met a pro -life counselor outside of the clinic. “My baby died because I was alone and had no one to help me.” However, at her time of greatest need, she insists that she would not have responded well to “someone that was 35 feet away from the clinic, shouting at me or using a bullhorn.”

Ten other women were represented in that brief, which concluded that:

The question, ultimately, is whether the First Amendment protects merely the right to cheer for one’s own team or whether it protects the right to a fair opportunity for persuasion through the free exchange of ideas. We respectfully ask this Court to re-affirm the latter protection.

Democrats for Life of America also filed an amicus brief, in which they concluded that:

All studies show that the decision to have an abortion is not one that is taken lightly or made without thoughtful consideration. The practical assistance that Petitioners provide to clinic patrons helps ensure that women make this decision with knowledge of all the resources and information available to them. The Act’s free-speech exclusion zone harms willing listeners by depriving them of the opportunity to speak with Petitioners and with others offering assistance.

The judgment of the court of appeals should be reversed.

Something tells me it will be a cold day in Hades before Alex Wagner brings on a representative from a pro-life Democratic group.