The liberal  Washington Post editorial board is no fan of recall elections. They opposed the effort to unseat Scott Walker and they similarly don't care much for the successful effort in Colorado this past Tuesday to recall two anti-gun Democratic state senators. Following both recall elections, the Post issued op-eds expressing their objection to recalls.

But this time around the editorial board was more adamant about the evils of the recall, insisting that "[s]tates should examine their laws with an eye toward heightening the barriers" to tossing elected officials out before their terms expire. "Recalls are rare, but their use is on the rise," the editorial board whined in their September 13 piece, "Government by recall." One culprit, the Post carped, was "nationalization of local issues, which prompts huge flows of outside money into state politics." 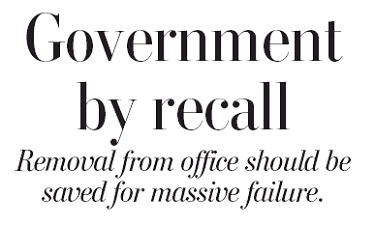 The logic breaks down in that restrictions on gun rights are not purely "local issues," as the 2nd Amendment's protections apply to citizens on the state as well as federal levels. The Post may have had a stronger case were the Colorado recall about say an unpopular new tax or some big-ticket spending item that frustrated fiscal conservatives. Those are purely local issues that don't tread on constitutional grounds. To paraphrase the late Martin Luther King, Jr., a threat to constitutional rights anywhere is a threat to constitutional rights everywhere.

By contrast in a print editorial headlined "Time to reorganize" which examined the lessons of the failed gubernatorial recall in Wisconsin on June 7, 2012, Post editorialists offered friendly advise to labor unions about how to move forward in a political climate that accepted, even demanded scaling back generous benefits packages for public sector union workers:

IN AN IDEAL world, there would have been no recall election in Wisconsin on Tuesday.

As many of those who voted for Gov. Scott Walker (R), the winner, apparently believed, it is destabilizing and unfair to make an official face an electoral do-over before his or her term ends. Mr. Walker took office only a year and a half ago and has not been credibly accused - much less convicted - of a major legal transgression. Divisive and politically motivated though it may have been, the curtailment of collective bargaining for public-sector unions that Mr. Walker and a GOP legislature enacted was well within their constitutional powers. Those who objected will have ample opportunity to hold their leaders accountable in 2014.

And Wisconsin never should have found itself in the fiscal predicament that gave Mr. Walker a reason - or an excuse, depending on your point of view - to confront the unions. Unfortunately, for many years prior to Mr. Walker's election in 2010, politicians of both parties approved unsustainable pay, pensions and health benefits for public employees, knowing that the full bill would not come due until long after they had left office.

Wisconsin is far from the only state whose politicians and government unions played such a game - certain jurisdictions in our own area come to mind - and the Badger State was not one of the worst offenders. The situation is especially dire in California and Illinois. But Wisconsin's structural budget deficit was bad enough to give Mr. Walker his opening, and he took it.

History will judge both the way he went about reining in the unions and the results he got. So far, his opponents' predictions of disaster have not materialized. The state has balanced its two-year budget without tax increases, and local school districts have used their new bargaining power to save money without layoffs or significant increases in class size. Higher tax revenue, the fruit of an improving national economy, have helped. But those who voted for Mr. Walker to show approval for his policies, and not just disapproval for the recall itself, had plausible reasons for doing so.

For public-employee unions, the lesson could not be clearer. Their instinct to punish Mr. Walker, so as to deter imitators, was understandable, but it led them down a blind alley. Public concern about the cost of state and local government is real, justified and spreading. Voters are not content with policy menus that include only service cuts and tax increases, without significant, permanent reductions in personnel costs that make up the lion's share of budgets. Even as Wisconsinites were voting for Mr. Walker, voters in two of California's biggest cities, San Diego and San Jose, were approving ballot measures to trim their public-employee pension burdens.

Public-employee union leaders are pledging to fight those new laws in court, just as their counterparts in Wisconsin and elsewhere are dismissing Mr. Walker's victory as the product of out-of-state campaign donations. They would do better to engage governments in a good-faith effort to restructure and preserve public services for the long term. States and localities face genuine financial problems, and the unions share responsibility for them.

You notice, by contrast, there was no grousing about  the torrents of out-of-state money and other resources devoted to deposing Gov. Walker nor about how "improvements in signature-gathering technology" encouraged the recall. The Post didn't run on with a lecture about how "America's system of government... is premised on the notion that voters entrust their representatives to act with deliberation and a degree of independence."

In their September 13 editorial, the Post insisted that although it favored "stricter gun restrictions" that they "would have found the latest recall drive ominous had these [Colorado] politicians voted against the gun-control law and it had been anti-firearms activists who had succeeded in booting them from office."

Yeah, sure, and I've got a ski resort to sell you outside of Denver.