Liberal constitutional law professor Adam Winkler took to the Daily Beast today to attack Supreme Court Justice Antonin Scalia as an "extremist" on the Second Amendment. Winkler -- who filed a friend-of-the-court brief in 2008 backing the District of Columbia's gun ban -- drew upon an AP news wire account regarding comments Scalia made at a recent Federalist Society event about the purpose for which the Second Amendment was proposed by Congress in 1789.

But an official with the Federalist Society who was in attendance at the speech says Winkler is all wet. First, the key charge Winkler leveled at Scalia (emphasis mine):

America has more than its fair share of extremists who believe people need to stock up on guns to fight against tyrannical government in Washington.Add one more to the list: Supreme Court Justice Antonin Scalia. In a speech in Montana on Monday, the jurist was asked about the Second Amendment and what arms were protected by that provision of the Constitution. That “remains to be determined,” he replied. As one example, he asked if people have a right to “bear shoulder-fired rocket launchers?” Perhaps they do, Scalia suggested. The answer would turn on the historical understanding of the Framers, who Scalia said included the Second Amendment in part to preserve the right of people to revolt against a tyrannical leader. 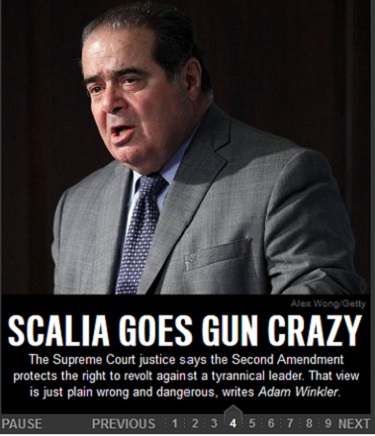 The idea that the Second Amendment gives people the right to revolt against government is broadly shared among gun rights extremists. And, indeed, the Framers were armed revolutionaries who understood that guns were useful for throwing off the yoke of tyranny. No doubt they believed that an armed citizenry would make it difficult for a tyrannical ruler to run roughshod over the people. But that’s not why they put the Second Amendment in the Constitution.

The Constitution was intended to be a charter of government, not a recipe for revolution. It was, as the legendary Chief Justice John Marshall said of the Constitution in 1819, “intended to endure for ages to come, and consequently, to be adapted to the various crises of human affairs.” The Framers thought the Constitution itself, with its division of powers, reliance on popular sovereignty, and judicial oversight, would prevent tyranny from ever arising. The Framers had the humility to recognize that this charter of government may prove flawed. Yet the mechanism for changing it was the amendment procedures of Article V, not a revolution through the Second Amendment. 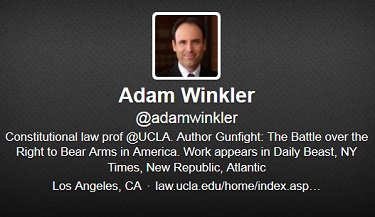 Of course, what we have here is a liberal constitutional law professor taking a pot shot at a conservative justice and suggesting that Scalia is some revolutionary whacko, not someone who prefers to see change result through peaceful constitutional processes. Anyone with even just a passing familiar with Scalia's judicial writings would say that's a patently unfair assessment of the jurist, who reveres the Constitution and the peaceful means it provides for amendment and improvement.

Reached for comment by email, Federalist Society executive vice president Leonard Leo, who was in attendance at the speech, objected to Winkler's take, saying he's woefully taking the justice out of context:

Scalia did not suggest that rocket launchers would pass muster. He was just using that to illustrate the point that how far the Second Amendment goes is what the Court will have to next confront.

He did make the point that some are distorting the Court's case law in the area. There are some saying that the Second Amendment provides the right to bear arms for self-defense only. He questioned whether that is how the Court has limited the scope of the Amendment, and then said one has to confront the reference to militias, which relates back to the concern about tyrannical governments and standing armies. It was a very measured response.

This is hardly the first time Winkler has caught the notice of NewsBusters. For our full archive on him, click here.