WashPost's Wagner Devotes 24 Grafs to Promoting Dem Gov. O'Malley's 'Plans for Rest of Term-- and Beyond'

"After an extraordinarily productive two years in which Maryland Gov. Martin O’Malley muscled through legislation on several top priorities — including same-sex marriage,gun control, transportation funding and repealing the death penalty — the question is: What, if anything, is there left for him to do before leaving office?"

That's how Washington Post staffer John Wagner opened his Metro section front-page April 22 story "O'Malley plans for rest of term -- and beyond." Nowhere in his 24-paragraph story did Wagner -- no stranger to NewsBusters criticism by the way -- cite any conservative or Republican critics of the liberal Democratic governor, a prospective 2016 presidential contender.

At no point did Wagner present the view that O'Malley's "productive" legislative session may be harmful for Marylanders, what with new laws increasing restrictions on gun rights, taking a bigger bite out of Marylanders wallets with higher taxes, and sticking Marylanders with a dubious offshore wind power project that benefits private companies and labor unions but may not be a good bargain for taxpayers. Instead, Wagner sounded like a giddy O'Malley booster eager for what's next on the governor's plate (emphasis mine): 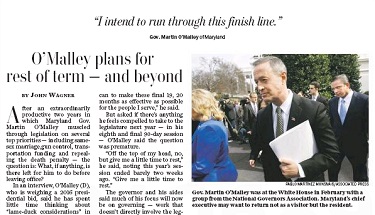 [A]sked if there’s anything he feels compelled to take to the legislature next year — in his eighth and final 90-day session — O’Malley said the question was premature.

The governor and his aides said much of his focus will now be on governing — work that doesn’t directly involve the legislature — including more direct engagement in StateStat, a program he pioneered that uses statistics to gauge the performance of state agencies. His implementation of a similar program while mayor of Baltimore was responsible for some of the first national attention O’Malley received.

Besides thinking about what’s best for Maryland, O’Malley said he will spend substantial time in coming months thinking more seriously about his future.

After looking briefly at what  O'Malley could do in terms of a 2016 presidential run, Wagner closed his article portraying the second-term governor as intent on working hard at his present job more than on seeking higher office (emphasis mine): 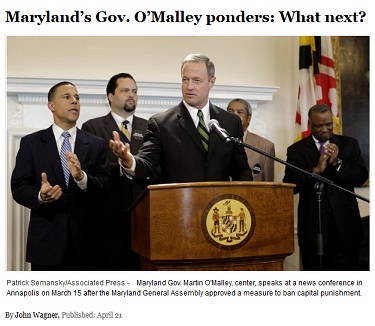 “A lot of the individual legislators are going to want to focus their energies on their agendas, not the governor’s,” said House Speaker Michael E. Busch (D-Anne Arundel), who helped shepherd O’Malley’s legislative agenda through his chamber this year. “The governor is smart enough to understand that. . . . Will his last year be as packed with issues and drama as this year? No, probably not.”

That still leaves plenty to do, O’Malley and his aides say.

The governor, who left Saturday on a trade mission to Israel and Jordan, said job creation will remain a priority.

He also remains focused on reaching 16 wide-ranging strategic goals he has laid out for his administration. They are as varied as increasing mass transit ridership, eliminating childhood hunger and increasing renewable energy generation.

An aide said there also are plans for a series of visits to communities around the state to seek input on how state government can better serve them.

And during the interview, O’Malley mentioned a number of lower-profile initiatives that will get his attention, including plans for a “town hall” for science teachers to coordinate strategies on teaching and projects related to the Chesapeake Bay watershed.

Much of his work, he said, takes place outside the 90 days law­makers are in town.

“The other three-quarters of the year is driving down violent crime, driving up student achievement, building an innovation economy through all the various things our state government and its executive branches do,” O’Malley said.

With copy like that, the reader may be forgiven for thinking that Wagner is more interested in a job in O'Malley's PR shop, not with working hard to be the objective, balanced political journalist that Post readers expect him to be.