Maersk Alabama Captain: Provide Military Escorts and Arm (Some) of the Civilian Crews 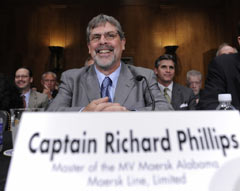 It's bound to be mostly lost in the mainstream media thanks to swine flu and the Obama 100 days hype, but Richard Phillips testified before the Senate Foreign Relations Committee today. In doing so, the captain of the MV Maersk Alabama called on lawmakers to open the way for at least some merchant sailors to be armed as part of a comprehensive anti-piracy policy that includes more military escorts.

The Chicago Tribune's Mark Silva has the story in an April 30 post in that paper's "The Swamp" blog. Silva reports that Phillips has a moderate stance on arming civilian crews -- he wants only the four most senior ranking officers aboard a given ship armed -- and that Phillips hopes for a greater U.S. Navy presence in escorting and protecting U.S. merchant vessels (emphases mine):

"First, I believe it is the responsibility of our government to protect the United States, including U.S.-flag vessels that are by definition an extension of the United States, their U.S. citizen crews, and our nation's worldwide commercial assets.

"So, it follows then that the most desirable and appropriate solution to piracy is for the United States government to provide protection, through military escorts and/or military detachments aboard U.S. vessels. That said, I am well aware that some will argue that there is a limit to any government's resources - even America's.

" In fact, due to the vastness of the area to be covered - and the areas of threat are continually growing larger - our Navy and the coalition of other navies currently positioned in the Gulf of Aden region may simply not have the resources to provide all the protection necessary to prevent and stop the attacks...

"In my opinion, the targets - the vessels - can be "hardened" even beyond what's being done today and made even more structurally resistant to pirates.

"In addition, more can be done in terms of developing specific anti-piracy procedures, tools and training for American crews. I do however want to emphasize that contrary to some reports that I've heard recently, American mariners are highly trained and do receive up-to-date training and upgrading...

"I believe that discussions are underway now between the industry and government on the details of specific proposals to harden the vessels (the specifics of which should remain secret) and I am confident that we will soon have additional methods for protecting vessel and crew. And while they will be an improvement, there is no way they can be foolproof.

"I've also heard the suggestion that all we have to do to counter piracy is "just arm the crews". In my opinion, arming the crew cannot and should not be viewed as the best or ultimate solution to the problem. At most, arming the crew should be only one component of a comprehensive plan and approach to combat piracy.

"To the extent we go forward in this direction, it would be my personal preference that only the four most senior ranking officers aboard the vessel have access to effective weaponry and that these individuals receive special training on a regular basis.

"I realize that even this limited approach to arming the crew opens up a very thorny set of issues. I'll let others sort out the legal and liability issues but we all must understand that having weapons on board merchant ships fundamentally changes the model of commercial shipping and we must be very cautious about how it is done.

"Nevertheless, I do believe that arming the crew, as part of an overall strategy, could provide an effective deterrent under certain circumstances and I believe that a measured capability in this respect should be part of the overall debate about how to defend ourselves against criminals on the sea.