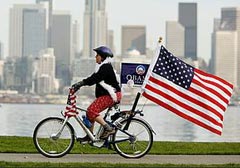 The November 6 article by Andrea James and Kery Murakami found "poignant significance" for liberal Seattleites in the Obama victory who can proclaim that "[t]his is their America, too.":

The feeling was evident in jubilant partying in the streets, in quiet moments of reflection and in blossoms of red, white and blue.

With newfound patriotism, Seattleites want to wave the flag, hang it from their homes and stick it on their cars.

"The thing that's kind of astounding to me is I never ever would have cared to own a flag," said Rosemary Garner, 42. "This is the first day in my life I actually feel this funny sense of pride about my country. It's a very foreign feeling, but it's a good one."

Garner, a self-described "flag virgin" who lives on Capitol Hill, bought eight flags Wednesday -- some to wave and others to stick on her car to "mix and match with some nice Obama and peace signs. Then I bought a couple of flags for some friends who wanted to hang them from their truck along with their biodiesel stickers."

At All the King's Flags in Ballard, people have been snatching up American flags.

"Just today I've had a noticeable rush on U.S. flags," said James Sawyer, assistant manager. "I had a lady come in and she said she's happy to be an American again, that's why she was buying a flag."

Of a dozen customers, one had supported McCain and worried about rising taxes, but everyone else was upbeat, manager Alex White said.

While flag waving is normal in some parts of the country, the Stars and Stripes haven't been so ubiquitous in Seattle.

"People around here don't fly flags like they do on the East Coast," said Seattle flag maker Carol Anderson, who hails from Rhode Island but has lived in Seattle for seven years.

"I don't care whether it's the Fourth of July or whatever. This country's at war. You'd think that you'd see a few American flags flying. Were they not flying the flag because they don't like George Bush? I mean, give me a break. It should represent more than who's in office. The flag itself to me has always represented an honor."

A New England upbringing has led Briggs Hause, a cashier at Magnolia Ace Hardware, to frequently fly the flag. But she disliked President Bush's leadership so much that she couldn't.

"I haven't the last eight years because I was very depressed with it," said Hause, who gave her age as "in my 60s." "It wasn't my America. I didn't put out one (a flag). Refused to. But now I will."