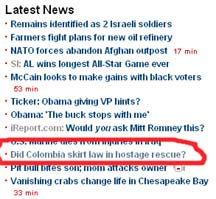 Leave it to CNN to worry that the Colombian government committed a war crime in its recent rescue of FARC hostages, including former presidential candidate Ingrid Betancourt.

This morning in the Latest News menu on CNN.com, I found this teaser headline (shown in screen capture at right): "Did Colombia skirt law in hostage rescue?"

That clever ploy could constitute a big no-no under the Geneva Conventions, Penhaul insisted, citing an international law expert:

BOGOTA, Colombia (CNN) -- Colombian military intelligence used the Red Cross emblem in a rescue operation in which leftist guerrillas were duped into handing over 15 hostages, according to unpublished photographs and video viewed by CNN.

Photographs of the Colombian military intelligence-led team that spearheaded the rescue, shown to CNN by a confidential military source, show one man wearing a bib with the Red Cross symbol. The military source said the three photos were taken moments before the mission took off to persuade the Revolutionary Armed Forces of Colombia rebels to release the hostages to a supposed international aid group for transport to another rebel area.

Such a use of the Red Cross emblem could constitute a "war crime" under the Geneva Conventions and international humanitarian law and could endanger humanitarian workers in the future, according to international legal expert Mark Ellis, executive director of the International Bar Association.

"If you use the emblem in a deceitful way, generally the conventions say it would be a breach. [Based on the information as explained to me,] the way that the images show the Red Cross emblem being used could be distinguished as a war crime, " he added.

Penhaul then noted that CNN did not buy the material their confidential source wished to sell, and hence was unable to independently verify the allegation.

Yet even if the allegation is true, so what? The hostages rescued were, well, civilian hostages, held for years by FARC, a narco-terrorist outfit that has plagued Colombia for years. Even if the letter of Geneva was violated, how does it violate the spirit of the international conventions?

Hostages were rescued without a shot being fired. Turning a successful, bloodless rescue operation into an occasion to criticize the Colombian government of a "war crime" is sensationalistic at best and encouraging to terrorist sympathizers at worst.

Update (17:05 EDT): Colombia President Alvaro Uribe conceded that one soldier involved in the hostage rescue slapped on a Red Cross insignia during the operation out of fear for his life. Bloomberg has the story:

July 16 (Bloomberg) -- Colombian President Alvaro Uribe apologized to the Red Cross after a soldier used the agency's emblem when he was pretending to be an aid worker earlier this month during the rescue of 15 hostages held by guerrillas.

Uribe said the soldier attached the insignia to his jacket because he feared for his life. The soldier saw a great number of Revolutionary Armed Forces of Colombia fighters as he climbed down from the unmarked helicopter, Uribe said.

Government troops on July 2 rescued Ingrid Betancourt, three U.S. Defense Department contractors and 11 military personnel by tricking two commanders of the FARC, as the drug-funded group is known, into believing an international aid mission had been sent by the guerrillas' leadership to retrieve the captives.