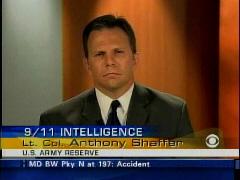 Yesterday MRC's Rich Noyes posted to Newsbusters and issued a Media Reality Check regarding the broadcast media ignoring the Able Danger story. Today, the Early Show's Hannah Storm interviewed Anthony Shaffer, the Army officer at the heart of the story, which centers on al Qaeda intelligence that he claims military lawyers did not allow him to forward to the FBI during Clinton's administration, as well as the 9/11 commission leaving this fact out of its final report. In an otherwise good interview, however, Storm failed to mention 9/11 commissioner and former Clinton Justice Department official Jamie Gorelick's culpability in writing the controversial "wall" memo which enforced a strict separation of intelligence sharing between the military or CIA and the FBI, as CNSNews.com's Scott Wheeler reported in April 2004:

(CNSNews.com) - One of America's most prominent federal prosecutors sought changes to the 1995 "wall" memo authored by then-Deputy Attorney General Jamie Gorelick, but most of the concerns expressed by U.S. Attorney Mary Jo White over the barriers erected between criminal and counter-intelligence investigations were rejected.

Gorelick's "wall" memo was the subject of an April 26 CNSNews.com report, which quoted four sources as saying the memo erected barriers to intelligence-sharing between the FBI and intelligence agencies -- and impeded the investigation of alleged Chinese espionage and illegal campaign donations to President Bill Clinton's 1996 re-election campaign.

During the interview Shaffer himself didn't raise Gorelick as an obstacle, and he refused to name names or cast blame, insisting only that he agrees with Congressman Curt Weldon (R-PA), that a congressional investigation is in order, but certainly Storm, or at least Early Show producers, must have some recollection of Gorelick's role in the "wall" memo, being widely reported as it was last year during the Commission's final months of public hearings.


Below are the questions posed by Storm:

Hannah Storm: "As we said, there are new allegations of missed opportunities to prevent the 9/11 attacks. An Army intelligence officer claims that a year before the attacks, his top secret team had identified an al Qaeda cell operating in the United States that included 9/11 ringleader Mohammed Atta. He says that military lawyers stopped him from sharing that information with the FBI. And this morning, Lieutenant Colonel Anthony Shaffer is going public with his story. Good morning, sir.

### Storm: "You were a member of this highly classified military intelligence team known as Able Danger. You identified four of the 9/11 hijackers, including Atta. How much of a threat did you think he and his cell were at the time?"

### Storm: "And when you tried to set up, as I understand it, three meetings with the FBI to share this information about the cell, those meetings were blocked by government lawyers. Why?"

###Storm: "And you had no other recourse, no other way to get this information to the FBI. What was that like?"

###Storm: "I want to get to some comments by the leaders of the September 11th Commission, they said that Able Danger, your unit there, did not turn out to be historically significant. They also said that none of the documents that they requested about Able Danger that were turned over by the Defense Department referred to Mister Atta or any of the other hijackers. I mean, is it possible that the Defense Department did not turn over all the documentation?"

###Storm: "You could be putting your career in serious danger here by coming forward with these allegations. Why now? Why do this?"

###Storm: "What's the bottom line? Who dropped the ball here?"