While most Americans celebrated Independence Day with fireworks and barbeques, Barbara Walters spent the occasion dining with Syrian leader Bashar al-Assad, whom Walters described as "intelligent" and "charming" who wants "very much to have good relations with us." Perhaps realizing her own gushiness about Assad Walters pre-empted accusations and denied she is "brainwashed." [audio available here]

The veteran journalist began by noting Syria remains on the State Departments terrorism list because "they are against the war in Iraq." While she did note Syria’s support for Hamas and Hezbollah, she described them simply as "two groups that we consider unfriendly in Israel." She did not note the many suicide bombings targeting innocent civilians those groups support. 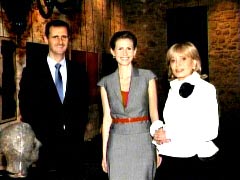 "Although the Constitution requires that the president be a Muslim, there is no state religion in Syria, and freedom of worship is generally respected. However, all nonworship meetings of religious groups require permits, and religious fundraising is closely scrutinized. The Alawite minority dominates the officer corps of the military and security forces. The government tightly monitors mosques and controls appointment of Muslim clergy."

Walters added, Syria is "considered a dictatorship." Just "considered?" Freedom House also rated Syria as "not free" with a "downward trend arrow due to the authorities’ suppression of opposition activities." While conceding she is "not saying this is...a perfect place," Walters advocated more dialogue with the totalitarian regime.

Although Walters claimed she went on this trip on her own, without the direction of ABC, it is not unprecedented for ABC News to demonstrate sympathy for Bashir al-Assad. "Good Morning America’s" Diane Sawyer pressed Assad on his favorite movies.

The transcript, minus some irrelevant portions of Barbara Walters visiting Damascus’ ancient ruins, is below.

BARBARA WALTERS: Doesn’t everybody when they have a vacation go to Syria?

GOLDBERG: Absolutely. Now, you know, we-

WALTERS: Some people go to the Hamptons. Some people, you know, take a vacation in North-

JOY BEHAR: How are Syrians to Jewish Americans these days?

WALTERS: Okay, well let me- Syria is, is an amazing country. It is not at all what I expected.

ELISABETH HASSELBECK: Did you think, did you have apprehension before you left?

WALTERS: Everybody said to me "are you going to be afraid?" "Will you walk the streets?" I’ve never felt safer.

SHEPHERD: You had a body guard?

GOLDBERG: So where does this misconception come from that Syria’s an issue?

WALTERS: Well, first of all the country is on our terrorist list. They are against the war in Iraq, the president of Syria, who’s name is Bashir al-Assad. I’ll tell you more about him in a minute. They objected to the war in Iraq. And they are neighbors and friends of Iran. The enemy of my enemy is my enemy or whatever- the friend of my enemy is my enemy. And they are friendly with both Hamas and Hezbollah who are two groups that we consider unfriendly groups in Israel. So in other words, they have friends who are not friends of ours. They have also been accused of allowing people and terrorists to cross the border into Iraq. They say they do not do that and they haven’t and they’ve really cut down on it. They have a million and a quarter Iraqi refugees in their country whom they have to take care of. Okay, that’s the political. They want very much to have good relations with us. Let me just, before I talk about the country because I just mentioned them, show you the young president and a picture of them because we had a very long lunch together. Now-

GOLDBERG: They look like they should be in the Hamptons.

WALTERS: Let me tell you, he, Assad, was the- his father- was for many many years the dominant ruler in, in Syria. Henry Kissinger used to go over and negotiate. This is his son Bashir Assad. People said, "oh he’s just a puppet." From my experience, he was a very intelligent, a well informed, thoughtful, he spoke perfect English, wants very much to have relations with this country, has some solutions for ending the war in Iraq. She was educated in England, worked in this country, speaks English the way I’m talking to you, lovely, intelligent. I don’t want you to say- people say "oh you’re brainwashed." But that was not it. They just were very charming and intelligent. She has a cooperative, a group teaching children to be entrepreneurs with Harvard University, was raised in England, worked in this country. So this is not what we expected in terms of the leaders.

WALTERS: They have total freedom of religion because it’s a Christian, Muslim, there are not very many Jews there. Remember, they had the whole situation with the Golan Heights, which I visited, which is a section occupied now by Israel, which the Syrians want back and there are discussions now to try to get it back. Look, there are still things, it is considered a dictatorship, we still do not know what they’re relationship is with Iran, there are other problems I’m not saying that this is, you know the perfect place. What I am saying is we need to know more about it and more about its leaders and have more conversation.

WALTERS: Okay, so I’ll just tell you real quickly how it happened. I had dinner one night with the Iranian ambassador to the United Nations. Most of the ambassadors to the United Nations, I think they all sort of see each other. They don’t move around. This is a very impressive man, invited me to dinner one night, and then, and with a charming wife, fine, and then said- that’s neither here nor there- and then said "would you like to come to Syria?" I’ve been there once before to meet Mrs. Assad. I had been there several years ago. And he said they would be very happy to meet with you if you wanted to meet with them. So on my own, this had nothing to do with ABC, I went with a friend and thought "you know what? It’s either South Hampton or Damascus." South Hampton, Damascus, South Hampton, Damascus.

GOLDBERG: And it’s with the same people.

WALTERS: I left my headline for the end, which is "The View" is seen everyday in Syria. Everyone knew us!

WALTERS: But I do want to say before they say "oh yeah she goes over and she meets the president." We have problems. We do not like the fact that they support Hamas and Hezbollah. Without giving you a history lesson, these are organizations that want the destruction of Israel. They are friends with Iran and Ahmadinejad. This is a man who wants the destruction and have Israel erased. Their feeling is-

WALTERS: Ahmadinejad does. They’re feeling is these are our neighbors, you have to have relations, et cetera. They lost the war in 1948.

BEHAR: They are for diplomacy, which is what Barack Obama’s preaching.

WALTERS: Yes, they are for diplomacy.

Screencap of photo of Walters with Assad, as shown on the July 7 edition of ABC's "The View."