Anti-male sexism once again became a topic on the March 11 edition of "The View." Discussing New York Governor Eliot Spitzer’s prostitution scandal, Joy Behar, who called men "idiots" who "think with Mr. Happy," shouted "I am sick of men and their sexual proclivities." Sherri Shepherd quickly responded "don’t put it on men." Elisabeth Hasselbeck noted the prostitute was a woman and "there are two people to blame there, two people that tangoed here." Later in the conversation Behar claimed "I don’t hate men. I hate politicians."

Behar also added "it seems as though power and sex go together with men." She also said she "would like to see a scandal where a woman is getting great sex." Whoopi Goldberg then inquired what kind of reaction would ensue if a female politician was caught with a male prostitute. Behar theorized that "they’d burn her at the stake."

The relevant portions of the conversation are below.

JOY BEHAR: Aren’t you sick of men? I mean- [applause] I am sick of men and their sexual proclivities.

SHERRI SHEPHERD: No! Don’t put it on men. 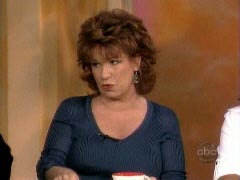 BEHAR: Viagra is destroying our government. [laughter] It must be stopped. And it’s not a coincidence that it’s called the Mann Act when you take a hooker from one state to another.

HASSELBECK: Excuse me, but that hooker was a woman, so there are two people to blame there, two people that tangoed there. So I don’t think it’s about a man or a woman.

WALTERS: Whether you hate men, or don’t hate men-

BEHAR: It seems as though power and sex go together with men.

HASSELBECK: Well, it depends if-

BEHAR: I would like to see a scandal where a woman is getting great sex. Where do we see that? You never see that.

WALTERS: But you don’t have women who rape, and you know, the sexes, however we were created, the sexes are clearly different.

GOLDBERG: I’m sorry, how would we be if it was a woman governor or congressperson who got caught soliciting a guy hooker? Would that-

BEHAR: Oh my God, they’d burn her at the stake.