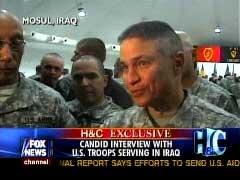 The bravest and most patriotic of Americans, those who see first hand what goes on in Iraq, can see the liberal bias in the media. On Monday’s Hannity and Colmes, co-host Sean Hannity recounted from his recent trip to Iraq that many in uniform there feel the media paints a grimmer picture than the reality on the ground. Hannity first offered this comment when talking with Oliver North reporting from Ramadi, Iraq.

Sean Hannity: "You know Colonel, one of the things without fail, wherever the secretary went, he was greeted like a rock star. I mean, the troops love him. And the one theme that kept coming back to me, and they watched TV regularly, they’ve had Fox News on almost everywhere I went, is that the media was not portraying this accurately, and they did mentioned, quite often, the disdain and the disgust at the portrayal of, of their efforts and the politics that’s going on behind here in America. I assume that, this now your eighth trip to Iraq, you’re hearing a lot of the same thing."

Later in the show, Hannity played his taped discussions with U.S. troops in Mosul. There, one soldier spoke up on the media portrayal of the situation in Iraq.

U.S. Soldier: "The bottom line is that from we hear what is being said in the media back home, but we’re here and we see a totally different side of what’s happening."

Hannity: "Explain that. What’s the difference between what people hear at home and what’s happening here?"

U.S. Soldier: "A good example: This past Tuesday we went out to the city to deliver school supplies to children."

Hannity: "And we’re in Mosul just so people know.

U.S. Soldier: "And the Iraqi Army actually provided our security for us. We didn’t have any problems. The locals, they were, you know, they were a little bit shy and nervous but, you know, absolutely -"

Hannity: "So that sort of transition is happening successfully."