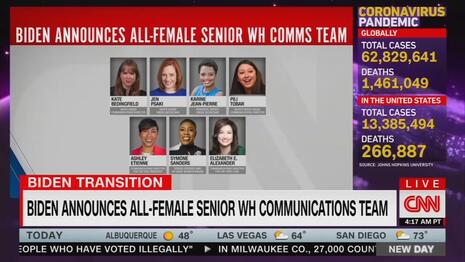 In the midst of their constant praise for President-Elect Joe Biden and his picks for cabinet positions and senior officials, leftist CNN once again ignored the credentials of the nominees. On Monday morning’s New Day, co-hosts John Berman and Alisyn Camerota praised the "historic" nature of an all-female White House communication’s team. This ignored their past partisan hackery and the fact that several of Biden’s picks previously worked for CNN and other networks.

Rather than having a substantive discussion, Camerota proceeded to ignore her own advice: “…It's an historic headline and a very important historic headline, but I think that sometimes eclipses their qualifications for the job.”

There was no mention of how Jen Psaki and Symone Sanders used to be CNN contributors, Anderson Cooper even bemoaned the fact that they lost a contributor when Psaki joined the administration. The only time the qualifications for Biden’s communication were mentioned was when Brittany Shepherd, a reporter with Yahoo News, remarked: “It's critical for the Biden transition team that they are putting adults in the room. That's why you're seeing a lot of Obama-world veterans, both formally and informally in Jen Psaki and others.”

This partisan claim is just as laughable now, as when the leftist-aligned network gushed over Obama's White House staff. It is based on the DNC-approved premise that Donald Trump broke the system and that Joe Biden needs to come in and fix it.

These facts did not stop Berman from proclaiming: “It's a big job and they have a lot of work to do. Not just to restore confidence in an administration or a government, but in institutions themselves. Because Americans have lost faith in institutions. And that's a tall order to try to restore that in just a few years.”

To CNN’s credit, they briefly touched on the criticism of Biden’s pick for the Office of Management and Budget Neera Tanden, but they do not get full credit, since they were too busy worrying that she was not left-wing enough: “…a former spokesperson for Bernie Sanders saying, everything toxic about the corporate Democratic party is embodied in Neera Tanden.”

Rather than do the job of honestly reporting the news and credentials of future leaders of the government, CNN abandons its principles to gush over any decision by Joe Biden. Whether it is ignoring policies and past positions, or ignoring the revolving door between Democratic administrations and the media, it is not likely that this trend will change.

This CNN bias was sponsored by Fidelity and Liberty Mutual. Click on the links to let them know what you think.

A transcript of the November 30th Coverage is included below:

ALISYN CAMEROTA: President-Elect Joe Biden and Vice President-Elect Kamala Harris will receive their first national security briefing today. Biden will also formally announce his economic team today after naming an all-female senior communications team last night. Joining us now to talk about this, we have CNN political analyst, Seung Min Kim, a White House reporter for "The Washington Post." Also with us, Brittany Shepard, national politics recorder for Yahoo! News. Great to see both of you. Let me just put up the list of the women who will be leading the communications team in the Biden White House. And, you know, Brittany, I don't want -- yes, it's an historic headline and a very important historic headline, but I think that sometimes eclipses their qualifications for the job. These women will be familiar to lots of our viewers. They've been around Washington. They've been in and out of the White House. They know what they're doing. But as you point out, it's very notable, because Washington is the ultimate old boy's club.

BRITTANY SHEPHERD [National Politics Reporter, Yahoo News]: Exactly, Alisyn. I mean, D.C. Is the city of boy's clubs. I think the White House is probably the most notorious of them all. Both in the press representation and in the staffing. It's critical for the Biden transition team that they are putting adults in the room. That's why you're seeing a lot of Obama-world veterans, both formally and informally in Jen Psaki and others, Symone Sanders, as well, from the Bernie campaign and the Biden campaign. It's critical to them that the voice coming out of the White House representing Joe Biden is not only fierce in loyal defense of him, but also fresh. The campaign and now the transition has made pains to ensure that their transition team is diverse in thought, in experience, in age, and that's continuing over here to the communications team. And I think it's notable that over the last four years, we have had a maybe acrimonious relationship, to put it politely, we what what's coming out of the White House press shop, but we did hear a lot from President Trump himself. He would be out on the lawn speaking for sometimes an hour and a half if it's snowing, if it's 100 degrees. With a group of adults like the Biden campaign has liked to create, I don't think we're going to hear from Biden as much. I think we'll be hearing a lot from these women and we should really be getting familiar with their names, because Biden will take a quieter role. These women, especially Jen Psaki and Kate Beddingfield will be taking a much more public role.

JOHN BERMAN: It's a big job and they have a lot of work to do. Not just to restore confidence in an administration or a government, but in institutions themselves. Because Americans have lost faith in institutions. And that's a tall order to try to restore that in just a few years. Sung-Min, we're also getting reporting on the economic team that Biden will nominate. We knew Janet Yellen as Treasury Secretary. And overnight, we learned Cecelia Rouse, to lead the Council of Economic Advisers, she is a labor economist at Princeton. And Neera Tanden to run the Office of Management and Budget, which is a Senate confirmed role. Why does that matter? Because there's already griping overnight about that nomination. A spokesperson for Senator John Cornyn has put out a statement basically saying something to the effect of, there's a 0% chance that she will be confirmed. And then, also, a former spokesperson for Bernie Sanders saying, everything toxic about the corporate Democratic party is embodied in Neera Tanden. Interesting that this is the pick all of a sudden after a few weeks that's generated the controversy. What's going on here?

SEUNG MIN KIM [CNN Political Analyst]: Well, Neera Tanden has been a prominent figure in Democratic politics for a very long time. Obviously, she is in her role as the leader of a very prominent liberal think tank, the Center for American Progress. She was an ardent Hillary Clinton ally in 2016, which put her up against a lot of Bernie Sanders supporters, like the one you just quoted there had and there are a lot of comments that both the left and right may dig through of Neera Tanden that may surface at her confirmation hearing. I know Republican operatives were going through her feeds and screen-shotting some of her more colorful tweets. So that could certainly arise. And also just the dynamics could be interesting. We just talked about her clash with some Bernie supporters. Bernie Sanders is the top Democrat, either Chairman or Ranking member, on the Senate budget committee, so he will be helping to lead the confirmation hearings, perhaps in a role to lead her defense against Republicans. But I do think this is why those Georgia runoffs on January 5th really have so many high stakes for the execution of Joe Biden's agenda, whether it is personnel or policy. And we're seeing it play out right now. I think it is a pretty fair, it is a fair analysis to say that if there is a Republican-controlled Senate, Neera Tanden is probably not going to get confirmed. But certainly, if it's one controlled by Democrats, or one where Kamala Harris has the tie-breaking vote, she could be muscled through.

CAMEROTA: Do you have anything you want to add to that, Brittany?

SHEPHERD: I think it's important to note, too, I think a lot of Progressives feel a bit blindsided by what's been happening with some of these transition picks, and Neera Tanden, like Seung-Min was saying, is kind of a really bold example of that. They feel like even as the Biden campaign and the Biden transition is trying to tack left, they're still tacking left in the wrong direction for them. That's why you hear folks like Bernie people have frustration. And I think you'll hear that get louder as Republicans get more and more critical of Neera Tanden, too, which I really feel like is very fascinating.