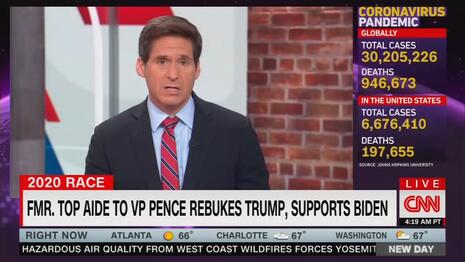 He also touted Olivia Troye, who was the former National Security Advisor for Vice-President Mike Pence, who recently went on record attacking the President’s reaction and performance on combating the coronavirus pandemic this year. Reporter Boris Sanchez trumpeted Troye: “Now she's endorsing Joe Biden, because she says President Trump has hindered the United States response to the pandemic. She believes the President is more concerned about re-election than saving American lives.”

Troye claims that the President took a cavalier approach to the coronavirus pandemic: “His biggest concern is that we were in an election year and how is this going to affect what he considered to be his record of success?”
Berman tried comedy, needling: “The administration blames so many disgruntled former employees. It would be hard to find a 'gruntled' former employee at this point.”

These staffers constantly speaking out are obviously part of the media's effort to help Democrats, just over two months before the election. As Kyle Drennen pointed out on August 18, Taylor flat-out explained that this was a coordinated effort: “I’m going to tell you this, the President hasn’t heard the last of us. In fact, me speaking out yesterday, you could think of it as an opening salvo.”

CNN neglected to report on the response of the administration to Ms. Troye’s exit. But President Trump gave a brief interview Thursday afternoon where he claimed that the former aide was fired from her position and later gave a “beautiful letter” praising the administration before she left.

Vice President Pence commented that “it reads to me like one more disgruntled employee that has decided to play politics during an election year.” None of these comments were noted by the New Day hosts.
Berman and Sanchez found more interest in attacking the President than accurately and thoroughly reporting on the story.

This anti-Trump propaganda was sponsored by Carvana and IHOP. Click on the links to let them know what you think.

A transcript of the September 18 coverage is included below:

JOHN BERMAN: Meanwhile, a new former Trump administration official has come forward to say she is voting for Joe Biden. Olivia Troye was Vice President Mike Pence's top aide on the coronavirus task force. She's blasting the administration's pandemic response in a searing new video. CNN's Boris Sanchez live at the white house with the latest on this. Boris, I think it needs to be said, I don't think there is any precedent for the sheer number of people who have left the administration and then said they are going to vote against the leader of that administration.

BORIS SANCHEZ [White House Correspondent]: Yeah, that's right, John. And the President just dismisses them as disgruntled former employees. More on that in a second. As you noted, Olivia Troy was Vice President Pence's former homeland security adviser. She was on the coronavirus task force until earlier this summer. Now she's endorsing Joe Biden, because she says President Trump has hindered the United States response to the pandemic. She believes the President is more concerned about re-election than saving American lives. Here's more from Olivia Troy.

OLIVIA TROY [Former Top Aide to VP Pence]: Towards the middle of February, we knew it wasn't a matter of if covid would become a big pandemic here in the United States, it was a matter of when. But the President didn't want to hear that, because his biggest concern is that we were in an election year and how is this going to affect what he considered to be his record of success? It was shocking to see the President saying that the virus was a hoax, saying that everything's okay, when we know that it's not. The truth is, he doesn't actually care about anyone else but himself.

SANCHEZ: Troy also shared an interesting anecdote during a meeting. The President being told that he shouldn't be shaking hands with people and he was apparently relieved. He'd told the room, quote, I don't like shaking hands. I don't have to shake hands with these disgusting people. The White House, President Trump, Vice President Pence all trying to discredit Troy at this point. The President last night saying that 99% of the people who leave the administration and criticize him are lower-level people, essentially nobodies, who are then encouraged to go after him. Of course, John, we know that's not the case. There are plenty of high-profile names at the highest level of government who have served in this administration that have come out and criticized this president. People like James Mattis, John Bolton, John Kelly, Anthony Scaramucci, the list goes on and on. John?

BERMAN: And to be clear, Olivia Troy, who was working in the administration a few weeks ago, now says she will vote for Joe Biden. Joining me now is another former administration official who now says he is voting for Joe Biden. Miles Taylor, he is now a CNN contributor.  Miles, you know Olivia Troy well. You recommended Olivia Troy from the department of homeland security to work for Mike pence and in the coronavirus task force. She was in the room where it happens. Weeks ago, she was in the room where it happens. So what does it tell you that she is now coming out saying she was deeply disturbed, so distrubed that she was going to vote for Joe Biden?

MILES TAYLOR [Former Chief of Staff at the Department of Homeland Security]: Thanks for having me, John. Like you said, I know Olivia Troy, I served with Olivia Troy and I can tell you what she's not. And she's not a liar and she's not a political hack. And I can tell you what she is. She's a patriot, an honest civil servant, and someone who had a front row seat to this white house and the president and the vice president's decision making. I think, look, there's no other way to cut it. This is damning for the White House. The white house keeps saying that there are anonymous sources who are saying false things about the President and that it's not true and if you only really saw the President in action, you would be so impressed with his leadership and his abilities. Look, Olivia Troy was one of those people, like you say, who was in the room where it happened and she is providing that firsthand testimonial that Donald Trump, on the most important national security issue of his entire presidency was totally, totally checked out, to the extent that he was more focused on his re-election than he was on saving American lives. I think the White House is panicking here, John. And you can see it in their response. They've trotted out the Vice President's national security adviser and the Vice President himself to denigrate Olivia Troy. And I'll tell you this, John. Both of those individuals, vice president pence and Keith Kellogg, his national security adviser, have personally thanked me for referring Olivia Troy to their office and said she was doing an incredible job as his homeland security adviser. But this is par for the course for this White House. They like someone until that person criticizes them and then barely pretend to have known the person and say that was just a back-bench staffer who had no impact. That's not who Olivia Troy was. She was a central player.

BERMAN: It needs to be said that I can't recall a time where you have so many people who weeks or months ago worked in the administration and have now come out and said before an election, they will not vote for the man on top of that administration. Why is it happening here?

TAYLOR: Well, John, I think it's a simple answer. And that is that people are so affected by what they saw in Donald Trump's White House that they feel they have no other choice but to risk their careers and their reputations and their personal lives to come out there and actually say what happened in this administration. Right now, America is trying to decide whether to retire or rehire Donald Trump. And these people feel like it's important to come out and say the truth. Just yesterday, our organization repair, which Olivia just joined, also announced another former Trump administration senior official that joined our ranks, Josh Venable, who was the chief of staff to Betsey Devos at the Department of Education. And we'll have others. Olivia Troy, you need to think of her as a domino that will start a chain reaction of more people to having the courage to speak up about this president and presidency, and the direction of the country and some of the damage that's been done by Donald Trump and why we need to repair it. So I think this is just the beginning. I'm hopeful that you're going see more focus at a senior level coming out and talking about this. But again, Olivia Troy just the beginning and hopefully more people will have the courage to speak up.