On Sunday’s Reliable Sources, CNN’s Brian Stelter did his best to play up how after the Paris terrorist attack many Americans have had a “fearful, sometimes even xenophobic” reaction. At the same time, the CNN host dismissed fears of a future terrorist attack us unwarranted and irrational.

The CNN host opened his show by declaring the attack in Paris “struck the heart of Western culture, by hitting Paris, they hit home” before he touted the standard liberal line that much of America’s reaction has been “xenophobic” based in “fear which is a “crippling poison.”

While the CNN host accused the American public of harboring “xenophobic” attitudes post-Paris, Stelter initially acknowledged that the threat of terrorism was being taken “seriously” by governments around the world. The CNN host then brought on colleague Fareed Zakaria who eagerly launched into a harsh critique of the American public for apparently being unaware that the war against ISIS was supposedly going well:

So, what we have to do is to provide context, which I think CNN has done a lot of, by giving people an understanding of what's going on, but also what the broader context is, what the response to ISIS is. You know, we've down 8,500 airstrikes against ISIS already. They have lost 15 to 20 percent of their territory.

Stelter eagerly agreed that most Americans have no idea “how many airstrikes have been conducted against ISIS to date” before claiming that Americans have an unjustifiable fear of future terrorist attacks:

You look at current polling that shows that many Americans, most Americans, more than 80% percent, believe there's an imminent threat of a terrorist attack on U.S. soil. And yet, most of the time when those polls are conducted, there's no attack afterwards.

Stelter and Zakaria’s belief that the U.S.’s anti-ISIS strategy was working seems to be at odds with what other journalists at CNN have said, including Christiane Amanpour, who insisted that despite Obama’s insistence, we are in fact not doing enough to destroy the terrorist organization.

Stelter continued his rejection of Americans's justifiable reaction to a terrorist attack which in the case of Paris “hit home” by using the discredited liberal line that America has not experienced a terrorist attack “for years and years and years." The CNN host conveniently omittied the Boston Marathon bombing and the terrorist shooting at Fort Hood, in addition to numerous other attacks that qualify as acts of terrorism.

Zakaria rounded out the segment by once again rejecting concerns by the majority of Americans this time over the issue of allowing additional Syrian refugees into the United States:

BRIAN STELTER: On Friday the 13th, ISIS struck the heart of Western culture, by hitting Paris, they hit home. And so, maybe predictably, much of the rhetoric on TV and the one the web has turned angry, fearful, sometimes even xenophobic. Fear is poison. Fear is a crippling poison. And yet, by all accounts, there is a threat, a threat that governments around the world are taking seriously. So, this is the question for us -- is the media doing its part to put things into proper perspective, separating real threats from red herrings? Or is the media too often part of the problem? Let's begin with the host of CNN's flagship international affairs program, Fareed Zakaria. Now, Fareed, you just asked the questions on "GPS". We’ve switched seats here. So, thanks for sticking around for a few minutes.

STELTER: Let's talk about the press and ISIS. Coverage of ISIS particularly in the last nine days but also much more broadly. I want to start with what President Obama said this morning. It reminded me of what you said in the column many months ago, about how sometimes -- well, you tell me the summary of it, that overreacting that invading is what ISIS wants.

ZAKARIA: Well, if you think about it, you know, we don't really know what ISIS wants. Everyone pontificates. They don't even bother to issue demands. They're so nihilistic. But what do all terrorists want? They're weak. They want to show they are strong. It's an asymmetrical weapon of weak groups that want to show they're strong. And what they're trying to goad you into is an overreaction. So, when Hamas does something, it's trying to get the Israelis to round up all Palestinians, you know, to create an “us versus them” situation, where there are no moderates. What did the Sunnis try to do in Iraq and Syria. They goaded the Shia government into overreacting, rounding up all the Sunnis. In the sense, that's what ISIS is trying to do, create a world between Muslims and non-Muslims. 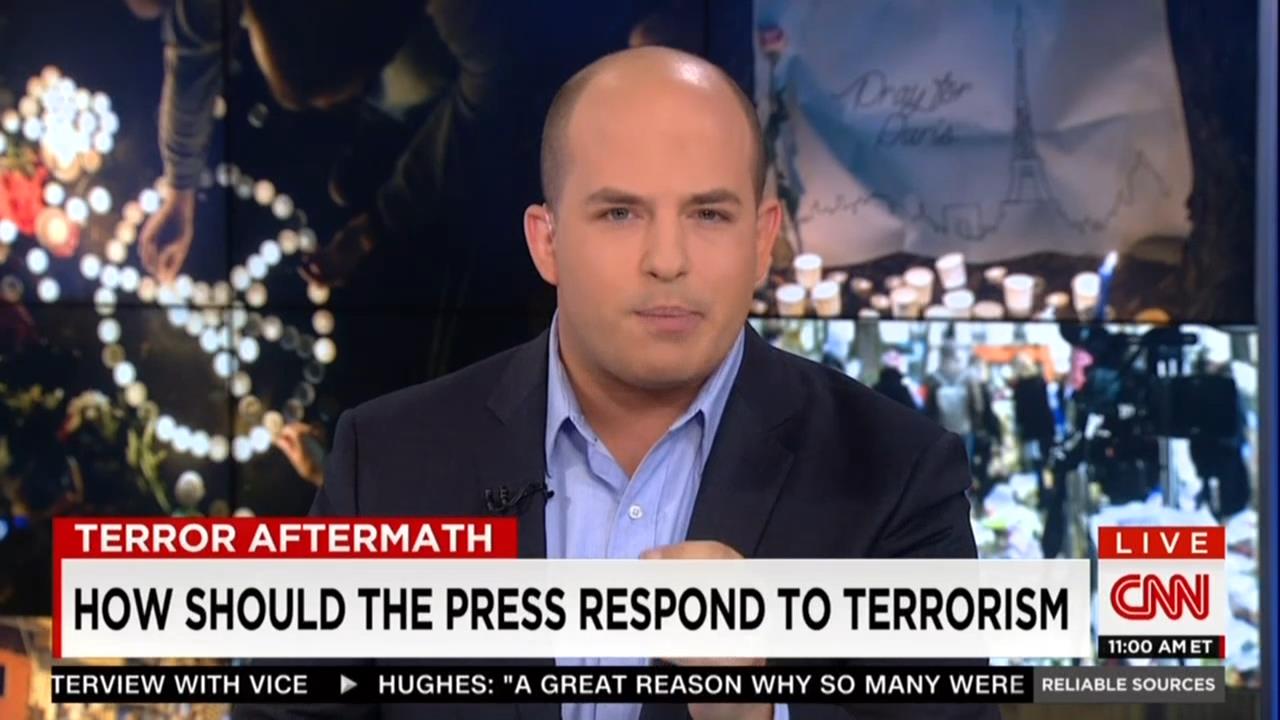 ZAKARIA: It's a very basic human -- but let me remind you. If you look back at the long history of terrorism, these guys never win. You just have to have patience and remember that what you have is the combined power of the world's largest countries, particularly ISIS, which doesn't even have a regional power sponsoring it. But you have to be patient. You have to wear them out.

STELTER: But is that what the modern news cycle lacks, patience?

ZAKARIA: It's tough. Look, I mean, I think that's it's very difficult problem. How do you cover this news, which is dramatic, which is startling, which is scary, and not hype it in a way that people get scared. Alan Simpson, the former senator from Wyoming used to say, whenever you got scared, he said, the answer is, don't watch the news. Well, we don't want people to do that. So, what we have to do is to provide context, which I think CNN has done a lot of, by giving people an understanding of what's going on, but also what the broader context is, what the response to ISIS is. You know, we've down 8,500 airstrikes against ISIS already. They have lost 15 to 20 percent of their territory.

STELTER: I think if you polled Americans, they might not know that. The majority of Americans might not know how many airstrikes have been conducted against ISIS to date. You look at current polling that shows that many Americans, most Americans, more than 80% percent, believe there's an imminent threat of a terrorist attack on U.S. soil. And yet, most of the time when those polls are conducted, there's no attack afterwards. And that's been true for years and years and years.

ZAKARIA: Absolutely. We forget that, you know, al Qaeda, we were scared witless by al Qaeda right after 9/11. And the truth is, initially, it seemed worrying. And then you coalesce all these forces, and you grind it down. The other area where there's this kind of gap between knowledge and fear is on the whole issue of refugees. I mean, most people would not know that the United States has successfully resettled 2 million refugees in this country since 1990, many of them Muslim, from Bosnia, for example.