Politico’s Roger Simon: CPAC Is The ‘Militant Wing’ Of The Republican Party

Nothing is more amusing than having a liberal “columnist” comment on the state of the conservative movement.  It seems as though Politico’s Roger Simon is one such liberal who feels it is his duty to trash conservatism on a regular basis.

Speaking with MSNBC’s Craig Melvin on March 14, Simon commented that CPAC is “the militant wing of the Republican Party.”  Simon, who criticizes conservatives on a regular basis believes that the majority of speakers at CPAC are “on the extremes of American politics.”  [See video after jump.  MP3 audio here.]

Those that Simon considers “extreme” include Mitt Romney, Rand Paul (R-Ky.), and Marco Rubio (R-Fl.).  Simon’s attack on CPAC and Marco Rubio continued with him claiming that:

Most conservatives would object to the term "anti-immigrant," pointing out that they oppose illegal immigration and support those to come to America legally. Of course, Simon would never make that distinction.

Sadly, Simon is no stranger to controversy.  Just this week, Simon blamed the GOP for the cancellation of White House tours.  He also notoriously claimed that being racist helps in Republican primaries.

Simon’s comments on CPAC are fairly tame compared to his past comments but add to a long list of eye-rolling attacks by the liberal Politico columnist. 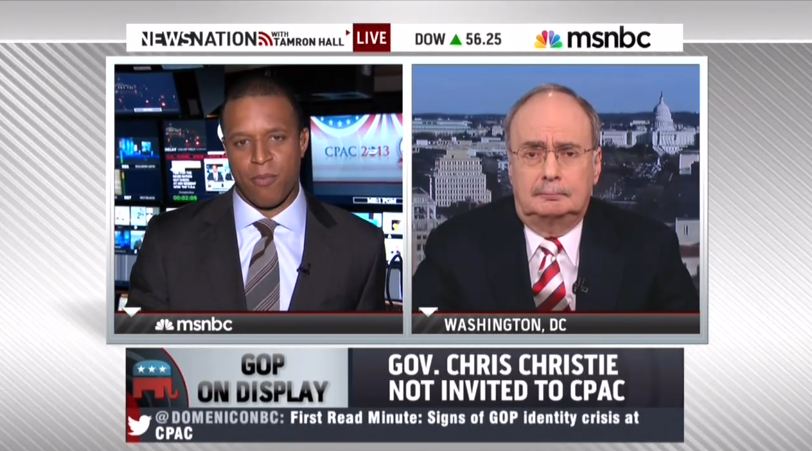 CRAIG MELVIN: As we mentioned earlier, the annual conservative action conference is underway right now just outside D.C. At CPAC, conservative stars like Rand Paul, Marco Rubio and Sarah Palin are the headliners of the three-day event. Florida former Congressman Allen West got the confab started this morning by stirring up the Republican base.

ALLEN WEST: This conference, this audience, these values, all jealously guard conservative identity from liberal wolves in sheep's clothing.

MELVIN: Noticeably absent from the event, Governors Chris Christie and Bob McDonnell. Political columnist Roger Simon writes about the snub saying, quote, GOP wants crazy after all these years. Roger joins me now. Roger good to see you sir. Let's take a look at the list at some of the star speakers who were invited. Mitt Romney, Wayne LaPierre, Donald Trump. When you look at the list there, what strikes you about those names?

ROGER SIMON: What strikes me about those names is that for the most part, they're on the extremes of American politics. CPAC has been described as the militant wing of the Republican Party. And that's true. The question is, is this what the Republican Party really needs? Is this the time for more militant wing? Is this what American citizens are asking for? Or are they asking for just the opposite?

SIMON: We can make of that omission is that he is going to trim his sales, depending on what group he speaks to. He didn't have the courage to talk about immigration to a group that is not pro-immigration in the least. And that's one of the troubles that the Republican Party faces. Its militant wing doesn't want to reach out and make the tent bigger, which seems to doom the Republican party as a national party. And that's why some Republicans look at CPAC and say, this is just crazy. This is exactly the opposite of what we need.

MELVIN: One of the highlights every year at CPAC of course is the presidential straw poll. That’s going to happen Saturday at 5:00 despite the fact that we are still several years away of course from a presidential race. At this point any idea who a front-runner for the CPAC crowd might be?

SIMON: I would guess Rand Paul. I think this is going to be Rand Paul's convention. CPAC has a lot of college kids wandering around it in various stages of sobriety. And like all straw polls, it is fixed in the sense that candidates buy tickets and give them to kids to vote. It is the same way at the Aimes Straw Poll in Iowa. College kids love Rand Paul. Rand Paul gave a speech a few minutes ago to CPAC saying the trouble with the republican party is too many people who are stale and moss covered. Those are pretty much fighting words. They would indicate that he at least thinks the Republican Party should turn to a fresh face like him.

MELVIN: Roger Simon, Politico. Good to see you, thank you.