Given the recent death of Ambassador Chris Stevens in Libya, one would expect the three news networks to investigate the grotesque failures by the federal government to protect our embassies overseas.

Unlike NBC’s Today, ABC and CBS’s Friday morning shows both covered recent State Department emails showing they denied a request by officials in Libya for increased security in May leading up to the terrorist attack on our Libyan Embassy last month.

On Good Morning America, ABC’s Elizabeth Vargas described these emails as potentially ‘explosive’ with Jake Tapper going so far as to question whether or not the State Department did ‘everything they could to protect diplomatic personnel in that country.’

CBS This Morning went even further than GMA, with correspondent John Miller going so far as to say:

What we're learning now is that there were a drumbeat of incidents - about 13 security threats either directly to the embassy – to the consulate - a handful of those - but then, incidents surrounding – in the surrounding area against the British, the Red Cross, and so on. This was building up.

I think the real crux of this is going to be, what was the deteriorating security situation; how much did Washington know; and what did they deliver, in terms of protection? It sounds more like they were taking it away than providing extra.

NBC’s decision to blackout this major failure by the Obama Administration to protect our Libyan Embassy is just another example of NBC News covering up the failures of this administration. 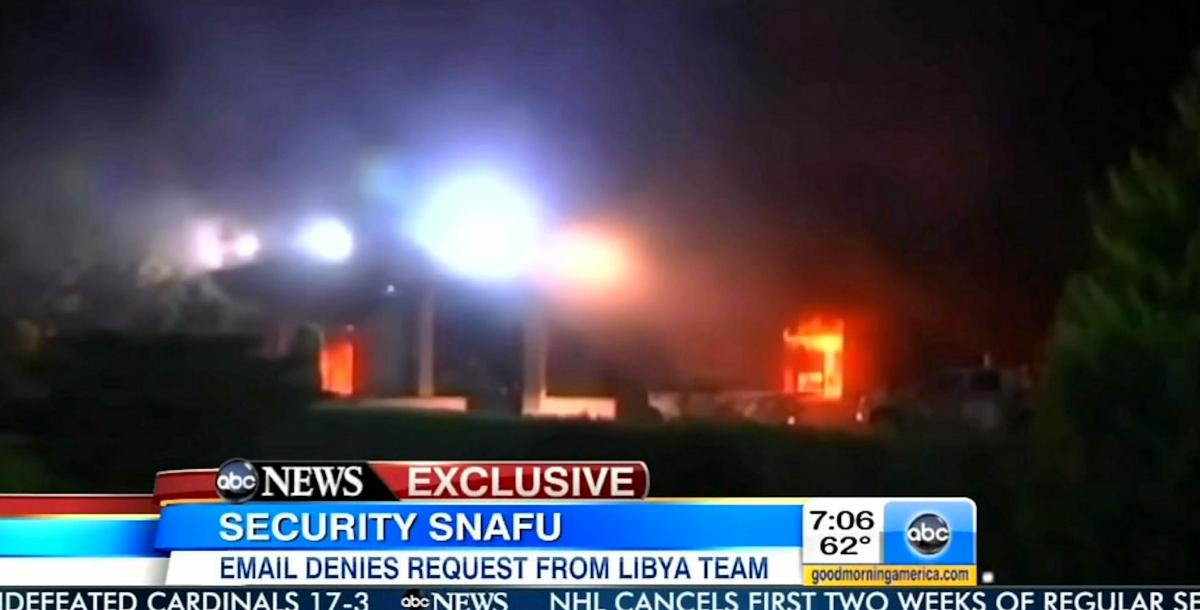 ELIZABETH VARGAS: Alright George, now we're going to turn now to an explosive e-mail from the State Department, that reveals that extra security requested by American diplomats in Libya, before last month's deadly attack were denied. The e-mail informs diplomats and their security team in Benghazi, and Tripoli, including Ambassador Stevens who was just killed, that their extra security for help in flying personnel and equipment around that country was rejected. ABC News has obtained it exclusively and ABC’s Jake Tapper is at the White House with more on this.  And Jake, with the hearings coming up next week, this could be explosive.

JAKE TAPPER: It could be a big deal. Absolutely right, Elizabeth.  After the attack in Benghazi, one of the big questions is, did the Obama Administration recognize the deteriorating security situation in Libya? And did they do everything they could to protect diplomatic personnel in that country? ABC News has obtained this internal e-mail from the State Department in May suggesting that a request by a security support team, this is about 16 special forces soldiers, to keep a small airplane, a dc-3 in that country, to get around more easily, especially with all their weapons, was rejected, Elizabeth.

VARGAS: How has the State Department reacted to the revelations in this email especially given all the attention now to whether or not proper attention and security was given to the teams in Libya?

TAPPER: The State Department says this is not a big deal. Commercial flights were available at the time. And they say there is no evidence that the absence of this airplane had any effect on what happened in September. But Republicans on the hill with the House Oversight Committee, which will be holding hearings, say it is part of a pattern of officials in Washington, denying security requests from Ambassador Stevens and others in Libya Elizabeth.

VARGAS: Obviously a very volatile issue given the four deaths in that country. Jake Tapper, thanks so much from the White House lawn this morning.

CHARLIE ROSE: In Libya Thursday, FBI agents and other investigators visited what's left of the American consulate in Benghazi. Their first visit came three weeks after the attack that killed Ambassador Chris Stevens and three other Americans. Officials tells CBS News there were repeated requests for additional security before the attack.

ROSE: So, what are we finding out about that security, and are we getting the answers that we need?

MILLER: Well, we're going to be learning more. But what we're learning now is that there were a drumbeat of incidents - about 13 security threats either directly to the embassy – to the consulate - a handful of those - but then, incidents surrounding – in the surrounding area against the British, the Red Cross, and so on. This was building up.

ROSE: Why did Ambassador Stevens go to Benghazi, and did they appreciate the danger, and did they, in fact, have enough security for him?

MILLER: Okay. This is the fascinating question, because this is where our story forks off in two directions. I've been at embassies all over the world, and I've seen how security works. And when it comes to the ambassador - whether he's going to make a trip, make that call - in the embassy, the ambassador is king. I mean, that's going to be his call whether to go. But the things that go along with that - which is, the security of the facility he's going to, the security provided to him on the road - a lot of those decisions aren't made there. They're made in Washington, and as we get closer to next Wednesday's congressional oversight hearing, we're going to start learning some – some incredible things.

I've been talking to Sharyl Attkisson. They're working on two witnesses. One is the regional security officer from Benghazi, Eric Nordstrom, who's – who's, we understand, prepared to testify about these raising – rising security threats, and they did ask for more security in cables and memos from Washington. And the other witness they want to get is Charlene Lamb, who is the diplomatic security service at the State Department person, who approves or denies those requests, and I think we're going to – we're going to see a lot of news coming out of that.

NORAH O'DONNELL: I think you're right, John, that we are going to see some news coming out of that. What about the investigation, in terms of who is behind these attacks? What have we learned?

MILLER: I think, you know, the FBI reached that site yesterday. They were able to collect some evidence - document the crime scene - but it is still centering in on Ansar al-Sharia, which is a group in Libya that reads from the al Qaeda narrative, Norah, and some – some other groups around that.

The question is, once they figure out the who-done-it part, which they're pretty close to, what do they do about that? There isn't a criminal justice system in Libya that can really handle an arrest and trial, and bringing them to the United States is fraught with its own issues. So, they're in the decision-making process about once we nail this down, what do we do with them?

ROSE: Why did they have a different story in the beginning that [sic] they have now about whether this was pre-planned?

MILLER: I would – that's a – that is the subject of much debate and consternation. I would actually put less focus on that, because I have been on the other end of the information flow in crisis, where you're getting the reports back from the field. And, Charlie, the first reports are never right. The first day, the second, it takes time to get into focus, and we – we're getting the same reports from our journalist colleagues on the ground to a great degree. So, I think it's – I think the real crux of this is going to be, what was the deteriorating security situation; how much did Washington know; and what did they deliver, in terms of protection? It sounds more like they were taking it away than providing extra.