Ya just can’t make it up.

Here is MSNBC’s Tiffany Cross - no stranger to any far left-wing talking point of the moment - saying this as she guest-hosted Joy Reid’s The ReidOut on Thursday. Said Cross of Republican critics of the FBI raid on former President Donald Trump’s Mar-a-Lago:

It’s not really rhetoric that we can deal with. I mean, you have millions of people turning into a propaganda network every night. And then, as if that were not bad enough, that’s an extremist network itself, you have these fringe popup outlets from OAN to Newsmax.

That train has left the station.

At this point, I do think we have to have serious conversations around preparing for actual violence. People keep saying a civil war is coming. I would say a civil war is here. And I don’t mean to be hyperbolic. We can look at what has happened in the past week alone since all this has happened. We’ve had two people tried to declare war with FBI field offices. I don’t think at this point we’re all gonna go home and pack up our bags and go home and sing ‘Kumbaya.’

Where to begin with this craziness?

First of all, there’s no excuse for attacking FBI field offices, which should be obvious. But what should also be obvious is that over the decades, depending on the “cause” of the moment, various US government agencies have been targeted with violence.

If one is of a certain - ahem! - age, one well recalls attacks by the far left domestic terrorist group the “Weather Underground” that over time targeted the U.S. Capitol, the State Department, Pentagon, the California Attorney General’s office, and a New York City police station. The FBI itself has posted this information on its own website.

Over here at the historical site maintained by the U.S. Marshals service is this reminder of the October 1967 riot at the Pentagon. The riot was a protest of the US role in the Vietnam War and organized by The Mobilization Committee to End the War in Vietnam. Says the Marshals history, after a day-long protest at the Lincoln Memorial:

“At 5:40 p.m., a determined crowd of 35,000 headed for the Pentagon. A smaller segment at the front stormed forward, scaled the walls, and forced their way into the Pentagon. The Deputies and soldiers were taunted and assaulted with vegetables, rocks, and bottles. The troops inside the Pentagon rushed outside as the violence escalated. A full-scale riot erupted.

The riot lasted the night. The Deputy Marshals, acting as the civil authority of the federal government, made all the arrests. As soon as they were arrested, many of the demonstrators simply collapsed, forcing the Deputies to drag them to the waiting prison vans where other Deputies pushed and shoved the recalcitrant demonstrators aboard. The Deputies worked without relief, taking few breaks. Physically exhausted, they responded to the rioters with increasingly rough treatment, though remarkably few injuries. A total of 682 people were arrested. Forty-seven people-demonstrators, soldiers, and U.S. Marshals were injured. By 7:00 o'clock Sunday morning, most of the protesters had left; only 200 remained.” 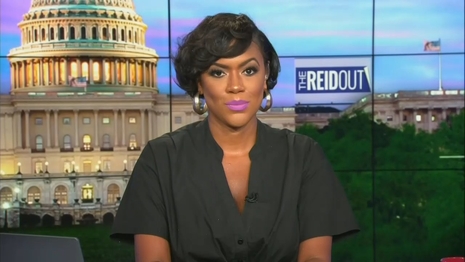 Tiffany Cross says that we have to “have serious conversations around preparing for actual violence. People keep saying a civil war is coming. I would say a civil war is here.”

I would suggest that MSNBC hosts crack open some history books to learn that as objectionable an attack on an FBI field office may be -- and it is -- there is, sadly, nothing new under the American sun with people believing in cause X and using it as an excuse to attack some government building in Washington or elsewhere.

Is that a sad comment on the attackers? Yes. Is it some out of the blue launching of a “civil war”? Hardly.

The real issue over there at MSNBC is the utter lack of historical knowledge that the Tiffany Cross comments illustrate.

On top of which she assigns blame for the violence against that FBI field office. Again, she blamed the so-called civil war on "these fringe pop-up outlets from OAN to Newsmax."

Which is to say she blames Fox, Newsmax and OAN for the violence. Perhaps unthinkingly - ya think?- she is implying that, since Fox, Newsmax and OAN didn’t exist during those attacks in the 1960’s and 1970’s - then those attacks listed by the FBI and US Marshals happened because of the anti-war propaganda from, among others, NBC, the parent company of MSNBC. NBC, of course, was very much in existence during all those violent attacks and its coverage of the Vietnam War, along with that of rivals ABC and CBS, was very much at issue in the day.

All of which is to say that the real propaganda these days comes from Tiffany Cross’s very own network, MSNBC.