What Ibram X. Kendi and Colbert Won't Say About Slavery and Segregation 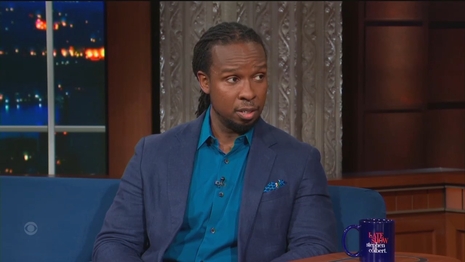 Kendi -- born Ibram Henry Rogers in 1982 -- is now a CBS News contributor and is spreading his critical race theories all over the menu of CBS shows.

Colbert began by falsely asserting that people are trying to prevent the history of racism from being taught, "One of the arguments you hear in opposition to talking to young children or to teaching elementary-level school children about racism or the history of racism in America, their argument goes something along the lines of, ‘Well, you're going to make white kids feel bad about being white.’ What—what-- is your response to that?”

In responding, Kendi said this:

“Well, I would say those people are most concerned about or teaching of slavery. So let's just talk about slavery.”

Well. I’m fine with that. Let’s focus on what Kendi and his fellow leftists don’t like to talk about when they discuss slavery and racism. Let’s start with Kendi’s own book on the subject: How To Be an Antiracist.

As it happens I have the book. And I can attest that in a book that makes much of slavery and segregation, mysteriously, for some reason I just can’t imagine, there is no mention of….the Democratic Party and its staunch history of support for both.

There is no better illustration of Kendi’s avoidance of the subject than when he writes in his book of the infamous Plessy v. Ferguson case. It's merely described by saying the Supreme Court “legalized Jim Crow segregation in 1896.” Notice what was not said? He simply ignores that Plessy was the result of Democrats in the Louisiana legislature passing a law that mandated separate railroad cars for blacks and whites, a practice that became known as “separate but equal.” This was, in fact, how Democrats built their political strength - by using outright racism to build and maintain their base.

The fact not discussed on Colbert’s show with Kendi is that the Democratic Party is, in reality, the Party of Race. It was built on the political support of slave owners, and with slavery abolished (over the objection of Democrats in Congress), Democrats in state legislatures and local governments went about passing all those Jim Crow segregation laws. Those laws segregated public schools, public transportation, restaurants, restrooms and public places in general. Users of everything from water coolers to beaches were judged by skin color thanks to laws passed by Democrats.

In today’s America, the Left is still at it with the race card, with “identity politics” -- now flipped to the idea that we're forever deeply racist - demanding every American be judged by race, and every white American confessing their dreadful "privilege."

And note well. Stephen Colbert was never going to press Kendi on which party it was that violently enforced segregation after Lincoln ended slavery. One suspects Satan’s hot house will freeze over before Colbert ever admits to being a member of that Party of Race.

What one learns from Kendi’s appearance on Colbert, not to mention reading his book, is that when he says “So let's just talk about slavery” he, in fact, won’t. Why?

Maybe because the truth hurts?