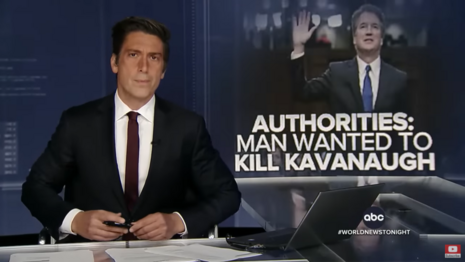 That would be the bottom line of media “coverage” of the 26-year old California man who flew across the country, showing up in the neighborhood of Supreme Court Justice Brett Kavanaugh with, according to Fox News, “a gun, ammunition, a knife, pepper spray, a screwdriver, zip ties, and other gear.” Doing so with one purpose: to assassinate the conservative Justice because of Kavanaugh’s presumed position on the forth coming Roe v. Wade decision. Roske is now being held on a charge of attempted murder.

Over there at Yahoo News, Isaac Schorr analyzed the New York Times “coverage” of Roske and his violent plotting was headlined this way:

“Stories that did earn a spot on the front page of Thursday’s Times included a primer on the primetime January 6 committee hearing set for Thursday night and a piece on returning to office spaces to work after the Covid-19 pandemic. Even on page 20, the Kavanaugh story received short shrift, coming in below the headline “New York A.G. Set to Question Three Trumps Under Oath.”

The Kavanaugh headline does not acknowledge Roske’s stated intention to murder the justice, instead stating ‘Man With Pistol, Crowbar And Zip Ties Is Arrested Near Kavanaugh’s Home.’”

Other prominent media outlets that ignored or downplayed the story according to Yahoo were USA Today, which had exactly zero coverage of the story in its print edition on Thursday, “and Politico Playbook also failed to mention the narrowly avoided assassination of a Supreme Court justice.”

Now, the obvious question. Can you imagine - can you imagine! - if there had been a similar assassination attempt by some right wing nut - against a then-sitting liberal Justice Ruth Bader Ginsburg or any other liberal Justice? Of course you can. This would have been banner headline material in The Times, USA Today and any and all endless television coverage from every left-wing media outlet in the land.

As it happens, the Roske assassination attempt story arrives just as the January 6 Committee is going out of its way to stage hearings that insist President Donald Trump’s language at a White House rally on January 6, 2021 incited the later attack on the Capitol.

But curiously? In the wake of the discovery of the Roske plot to assassinate Justice Kavanaugh, lost in the media memory hole is this 2020 statement by New York Democratic Senator Chuck Schumer, Schumer also the Majority Leader of the United States Senate. That statement, delivered, no less, on the steps of the Supreme Court was this:

The obvious surfaces. If the media and their January 6 Committee allies are trying to hold Trump accountable for  his language before the violence at the Capitol, why aren’t they holding Schumer accountable for language he used about Justice Kavanaugh? After all, would-be assassin Roske was there prowling Justice Kavanaugh’s neighborhood to, borrowing from Schumer, “release the whirlwind” and make the Justice “pay the price.”

What is really in evidence here - yet again - is the usual liberal media double standard. A left-wing activist attempts to kill a conservative Supreme Court Justice? Ho-hum, on to page A-20. A liberal United States Senator - not, co-incidentally, the Majority Leader of the United States Senate - threatened that very Justice that he will face the “whirlwind” and “pay the price” if he writes a court decision the Senator doesn’t like? Ho-hum, no big deal. There will be no Senate investigating committee of Schumer, much less prime time TV coverage of that investigation if it were to occur.

Yet again what is crystal clear here is the alliance between the liberal media and their liberal allies in Congress.

Of all places, there was this headline over an Evan Siegfried op-ed at NBC back in the ancient times of 2018. The headline:

Media bias against conservatives is real, and part of the reason no one trusts the news now.

It might not be conscious, but the way reporters treat conservatives in their coverage has always shown their liberal leanings

Bingo. And the fact that the attempted assassination of a conservative Supreme Court Justice (!!) makes only page 20 of the New York Times illustrates, in a snapshot, how the liberal media plays the game - and plies their “journalism” trade.

Conservatives get it. Which is exactly why conservative media exists - and succeeds.