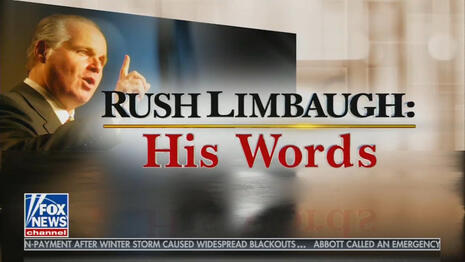 It was, of course, only a matter of time.

With his passing in February of this year, there would inevitably be a last issue of Rush Limbaugh’s monthly magazine – The Limbaugh Letter. That issue has just arrived in my mail box – not the electronic one but the snail mail one as the magazine was indeed quite physical.

As a subscriber to Rush 24/7, I was a subscriber to The Limbaugh Letter. It would arrive in the mail every month like clockwork, with Rush’s latest musings for the magazine written in about 16 concise pages.

That the magazine has been kept going until now is a tribute to Managing Editor Diana Allocco, Creative Director Denise Mei and Contributing Editor James Golden – the latter, of course, the famous Bo Snerdley.

In fact, I so enjoyed reading The Limbaugh Letter every month that I never threw one out. Every issue I have is neatly stacked - by date of course - on a couple bookcase shelves.

In particular I loved a regular section by Rush titled “My Conversation With….”, in which he would interview a conservative name in the news. The guests were extraordinary. A sample: Economist Thomas Sowell, White House press secretary Kayleigh McEnany, James O’Keefe of Project Veritas, Wayne Lapierre of the NRA, Texas Congressman Louie Gohmert, Fox Legal Analyst Gregg Jarrett, Matt Schlapp of the American Conservative Union, South Carolina Senator Lindsey Graham, journalist John Solomon, historian Victor Davis Hanson, Florida Governor Ron DeSantis and more. And oh yes. On one occasion, to my amazement, I was invited to appear and spent time on the phone with Rush as we talked about Donald Trump and more.

The last, freshly arrived issue dated October of 2021 features a tribute to Rush himself, aptly titled “Forever Dittos, Rush!” The piece is indeed a wonderful tribute, filled with the indelible memories of Rush that are shared by so many millions of his fans.

Among the memories is this quite accurate assessment of just why so many Americans loved Rush. It says: “You not only spoke for us, you woke us up and connected us to each other as an enormous force.” Exactly.

We knew right away you were one of us, we who had no voice in the media or culture. All of a sudden the things we already thought and felt and believed and held dear were for the first time reflected in one corner of the media. Each of us, who had till then believed we were nearly alone or somehow oddball for not swallowing the liberal mainstream media line, immediately realized a critical truth that the left had tried for decades to hide: there are millions upon millions of us. We are everywhere. We are, in fact, the majority in this country. We truly did not understand that until you, Rush. You not only spoke for us, you woke us up and connected us to each other as an enormous force to be reckoned with. And once we knew, there was no going back.

The Limbaugh Letter was a monthly treasure trove of information and spot on analysis.

Leafing through my collection of back issues the breadth of topics featured amaze. Rush on the NFL, Kim Jong Un and North Korea, and, memorably, “Democrats are exposing themselves as the wacko-radical America-hating Marxists they really are.”

In another issue, the Parkland, Florida killing of 14 kids and three teachers at Marjorie Stoneman Douglas high school is discussed with a focus on the startling fact that the killer, teenager Nikolas Cruz, had 39 police visits to his home by police - but was never arrested. Why? Because of a quite deliberate Obama policy called the PROMISE - Preventing Recidivism through Opportunities, Mentoring, Interventions, Supports & Education program. Had Cruz been arrested just once for disorderly conduct, the Letter points out, it would have raised a red flag when he bought a firearm.

There was a “Special Kind of Stupid” section on everything from “The Left’s New Money-Laundering Machine” to “Demonizing White Men” to “The Crimes Mueller Ignored” - and oh so much more.

In sum, The Limbaugh Letter was a monthly gem of conservative thought. And as Rush wrote in one issue in a piece titled “They Still Blame Me!”, “the left is still cursing August 1, 1988, the day EIB was born.”

So the final moment of The Limbaugh Letter has arrived. It is, as with Rush’s passing, the moment to say farewell to an old and treasured friend.

And as Managing Editor Diana Allocco, Rush’s “Editrix”, writes in her own farewell, Rush was never shy about the mission of conservatives: “To shine the light of truth.” She adds: “I can hear Rush’s voice, can’t you? He’s saying, ‘So, get to it!’”