Imagine for a moment that Donald Trump were still president. Imagine that he went on television and said something like this:

“The Department of Labor is developing an emergency rule to require all employers with 100 or more employees and together employ over 80 million workers to ensure that their workforces are fully vaccinated or show a negative test at least once a week.”

That means, of course, that among other things, The New York Times, The Washington Post, ABC, CBS, NBC, CNN and MSNBC, all of whom employ far more than 100 employees, would be ordered by the Trump administration to comply. And if they failed to comply with the Trump order, they would have to pay a $14,000 fine per violation.

And all those liberal media outlets would just quietly obey Trump, right?

Who’s kidding who? The instant Trump vanished from the television screen the editorialists, columnists and television commentators of all those liberal media outlets would be out front accusing Trump of an assault on a free press. The government, they would hotly insist, has zero right to tell any newspaper or television network what to do. The First Amendment would be instantly cited, reminding their audiences that it quite specifically says that “Congress shall make no law ….abridging the freedom of speech, or of the press.” One lawsuit after another would be filed against Trump’s mandate and that $14,000 fine by these liberal media outlets.

Suffice to say, the left-wing media firestorm has not happened because, doubtless, the president is named Biden, not Trump. 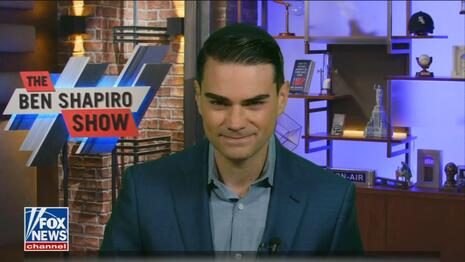 But over there at the conservative website The Daily Wire (created and run by Ben Shapiro), the rights of a free press are being taken seriously. Jeremy Boreing, the host of Daily Wire Backstage and the co-founder and co-CEO of The Daily Wire has sent out a note that says, in part, this:

“Earlier this afternoon, Joe Biden announced that he is weaponizing the federal agency OSHA to force all companies with 100+ employees to either mandate vaccines or test their employees for COVID at least once per week.

Let me be clear: this is one of the most tyrannical overreaches of government power I have ever seen.

This new ultimatum from the Biden administration will impact over 80 million workers in private sector businesses, including The Daily Wire. Companies that refuse to comply will face up to $14,000 in fines for each violation. They are trying to bully into submission any company that refuses to bend the knee to this tyranny.

Because the stakes are so high, I suspect most businesses will comply with Biden’s unconstitutional edict.

The Daily Wire will not comply with this tyrannical vaccine mandate.

Our legal team is already preparing for a potential lawsuit against the Biden administration.”

The note is also a pitch for money to help fund the lawsuit.

Boreing is 100 percent right. Whatever else this bit of Biden authoritarianism may be, it is a direct assault on a free press. The question is: Where exactly will all those aforementioned liberal media outlets come down? Will they be joining The Daily Wire in a fight to keep the Biden Administration from ordering newspapers and television networks to comply? Or will they simply stay silent and let the federal government tell them what they may or may not do?

Let’s be clear. If any private company wants to make being vaccinated or tested regularly a company rule, that’s completely different. As Biden did in fact note, media companies Fox News and Disney have done just that. But Fox News and Disney made their own decision. They do not and did not take orders from the President of the United States - and no media company ever should.

And ominously, Biden’s threats are not limited to the press.  He also made clear if various state governors - not coincidentally all Republicans - “will not help, if those governors won’t help us beat the pandemic, I’ll use my power as president to get them out of the way.”

Got that? Biden plans to get elected governors “out of the way.” Does it really need to be said that governors answer to their constituents - not Joe Biden?

Republican Governor of South Carolina Henry McMaster was blunt and fiery in his Twitter reply:

“The American Dream has turned into a nightmare under President Biden and the radical Democrats. They have declared war against capitalism, thumbed their noses at the Constitution, and empowered our enemies abroad.

Rest assured, we will fight them to the gates of hell to protect the liberty and livelihood of every South Carolinian.”

“Biden’s vaccine mandate is an assault on private businesses. I issued an Executive Order protecting Texans’ right to choose whether they get the COVID vaccine & added it to the special session agenda. Texas is already working to halt this power grab.”

Make no mistake. If Joe Biden is allowed to get away with telling any media outlet what to do, that will eventually be seen as precedent.

Three cheers for The Daily Wire.