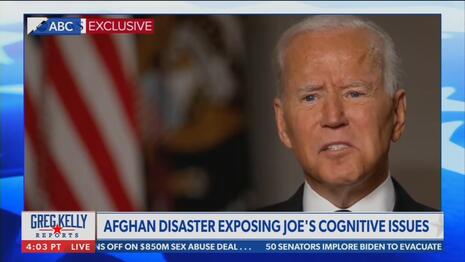 It was obvious to any sentient observer in 2020. In defending himself on Afghanistan, Joe Biden fumbled his words, made weird comments and generally didn't seem up to the job of being president. And the media pretended there was nothing to see. This week Newsmax host Greg Kelly took the problem head on from a media perspective.

Afghanistan, Kelly observed with accompanying quite vivid video, “is a full blown disaster.” Which is most decidedly true.

After a video montage of Biden doing his bizarre kissing and hair-smelling routines, Kelly zeroed in again on Biden’s competence —  and the media.

“The political press, they say they exist so they can vet these people (presidential candidates) for us. To apply pressure, to pressure-test candidates to see how they perform at the presidential level. The thing is, they never really did that for Joe Biden. They backed off big time when Covid started. Then Joe Biden, literally, became untouchable. And of course, they had to do anything to get Donald Trump out. So it was hands-off coverage. And what are we left with? A guy who can’t handle the job. And now babies are subject to this.”

At that Kelly turns to the horrifying videos of Afghan mothers tossing their babies over barbed wire to hopefully get them on a rescue plane: “Joe Biden bears a lot of responsibility. But so do his supporters in the media.”

Kelly went on to accuse the liberal media of “complicity” when it comes to covering Joe Biden. “They should have been all over” Biden he correctly notes. “Instead, they weren’t. And now we’re seeing the consequences. Disaster that could have been avoided in Afghanistan. They never pressure-tested Joe Biden as a candidate.”

COVID was Biden’s way out, he notes. Allowing him to escape scrutiny, pointing out that Biden’s own staff says COVID was “the best thing to ever happen to him.” The reason is clear. With COVID, gone was the practice of getting up close and personal with the candidate. With COVID, press availabilities were reduced to a handful of reporters spaced six feet apart in circles, negating the ability to be up close and ask intense questions. “They protected” Biden he says, “every step of the way.”  But why?

Kelly answers exactly: “They hated Donald Trump that much. They really did.” Kelly goes on to illustrate with clips of the media acting as “referees” protecting Joe Biden during the campaign. The clips include Fox’s Chris Wallace in the first 2020 presidential debate shutting down Trump trying to talk about Hunter Biden’s corruption problems. “I want to talk about climate change,” says Wallace. “So do I,” chimes in Biden.

“They all did this” kind of thing for Biden, Kelly remarks, noting it was both print and TV journalists. There were more clips from the NBC Trump-Biden debate, followed by a C-SPAN debate where Trump is shut down as he calls Biden a “corrupt politician.”  “I want to talk about race” interrupts the moderator. Cut to Norah O’Donnell on CBS asking Biden if a lot of people will vote for him “simply because you’re not Donald Trump?”

“See what they did?” asks Kelly. “They didn’t pressure-test him, and pressure comes with the job of being president. Why is he making such bad decisions now? We could have known this a long time ago. I knew it, but not everybody did.” 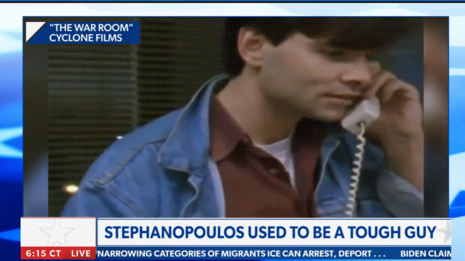 ABC’s George Stephanopoulos comes in for a mocking as someone who used to be a “tough guy.” A famous clip from the documentary of the 1992 Bill Clinton campaign The War Room shows the then-Clinton-campaign aide Stephanopoulos on the phone threatening a Democrat who was prepping an unfavorable story for media consumption. Kelly notes he's not like Stephanopoulos. He's admitting he's a conservative, pro-Trump opinion show host. But Stephanopoulos on his show “pretends that he’s neutral and objective. He’s not.”

“The game is rigged,” Kelly says of the media game. “And they never stop lying. Especially when they raise their voices and promise that they’re going to ‘fight for us’.” Kelly runs the uncanny clips of Joe Biden, Hillary Clinton and Barack Obama all out (separately) on the stump promising they will “fight for us.” He notes that Trump really did fight for the American people - “and they hated it.”

“We saw Joe Biden run yesterday,” Kelly says, cuing the last seconds of Biden’s Monday speech on Afghanistan followed by his turning on his heel and slowly walking out of the East Room as reporters finally get around to  bellowing questions.

In all of this, Greg Kelly is spot on with something the media has studiously avoided discussing up until now. The harsh fact is that in their zeal to oust Donald Trump, the mainstream media gave Joe Biden a pass as he ran for president.

Now, it’s too late. Biden is president and as the pressure of Afghanistan, the border crisis, COVID and more has fallen on him, Biden has made one bad decision after another. The results of those decisions are unavoidably visible on every television screen. So much so that even many in the liberal media are left shaking their heads in shock at the scope of it all. (As here, amazingly, at CNN. The headline: “Biden's botched Afghan exit is a disaster at home and abroad long in the making”) 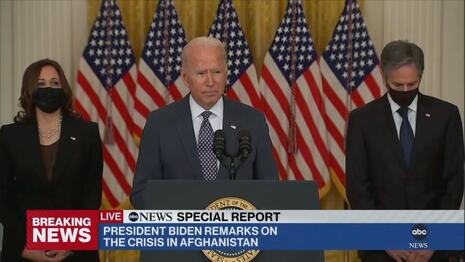 Was what’s happening in Afghanistan avoidable? Of course it was, and there are any number of national security experts out there - including a number of Democrats - who have made bold to say so.

But in this instance what is vividly in play is exactly what can happen when the media - swept up in their own liberal bias (and in this case, Trump-hatred) don’t do their job.

Now? Precisely as Greg Kelly illustrates, now it's too late. Joe Biden has turned out to be an utter disaster in the middle of a literal global crisis in part because the media gave him a pass. The media, in fact, bears real responsibility for the unfolding Afghanistan disaster.

Is there a lesson there for the media. Yes. Will they learn it?

Put me down as doubtful.