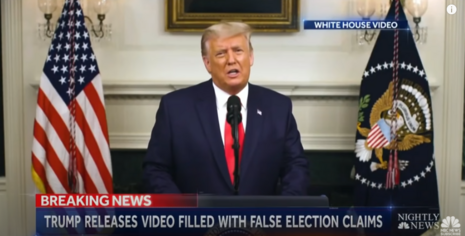 The liberal media’s herd of group thinkers is on stampede.

Here is but a sample.

MSNBC: Trump maintains baseless claims of voter fraud: 'What kind of a court system is this?’

Mediaite: Trump Pushes Series of Baseless Election Fraud Claims to Maria Bartiromo, Complains About Legal Setbacks: ‘What Kind of Court System Is This?’

I could cite more, many more, similar headlines. But a few things to consider:

It’s not as though any serious person doubts that voter fraud exists. If you go to the Heritage Foundation’s voter fraud page, you can search for yourself. You can click on examples from all 50 states, including ones from 2020.

Secondly, the President’s charges of voter fraud are not “baseless.” All one has to do is read the lawsuits in Pennsylvania, Georgia and Michigan to read one affidavit after another from poll workers that attest to witnessing voter fraud.

In the case of Georgia, to cite but one person, there is an affidavit from one Navid Keshavarz-Nia. He gave an affidavit that says he has examined the Georgia voting data and the data from other battleground states as presented by, yes, The New York Times, and among other things, says this:

“I conclude with high confidence that the election 2020 data were altered in all battleground states resulting in hundreds of thousands of votes that were cast for President Trump to be transferred to Vice President Biden.

Whether one takes the time to walk through the accounts on Here is the Evidence, it is crystal clear that all these media outlets are pushing a — yes —  “baseless” narrative that the claims by the President are “baseless.”

As Hans A. Von Spakovsky wrote in Heritage.org before the election, the media just doesn’t care:

USA Today and PBS have not spent any time or resources investigating, or reporting on, the findings of a recent report by the Public Interest Legal Foundation that exposed thousands of individuals who may have illegally voted more than once in the 2016 and 2018 elections. Or a 2017 report by the Government Accountability Institute that reported on approximately 8,500 individuals who may have voted twice in the 2016 election.

It is important to remember that every fraudulent vote that is cast invalidates the vote of an eligible voter. We have many close elections in this country, and plenty of people stand to gain financially or through increased access to powerful figures who have incentives to cheat, as well as some individuals who just want to provide a boost to their preferred candidate.

The question, then, is why? Why in the world would all these liberal media outlets running these stories put themselves out there when any decent fact checker can quickly disprove them?

The answer is simple. They hate President Donald Trump. And they have plenty of contempt for those who supported him. In that category look no further than the Project Veritas taping of a CNN editorial meeting, headlined by The Washington Times thusly:

“A CNN senior vice president chalked up President Trump’s support in Miami to some Cuban-Americans being “very attracted to bullies,” which she called “terrifying,” according to audio recordings released late Wednesday by Project Veritas.

…The latest releases feature a woman identified as Cynthia Hudson, CNN senior vice president and general manager for CNN en Español, who said in a recording dated Sept. 9 that Mr. Trump had used “the communism, socialism, rhetoric as part of his hook for the Cubans in Miami.”

“[T]he only reason they are supporting Trump is because of that narrative,” she said. “And that narrative, and the fact that sadly, I have to say, there’s a population that’s very attracted to bullies.”

Which is to say, what is on display here is exactly the contempt liberal elites have for Trump supporters, Cuban Americans in this case.

To sum up? The liberal media is hellbent on portraying charges of voter fraud and a rigged election as “baseless.” When in reality the only thing that is “baseless” and “fraudulent” here are the headlines that are trying to convince Americans there’s nothing to see here and just move along.

To say the least, millions of Americans aren’t buying it.