Chris Wallace doesn’t get it.

As noted here by NB's own Nicholas Fondacaro, the Fox anchor who moderated the first Trump-Biden debate said this to his Fox colleague Bill Hemmer about the chaos that erupted during the debate: 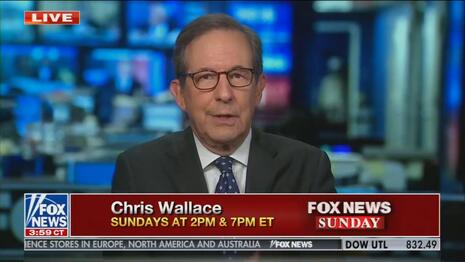 “The frustration here, Bill, is this, that here was my debate book. And, literally, hundreds of man-hours and woman-hours between me and my researcher went into try to prepare a serious, substantive debate. And on so many issues, Biden's tax-and-spending plans, Trump's climate and environmental policies, I was really hoping for the -- for the debate that I think America wanted to see, which was a serious exchange of views.

And I felt like I had gotten together all of the ingredients. I had baked this beautiful, delicious cake. And then, frankly, the President put his foot in it. And that was frustrating, because -- frustrating for me, because I tried hard to prepare for a serious debate.”

Wallace somehow failed to grasp that Joe Biden's constant interruptions came from his 2012 bag of tricks, and that Donald Trump somehow how ruined his "beautiful cake" by not letting Biden dominate the debate with his contempt for Trump.

Venture over here to Kimberley Strassel’s Wall Street Journal column  titled "The James Comey Election: His testimony this week was a reminder of everything that enrages Trump voters."

Ms. Strassel’s column has no mention of  Wallace when mentioning the debate. Or on polls showing Biden “won” the debate. Rather it focuses on the virtual beaming-in of former FBI Director James Comey in testimony to Senator Lindsey Graham’s Senate Judiciary Committee. Notes Strassel -- with bold print supplied:

The political elite remain puzzled—and in agony—over how Donald Trump could still be in the race. A bullying debater! A purveyor of mistruths! A would-be autocrat! How has our country come to this?

The answer sat staring at them on a videolink this Wednesday, in the smug countenance of James Comey.

This obvious truth will be missed by the left and the media, which continue to comfort themselves with the fiction that Mr. Trump won in 2016 by preying on the weak and ill-informed. The opposite is true. The businessman was propelled to office on the fury of those who had seen too much. They’d watched for decades as an insulated elected class—Democrat and Republican alike—broke promises, failed to solve problems, and blamed it on the system.

These voters had watched the swamp take over—IRS targeters, self-righteous prosecutors, zealous regulators—armed with stunning powers and a mentality that they were entitled to make the rules, to tell the little people what was best for them. Voters fumed over the double standard. Hillary Clinton deleted government emails with abandon, while a 77-year-old Navy veteran went to prison for building a pond in contravention of “navigable water” rules.

Mr. Comey personifies what enrages those Americans. His testimony this week was a vivid reminder that the election won’t hinge only on the issues as defined by the media elite. Tuesday’s brawl was mostly about the virus, the economy, violence in the streets, the Supreme Court. But November’s vote for many Americans will be a choice between an administration that believes we the people should run Washington, and those who believe the swamp should rule the masses.”

Chris Wallace is not James Comey. But without doubt Wallace fails to understand that Strassel’s point is exactly the reason behind the President putting his foot in Wallace’s beautiful debate cake. As Strassel says, Americans had “watched for decades as an insulated elected class—Democrat and Republican alike—broke promises, failed to solve problems, and blamed it on the system.”

Fox anchor or not, for better or worse, fairly or unfairly, Chris Wallace was seen by many - starting with Trump himself - as the elite media’s representation of that “insulated” class. As this cartoon captured, depicting Trump and Wallace as the real debaters with Biden cowering below Wallace.

There was and is no recognition that it is exactly the idea that the media - and in this case the Commission on Presidential Debates as well - makes the “rules” - and the rules are not applied fairly. Those rules are seen as heavily tilted against media elite non-favorites. Indeed, the “Trump War Room” was quick to tweet out that:

In the immediate aftermath of the debate, the elite media was out there with instantaneous condemnation of Trump, unwittingly sending the message to Trump supporters that their belief in media bias is vindicated - yet again.

Let me close with this story.

There are all kinds of polls out there saying Joe Biden is ahead of Trump here in my home state of Pennsylvania. (Just as they said Hillary Clinton was winning Pennsylvania four years ago - when she lost the state.)

A week ago, President Trump stepped into the Rose Garden to announce Judge Amy Coney Barrett as his nominee for the vacant Supreme Court seat. At the Harrisburg, Pennsylvania airport, I watched the nomination on a large screen that was showing the scene to around 15,000 Trump supporters gathered at the airport for a rally. They cheered Trump - and they went wild for Barrett’s appearance.

Two hours later Trump landed in Air Force One right in front of us. His appearance set off a thunderously enthusiastic response from the rally goers.  When Joe Biden shows up in the state there are a relative handful of attendees - frequently in the hundreds. There simply is no comparison between the two in terms of the response they draw when appearing in this state, and yes this was true before the virus arrived as well.

What was on display in Harrisburg a week ago was exactly what Strassel pinpoints as “the fury of those who had seen too much.”

The point? One doesn’t see the media reporting on that kind of stark difference - or the reason for it. Instead, as with Chris Wallace, they focus on whatever they see as their “beautiful cake” -- and demand and expect adherence to their rules.

On his Friday show, Rush Limbaugh, in the wake of the announcement of the President having the virus, promptly advised going around the elite media with virtual rallies -- and offered his show as the venue for the President to come on for “radio rallies.”

As this is written the White House has yet to respond. But you can be certain that if Trump accepts, there will be an outraged response from the media that he is not following the “rules.” And they will not be  understanding -- as Chris Wallace seems not to understand and Kimberley Strassel does understand -- that not following the rules of the swamp’s media is exactly why Trump was elected in the first place.

And may be again.