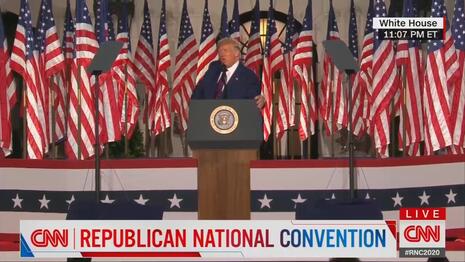 Liberal media has this amusing deal where they “fact check” Donald Trump but curiously are not so big on doing the same with Joe Biden.

Fox News has taken note of this curious deal at CNN with so-called fact checker Daniel Dale. Fox headlined their story this way: “CNN fact-checker ignores Biden inaccuracies despite vow to report on 'both sides.'”

The story began by saying this:

CNN in-house fact-checker Daniel Dale is quick to point out inaccuracies made by President Trump, but he has virtually ignored the inaccuracies of the presumptive Democratic nominee Joe Biden despite his previous vow to fact-check 2020 candidates on both sides of the aisle.

Dale, who appeared frequently on CNN as the Toronto Star's Washington bureau chief before officially being hired by the liberal network in 2019, has become a favorite among CNN's anchors to refute claims Trump made at the latest press briefing or campaign rally. Dale also writes lengthy fact-checking articles for CNN's website that have been focused almost exclusively on Trump.”

But there is more here than the typical liberal media double standard.

Dale himself routinely issues false statements in his so-called fact checking. He did it with the Trump acceptance speech this week, and on other occasions as well.

Where to start? There are so many, but let’s start with these three.

Over here at CNN, Dale seemed to forget the history of birtherism being invented by a Democrat and used against the Republicans.

As I once patiently explained on CNN myself and have noted again right here at NewsBusters, birtherism was invented by Democrat operative Arthur Hinman in the 1880s. It was used against Republican President Chester Alan Arthur, accusing the then-President of being born not in Vermont as he claimed but rather in Canada - making him ineligible to be president. It has been used in the ensuing years by Democrats against a succession of Republican presidential candidates, specifically Charles Evans Hughes in 1916, Barry Goldwater in 1964, George Romney in 1968, Lowell Weicker in 1976 (Weicker, born in Paris, declined to run), and John McCain in 2008. Trump raised the issue with Ted Cruz in the 2016 primaries.

Not a peep from Dale about any of this.

Per Mediaite here are some other Dale un-facts.

Newsflash? Stopping “further additional construction” is effectively taking down the plans for a border wall not yet built. The idea of the wall, of course, is to enforce the US border and stop the flow of illegal immigration. Stopping “further additional construction” of that wall is the equivalent of announcing the US border will not be effectively enforced - creating an “open border.”

Here’s one of my favorite Dale-isms:

“Trump said ‘I have done more for the African American community than any president since Abraham Lincoln,’ That is ludicrous, Lyndon Johnson for one sign the Civil Rights Act and the Voting Rights Act.”

Wow. Context, please? Dale fails completely to mention why those acts needed to be passed in the first place --- and that they had overwhelming support from Republicans --- which was not true of Democrats.

The substance of the 1964 and 1965 Civil Rights and Voting Rights Act had been passed - over the opposition of Democrats - a hundred years earlier.

Dale conveniently --- ludicrously? --- leaves out that Democrats built their party by actively opposing racial equality. The party supported slavery in its first five presidential platforms. It opposed passage of the 13th, 14th and 15th amendments .The 13th abolished slavery. The 14th effectively guaranteed due process and equal protection to former slaves. The 15th gave black Americans the right to vote.

Dale is silent about Democratic opposition to the Civil Rights Act of 1866 that enabled blacks rights of private property, signing contracts, and testifying in legal cases. Not a word about Democratic opposition to the Civil Rights Acts of 1870 and 1871 which prohibited discrimination in voting rights by race. They also authorized the president to use the military to enforce the laws, and federal marshals to arrest those who violated them.

Not a word from Dale either about the Democratic opposition to the 1875 Civil Rights Act that made racial discrimination illegal in public places and public accommodations. These laws were either passed over the veto of Democrat President Andrew Johnson (1866) or signed by Republican President Ulysses S. Grant (1870, 1871 and 1875.)

They were then undermined and effectively made useless by Democrats passage in the former Confederate states of Jim Crow “separate but equal” laws --- which is why the 1964 and 1965 laws had to passed as a “do-over” of the earlier 19th century civil rights laws. And, of course, not a word from Dale about Democratic President Woodrow Wilson, an ardent segregationist who segregated the federal government, not to mentioned screened the then-new pro-Ku Klux Klan film Birth of a Nation at the White House.

Suffice to say the reason all those African Americans at the Republican National Convention --- with names like Alice Johnson, Burgess Owens, Jack Brewer and Stacy Washington --- were there to support Trump is precisely because he has done so much to help the African-American community. From his critical support of the First Step Act, which released harshly penalized Americans --- 90 percent of them black --- from jail to support for “opportunity zones” in financially depressed black communities to increasing financial support for historically black colleges and universities, Trump has stepped up to aid black communities in America time and time again exactly in a way that would make Lincoln proud. It is ludicrous to pretend otherwise.

There is more --- oh so much more --- in this liberal media game of “fact checking” supposed Trump “lies” that aren’t lies while giving Biden’s Democrats a pass or just ignoring their history completely.

But CNNer Dale’s “fact-checking” that isn’t is, yet again, a reminder that the liberal media views itself not as an objective reporter of events but rather as allies of the Democratic Party and pillars of the Liberal State Media.

And they will be repeatedly doing stunts like this “fact checking” routine during the final run-up to the 2020 election.