The Hypocrisy of the White House Press Corps

So the White House - make that quite specifically the President - was irked at the reporter.

The reporter had the audacity to ask the President a question and the president took offense at being “interrupted.”

“Why do you favor foreigners over American workers?” asked the reporter. The President, near the end of a statement in which he announced a new executive order on the children of illegal immigrants, sharply responded “Excuse me, sir, but it’s not time for questions.”

REPORTER: “Are you going to take questions?”

PRESIDENT: “Not while I’m speaking.”

The President than finished his remarks uninterrupted. He said:

“In answer to your question, sir — and the next time I’d prefer you’d let me finish my statement before you ask that question — is this is the right thing to do for the American people.”

When the President did finish, the reporter tried to do a follow-up. And got this presidential response:

PRESIDENT: “I didn’t ask for an argument. I’m answering your question.”

“I timed the question believing the president was closing his remarks, because naturally I have no intention of interrupting the President of the United States," Munro said in a statement posted on the Caller's website. "I know he rarely takes questions before walking away from the podium. When I asked the question as he finished his speech, he turned his back on the many reporters, and walked away while I and at least one other reporter asked questions.”

What is glaringly obvious in comparing the two situations is just how out-and-out biased is the media. 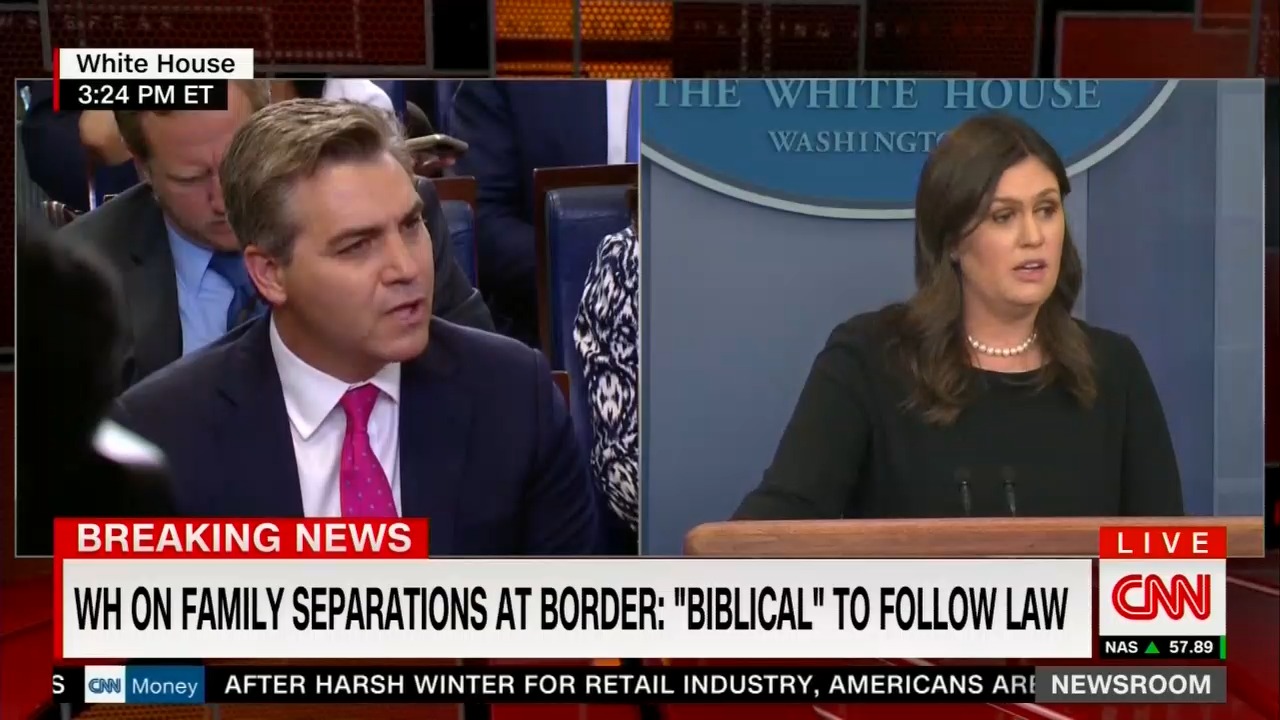 This week, as Collins burst out with a question in the Oval Office, violating protocol, the White House disinvited her  - but not CNN - from the next event, a presidential appearance in the Rose Garden with the head of the European Union. And the media went in to meltdown mode, rallying to Collins with all sorts of dire warnings that the Trump White House had trampled on the First Amendment.

But what happened with the media when reporter Munro from the conservative Daily Caller had the unmitigated gall to do what Collins did - ask a question of the President? There was zero media agitation about Munro’s First Amendment rights. In fact, let’s take a quick trip back down memory lane courtesy of Breitbart to see what the press had to say about a reporter asking Obama a question he didn’t want to answer. Here are a few headlines with links from the day:

“In a surprising breach of etiquette, President Barack Obama's Rose Garden remarks on Friday were interrupted by heckling from reporter Neil Munro of the website Daily Caller, whose editor-in-chief is conservative commentator Tucker Carlson.”

“….Munro’s actions were unacceptable, and need to be sanctioned.”

“President Obama was heckled by a reporter during his immigration remarks on Friday.

…ABC’s Diane Sawyer, who was anchoring the network’s breaking news coverage with George Stephanopoulos, described the man who interrupted Obama as someone who was ‘clearly considered a heckler.’”

“President Obama was in the middle of a press briefing announcing his revised immigration policy Friday afternoon when he was interrupted by a heckling reporter.”

From The Atlantic: “Who Is Neil Munro and Why Is He Interrupting the President?”

And in the priceless category is this from Clay Waters right here at NewsBusters when all of this unfolded in 2012: “New York Times, Rest of Media Aghast Over Neil Munro Interrupting Obama's Speech.”

Waters noted: “The Times was kinder to an Iraqi journalist who hurled a shoe at President Bush during a December 2008 press conference in Baghdad, emphasizing his 'defiant act' and 'hero status' in Iraq.”

The Times headline on the Stelter story of Munro:  “Reporter Interrupts Obama During Statement on Immigration.”

“The interruption stunned White House correspondents and television viewers. And it clearly surprised President Obama, too.

….By shouting out and repeatedly interrupting the president during a speech, Mr. Munro violated decorum at the White House and generated online shouts of disapproval from other reporters, analysts and historians. The incident took place two weeks after the president’s top strategist, David Axelrod, was nearly drowned out at a campaign event by hecklers who had come to support Mitt Romney.

Another incident that came to mind to some was when Representative Joe Wilson, Republican of South Carolina, shouted ‘You lie’ during an address to Congress by Mr. Obama in 2009.

The White House press office did not immediately comment on the exchange. But it quickly became evident that Mr. Munro had distracted from the president’s point by becoming part of the story himself.”

“Journalists reacted with dismay when the Trump administration barred CNN's Kaitlan Collins from attending a presidential event in the Rose Garden.

Note well. When the conservative Daily Caller reporter Neil Munro asked an “inappropriate” question of Obama -the White House press corps and other journalists all showed unity - with Obama over the reporter. There was zero talk about the First Amendment, and Munro was widely depicted as a “heckler.”

But when the liberal CNN’s reporters - Acosta or Collins -  do something the Trump White House considers inappropriate - the White House press corps rallies to the reporter.

What do we have here?  That would be hypocrisy, a double standard from both the White House press corps and the larger media that is wider than the Grand Canyon.

And the media wonders why it has lost its credibility? Really?