The Liberal Media’s Hypocrisy: Imagine If Jared Kushner Was a Kennedy 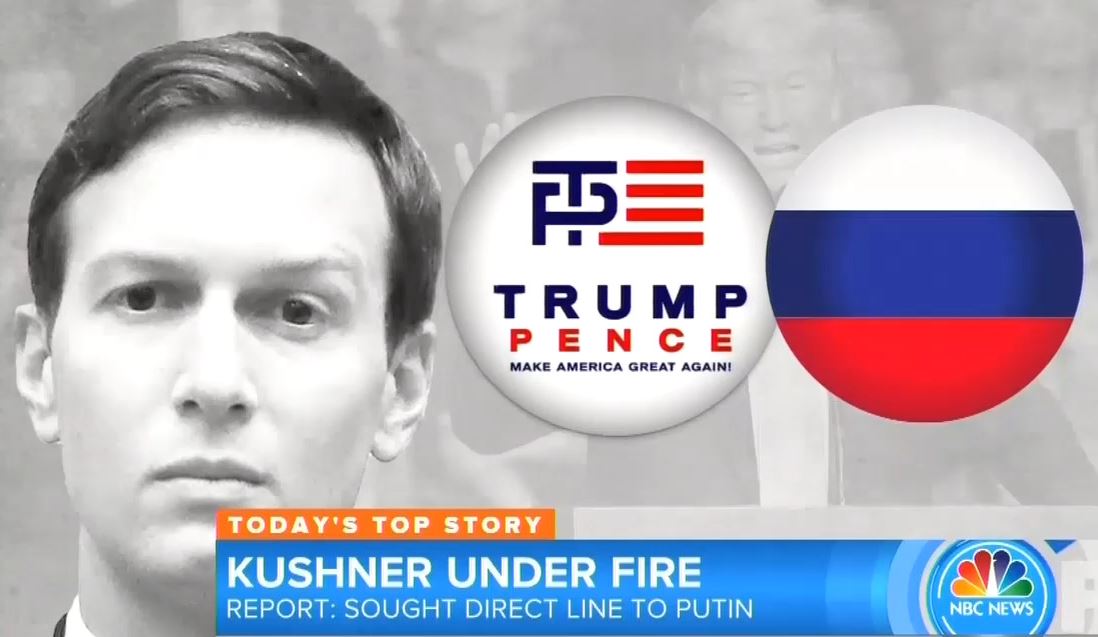 It is remarkable to see the headlines about presidential aides Jared Kushner and Ivanka Trump in the liberal media. The son-in-law and daughter of President Trump are now getting routinely hammered in The Washington Post, The New York Times, on CNN and even in The Wall Street Journal editorial pages, the latter decidedly not in the “liberal media” category.

But what is particularly noticeable is the reluctance to apply the same standards to presidential or other political relatives - if they are liberals.

Here, for example, is the headline in the left-wing Rolling Stone about the man selected by Democrats to give the official televised party response to President Trump’s State of the Union:

Beneath the headline was a heroic photo of the jut-jawed 37-year-old Kennedy, the U.S. Capitol dome behind him. Kennedy is celebrated for working with AIDS-ridden Haitian immigrants and his concern for “Guatemalans and Hondurans and Salvadorans and Mexicans and all sorts of other folks (coming) up through our Southern border.”  He gets not-quite hardball questions like this from the interviewer: “You were (an) outspoken critic of the Republican effort to repeal the Affordable Care Act – and Democrats succeeded at defeating those bills. I'm curious, reflecting on this first year under Trump, what you're proud (of) and how you think Democrats can be more effective?”

As noted here in NewsBusters by P.J. Gladnick, Kennedy had a tad of a drool problem when giving his speech — but Variety’s review of the speech was silent on the subject.

Oh yes, his political pedigree is, but of course, celebrated. So that there is no doubt, his ties are reverently listed in Rolling Stone as the “son of six-term Congressman Joseph P. Kennedy, nephew of Ted Kennedy, grandson of Robert F. Kennedy and grand-nephew of JFK.” And in the aftermath of his speech? Politico enthused that the 37-year old Kennedy “is seen as a potential 2020 contender.” Thirty-seven - the exact same age as, yes, Jared Kushner.

To its credit, The New York Times ran a story on the history of nepotism in the White House. In fact, from President John Adams (who installed son John Quincy as Minister to Prussia and had secured an earlier diplomatic post for young JQA as Minister to the Netherlands when Dad was George Washington’s vice president) all the way through Bill Clinton’s appointment of wife Hillary as his Health Care Czar, appointing relatives has been, if not standard operating procedure for presidents at the very least frequent operating procedure. Hillary, of course massaged her time as First Lady into a New York Senate seat and a presidential nomination - all to the celebration of the liberal media. (And they are still celebrating her!)

Of course, nepotism in the liberal media is either ignored or celebrated outright. As this is written the media is still celebrating the recent release of the movie The Post, a celebration of The Washington Post and its fight for the Pentagon Papers —  the heroine being publisher Katherine Graham. That would be the same Mrs. Graham who, of course, inherited the paper from Dad Eugene Meyer via the suicide of her own husband, Phil Graham. Husband Phil was the Jared Kushner of the paper - the well regarded son-in-law. You will not find any pieces in the paper now belonging to Amazon’s Jeff Bezos on whether Eugene Meyer made a good decision in putting his paper in the hands of Phil Graham, the latter celebrated in the day as a wizard of smart and influential member of the Washington Establishment and an intimate of Democratic leaders.

“In a generational changing of the guard, Arthur Gregg Sulzberger, 37, will become the publisher of The New York Times on Jan. 1. His father, Arthur Ochs Sulzberger Jr., announced on Thursday that he was turning over the post to his son.

The ascension of the younger Mr. Sulzberger, who is known as A. G., comes just over a year after he was named deputy publisher of The Times. The New York Times Company’s board voted in favor of the move during a meeting on Thursday.

…He established himself as a newsroom leader in a different role — a leader of the team behind the so-called innovation report, a document that became a guide for the company’s digital transformation and a template for the rest of the industry. From there, Mr. Sulzberger was named an associate editor. He was also part of the group that outlined the plan to double The Times’s digital revenue by 2020.

…“He’s not a vocal, stand-on-the-desk, beat-his-chest kind of leader — but that’s not the only kind of leadership,” Dean Baquet, the executive editor of The Times, said. “He is very thoughtful. He is very forceful.”

Notice anything? That’s right. The younger Mr. Sulzberger is…..37 years old but “a newsroom leader.” The same magic age of professional celebration as the media is saluting in …Congressman Joe Kennedy III. The 37-year old congressman who, to repeat from Politico, “is seen as a potential 2020 contender” after serving a mere two and a half  terms in the House. Oh yes, the very experienced Mr. Sulzberger, like the very experienced Mr. Kennedy, is the same age as Jared Kushner. But its Mr. Kushner who takes the rap for his age and supposed lack of experience.

Back there in the Bush 43 presidency, George W. Bush, like John Quincy Adams, the son of a president was typically portrayed by the denizens of liberal media like this, which was written by the liberal commentator Jacob Weisburg in his 2004 book on Bush titled The Deluxe Election-Edition Bushisms: The First Term, in His Own Special Words. Wrote Weisburg:

“The question I am most frequently asked about Bushisms is, "Do you really think the president of the United States is dumb?”

The short answer is yes…..

…The most obvious expression of Bush's choice of ignorance is that, at the age of 57, he knows nothing about policy or history.”

One could go on and on here. The sons of Rupert Murdoch are smart….because, well, now that they are in charge the liberal media world believes they will steer the Murdoch media empire in a more moderate direction. Chelsea Clinton is a thoughtful, passionate and smart young woman. Ivanka Trump on the other hand, “does not have any meaningful foreign policy or diplomatic experience” and is unqualified for her job.

And so it goes.

Once upon a time, Joe Kennedy’s grandfather Robert Kennedy was appointed Attorney General of the United States - at the age of 35. He had no legal experience beyond being a Senate investigating committee lawyer and had never practiced law. He is today, safe to say, a Democratic Party and American icon. And yes, the full name of the building where Trump Attorney General Jeff Sessions reports for work everyday is …..the Robert F. Kennedy Department of Justice Building.

And at The New York Times, the reins of the paper have just been handed to the 37-year old son of the publisher because he’s, you know, such a smart guy. Just like Bobby Kennedy’s 37-year old grandson the junior congressman and suddenly a 2020 prospect for the presidency.

Meanwhile? As the stories trashing Jared and Ivanka make the news, The Heritage Foundation is in the headlines as follows here in the Times:

Heritage Foundation Says Trump Has Embraced Two-Thirds of Its Agenda

“WASHINGTON — The Trump administration has pursued policies that have hewed remarkably close to the recommendations of a leading conservative think tank, the Heritage Foundation, which found in a new review that nearly two-thirds of its ideas had been carried out or embraced by the White House over the past year.

Not one to dwell on the details of governing, President Trump has shown a considerable degree of deference to groups within the conservative movement like Heritage, leading to a rightward shift in social, environmental, immigration and foreign policy.

The results, Heritage found in its review, exceeded even the first year of Ronald Reagan’s presidency, whose tenure has long been the conservative gold standard.

…’There is so much noise in this town that I think it obscures the real work that’s being done,’ said Kay Coles James, the new president of the Heritage Foundation…..’This administration is doing quite well in terms of advancing a conservative agenda — clearly, quite well,’ Ms. James added.”

The point? The fact of the matter is that it is no secret that the Washington Establishment - the Swamp - cannot abide Donald Trump. And in the style that is habit to the Swamp and its denizens, the way to get at the Republican President of the moment and halt his agenda is to go after his staff and Cabinet members.  Starting with his family.

In the world of the liberal media, for they who portray every young and not-so-young liberal famous family member from a green congressman to the new publisher of The New York Times as some sort of wise, experienced and sagacious public servant - the reverse is also true. If you are the son of a Republican president and get elected governor of Texas and President of the United States you are dumb as a post. And in the current news of the day, if you are President Trump’s 30-something son-in-law and daughter you are incompetent, arrogant and way out of your depth as senior White House staffers. Particularly if, as is the case here, some two-thirds of the conservative agenda is getting done.

There is nothing new here. Nothing. Trump and Bush relatives and that of any prominent Republican or conservative who might dare to seek or hold public office or a prominent position of some sort are incompetent idiots, dumb as posts and way over their head. Kennedy and Sulzberger relatives and any liberal relative in any position of prominence anywhere are blossoming geniuses.

The only thing new is the particularly vivid display of liberal media hypocrisy. You might even say that the hypocrisy is, well, all “relative.”