Media Spin: From Virginia and New Jersey to the Dossier and Menendez 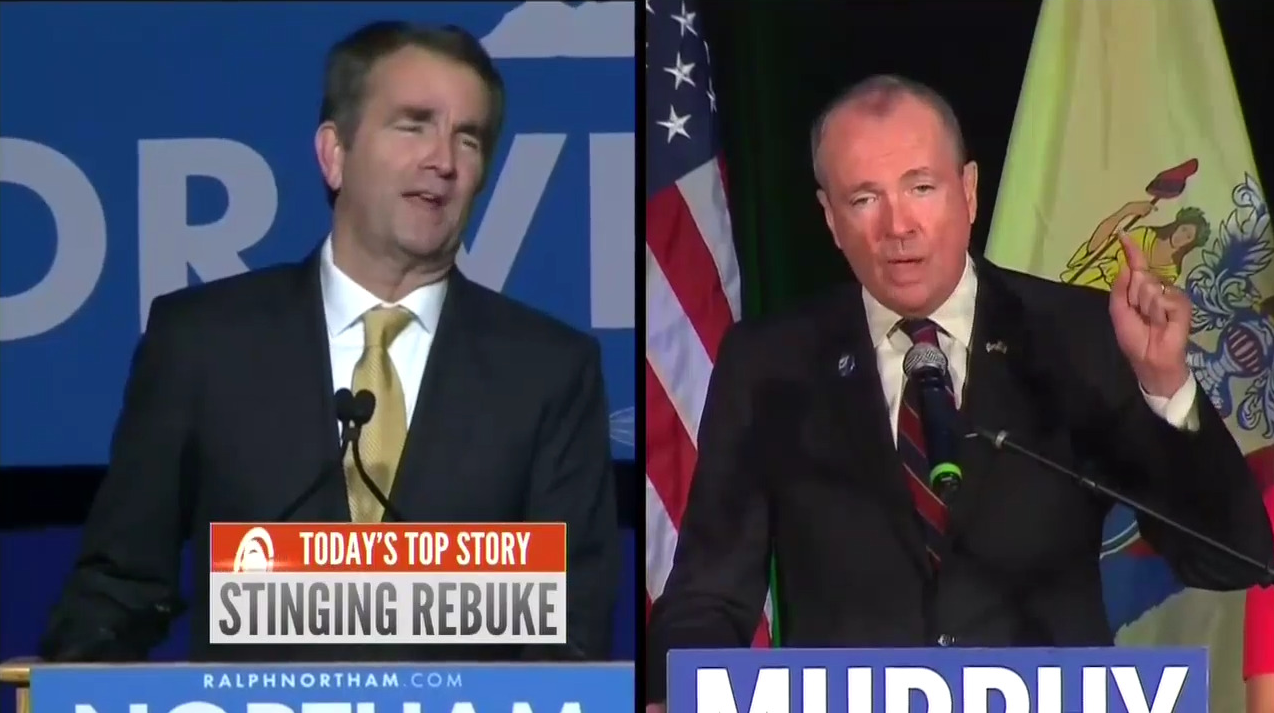 It is always amazing to see how the liberal media play their game of spinning for Democrats.

The latest one? To try and convince people that Democratic wins in the Virginia and New Jersey gubernatorial races were rebukes of President Trump. Yes, there were increases for Democrats in Virginia. Yes, polling, such as that quoted here in The Hill, says Democrats were motivated by anger at Trump.  And yes, Ralph Northam got more votes than any previous candidate for governor. Whether Northam won by five votes or five million, the Democratic nominee for governor of Virginia, a blue state, should be assured of being in the winners column.

Two blue states — where Trump lost —  didn’t vote for his party’s candidates for governor. And they hate Trump.  And of course there is no mention in the media that over the eight years of the Obama administration as reported at Fox in December 2016:

Democrats lost over 1,000 seats under Obama The Democratic Party suffered huge losses at every level during Obama’s West Wing tenure.

The story notes this:

“The grand total: a net loss of 1,042 state and federal Democratic posts, including congressional and state legislative seats, governorships and the presidency.”

What is not included in that total? The Virginia governorship - which elected a Democrat (Terry McAuliffe) in 2013. It does include Republican Bob McDonnell, elected in 2009.  In other words, while Trump is not quite at the end of his first year and we will have to wait and see how this plays out, we already know that Obama’s “anti-Obama” vote had a huge negative impact on the Democratic Party in Obama’s eight years - except in the 2013 race for governor of Virginia. And, of course, Obama’s own two presidential runs.

And a newsflash? Historically off-year elections like what lies ahead in 2018 are almost always bad for the sitting president no matter their party. The exceptions since 1938 are JFK in 1962, Clinton in 1998 and George W. Bush in 2002. Other than that they more often as not are not just bad for a sitting president, if not terrible. And that has been the rule not the exception for the last twelve of thirteen presidents. So if the pattern holds and Trump has a bad 2018 - the main headline should be: Nothing New.

Take a look at some of these wildly misleading stories.  Here from The Washington Post’s Dana Milbank:

Trump was on the ballot in Virginia. He lost.

“President Trump may have been 7,000 miles away in Seoul on Tuesday, but make no mistake: He was on the ballot in Virginia when his imitator, Republican Ed Gillespie, lost the closely watched gubernatorial race to Democrat Ralph Northam.”

Winners and losers from Election Day 2017

It read in part:

Out there in the Los Angeles Times was this:

“Democrat Ralph Northam swept to victory in the race for Virginia governor on Tuesday in a night of political retaliation against President Trump that also saw a Democratic gubernatorial win in New Jersey.”

In the New York Times it was this:

With Virginia, Voters Give Democrats First Big Wins of the Trump Era

“FAIRFAX, Va. — Voters delivered their first forceful rebuke of President Trump and his party on Tuesday night, with Democrats exploiting Mr. Trump’s deep unpopularity to capture the governorships in Virginia and New Jersey and make significant inroads into suburban communities that once favored the Republican Party.”

And there was this priceless editorial from the Times:

“Ralph Northam’s election as Virginia governor amid reportedly high turnout on Tuesday is a stinging and welcome rebuke to President Trump and white nationalism.”

There’s more of this unbelievably disingenuous reporting, columnizing and editorializing but these examples suffice.  Nowhere do they tell readers that seven out of the last ten Virginia governor’s races have gone to Democrats. Or that four of the last six U.S. Senators from Virginia were Democrats. Nowhere do they report that Virginia not only didn’t vote for Trump it didn’t vote for Republican presidential nominees Romney or McCain either. Likewise in New Jersey the anomaly was the presence of a Republican governor - Chris Christie. Nowhere to be found is the fact that of the last eight elected New Jersey governors (they’ve had a few acting governors in between) five were Democrats. Not to mention of the last seven New Jersey presidential elections and elections for US Senators all were won by Democrats.

Why does this kind of contextual information not make these stories in The Washington Post, The New York Times or the Los Angeles Times? For one very simple reason: they don’t back up the narrative these liberal papers wish to tell. That narrative being, of course, that Trump is a bad guy and the country is rebelling against him.

This would be hilarious if in fact the deliberate misrepresentation of the news were not so serious. If ever there is an illustration of just why so many Americans have flocked to Fox News or conservative talk radio or conservative web sites like this one it is the coverage by the liberal media of the results in the Virginia and New Jersey elections.  Not to mention that this past week has seen the one-year anniversary of the 2016 election.

Recall the headlines leading up to that unforgettable election night? Headlines like this one from the Times:

Hillary Clinton has an 85% chance to win.

The Huffington Post wrote up the impending election this way:

"HuffPost Pollster is giving Clinton a 98 percent chance of winning, and The New York Times’ model at The Upshot puts her chances at 85 percent."

And on and on these kind of stories went in the mainstream media —  all through the election year. Hillary wasn’t just going to win she was going to win in a landslide. And then? No wonder her supporters are still wandering around howling at moon.

The hard fact here is that the liberal media is almost incapable of honestly reporting the facts when it comes to anything that has to do with President Trump or for that matter all manner of other things.

Put the elections in Virginia and New Jersey aside and move to the subject of the infamous “Trump dossier” and the machinations of the GPS Fusion group and the Clinton campaign. The Wall Street Journal’s Kimberley Strassel took note of how the game we are discussing here is played in a column this week titled:

Lifting the Steele Curtain
The Fusion GPS dossier was one of the dirtiest political tricks in U.S. history.

Strassel writes in part, this:

“‘Details from the dossier were not reported before Election Day,’” ran a recent CNN story. Hillary Clinton herself stressed the point in a recent “Daily Show” appearance. The dossier, she said, is ‘part of what happens in a campaign where you get information that may or may not be useful and you try to make sure anything you put out in the public arena is accurate. So this thing didn’t come out until after the election, and it’s still being evaluated.’

This is utterly untrue. In British court documents Mr. Steele has acknowledged he briefed U.S. reporters about the dossier in September 2016. Those briefed included journalists from the New York Times , the Washington Post, Yahoo News and others. Mr. Steele, by his own admission (in an interview with Mother Jones), also gave his dossier in July 2016 to the FBI.

Among the dossier’s contents were allegations that in early July 2016 Carter Page, sometimes described as a foreign-policy adviser to Candidate Trump, held a “secret” meeting with two high-ranking Russians connected to President Vladimir Putin. It even claimed these Russians offered to give Mr. Page a 19% share in Russia’s state oil company in return for a future President Trump lifting U.S. sanctions. This dossier allegation is ludicrous on its face. Mr. Page was at most a minor figure in the campaign and has testified under oath that he never met the two men in question or had such a conversation.

Yet the press ran with it. On Sept. 23, 2016, Yahoo News’s Michael Isikoff published a bombshell story under the headline: “U.S. intel officials probe ties between Trump adviser and Kremlin.” Mr. Isikoff said “U.S. officials” had “received intelligence” about Mr. Page and Russians, and then went on to recite verbatim all the unfounded dossier allegations. He attributed all this to a “well-placed Western intelligence source,” making it sound as if this info had come from someone in government rather than from an ex-spy-for-hire.

The Clinton campaign jumped all over it, spinning its own oppo research as a government investigation into Mr. Trump. Jennifer Palmieri, the campaign’s communications director, the next day took to television to tout the Isikoff story and cite “U.S. intelligence officials” in the same breath as Mr. Page. Other Clinton surrogates fanned out on TV and Twitter to spread the allegations.

The Isikoff piece publicly launched the Trump-Russia collusion narrative—only 1½ months from the election—and the whole dossier operation counts as one of the greatest political stitch-ups of all time.”

In other words? In other words what Strassel is spotlighting here is a deliberate - say again deliberate - liberal media misrepresentation of the facts of a seriously important story. Not to mention working hand in glove with their ideological allies in the Clinton campaign.

The good news? The good news in all of this is that the American people are not stupid. They are long since on to this kind of game playing with facts by a liberal media that is intent on reporting stories only in a fashion that benefits their left-wing world view.

And speaking of same? This sudden and massive coverage of Alabama GOP Senate candidate Roy Moore and a 38-year old charge of sex with a 14 year old? Where is all the massive on-going liberal media coverage of Democratic Senator Bob Menendez’s trial for corruption and bribery?

It isn’t there. Funny how that works, yes?  No, actually.

And oh by the way? Where is Senator Menendez from?  That would be….blue New Jersey.