The President and the Media: Time to Re-Do Press Briefings?

Here’s the headline that is causing gasps of astonishment in the White House press corps and the larger liberal media.  (The Justice referred to here is the title of Fox host Judge Jeanine Pirro’s Fox News show.)

This Fox version of the story - there are others - begins this way, citing - what else? - two presidential tweets:

“President Donald Trump doubled down on his threat to end the White House daily press briefing, calling it a ‘good idea.’

In an interview with Jeanine Pirro that will air Saturday at 9pm ET on "Justice," Trump reiterated what he had tweeted this morning.” 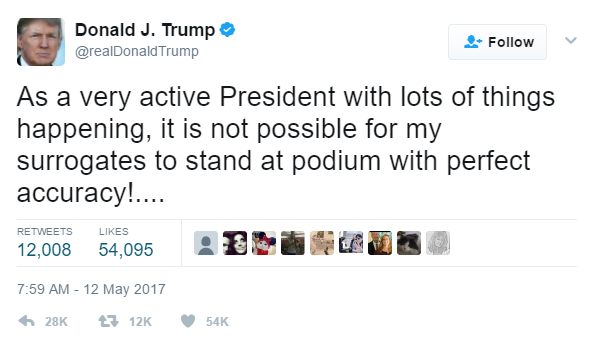 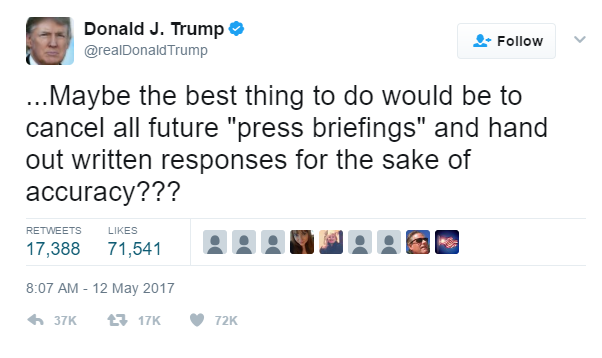 Even staunch supporter and host Jeanine Pirro was astonished, replying, "You don't mean that!”

To which the President calmly replied: "Unless I have them every two weeks and do it myself, we won't have them. I think it's a good idea.” 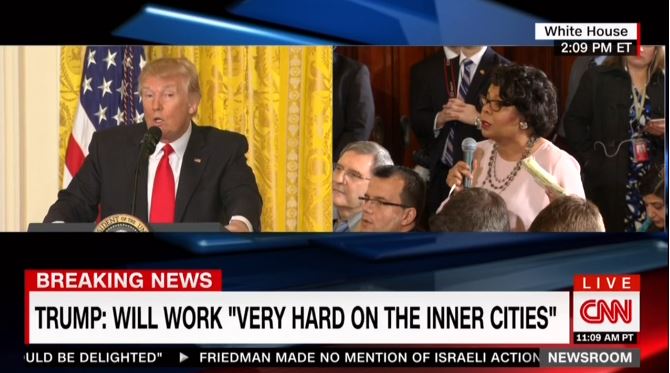 Let’s stop here a moment and take a real look at this.

Clearly the President is exasperated with a press corps that is repeatedly parsing every utterance from both himself and particularly his staff - and then saying they are in conflict. On occasion this has been true. But so too has it been true that the media writ large has, time after time, presented stories about Trump or the Trump White House that have been flatly untrue - and they skate on to no consequence.

Two recent examples? The press was filled with stories that Deputy Attorney General Rod Rosenstein was upset that the White House had fixated on his now-famous memo listing in detail the missteps made by FBI Director James Comey. So upset that he threatened to resign. The Washington Post reported it here, saying:

“Rosenstein threatened to resign after the narrative emerging from the White House on Tuesday evening cast him as a prime mover of the decision to fire Comey and that the president acted only on his recommendation, said the person close to the White House, who spoke on the condition of anonymity because of the sensitivity of the matter.”

In true media style, the Washington Post report was quickly picked up elsewhere, as here at the Huffington Post. The HuffPo headlined it this way:

Rod Rosenstein may have chafed at the White House narrative that he was the driving force behind the firing.

Not so fast. Over here at Sinclair Broadcast Group’s Washington affiliate WJLA, reporter Michelle Macaluso did the apparently unthinkable for the mainstream media. Reporter Macaluso  located Rosenstein in person and asked him directly if he was threatening to quit his job.  The WJLA headline:

Then there was this story - this version of the story headlined by ABC News:

FBI Director James Comey requested additional money and staffing from Deputy Attorney General Rod Rosenstein for the investigation into Russian interference in the presidential election just days before his firing, according to two sources, including Sen. Richard Durbin, D-Ill., and a U.S. official with knowledge of the situation.

News of the request, first reported by The New York Times, came as Trump administration officials claimed that Comey's termination was unrelated to the investigation. Comey briefed some members of the Senate Intelligence Committee on the request on Monday, according to the U.S. official.

But there was a soon-to-be small problem with this story as well. Acting FBI Director Andrew McCabe was called to testify before the U.S. Senate Select Committee on Intelligence and, as Reuters reported here, was asked directly about whether the FBI had enough resources to do its investigation. The Reuters headline:

The Reuters story began by saying:

The FBI's acting head said on Thursday he believed the agency has sufficient resources to investigate alleged Russian interference in the 2016 U.S. election and he was not aware of any request for more resources.

‘If you are referring to the Russia investigation, I do. I believe we have the adequate resources to do it and I know that we have resourced that investigation adequately,’ acting FBI director Andrew McCabe told lawmakers, adding that he was unaware of any request by the agency for additional resources.

There were none, of course. That line of questioning is only reserved for the Trump White House.

The President understands this game to his core. Thus he has said what to the Inside-the-Beltway crew of both parties is unthinkable. Since this game is being played, maybe at long last its time to stop the game altogether and concentrate on exactly what the press corp demands: the truth. Accuracy. And since events - and this President - move fast, maybe - just maybe - it is time to totally revamp the way the White House communicates with the press.

Trump’s suggestion is worth considering. From now on inquiries to the White House from the press corps would be submitted to Spicer’s press staff in writing. This would allow for the staff to verify - with accuracy - the answer, thus ending or greatly reducing the problem of the media complaining that the White House is not telling the truth. Then, every couple of weeks, the President himself can hold a press conference and the White House press corps can get their answers straight from the man himself.

The core problem here is the double-standard. The media, as the examples above attest, print stories that are flatly not true. When this is pointed out - they effectively shrug their shoulders, ignore the problem and move on. Meanwhile the slightest deviation in a story from the White House press office results in thundering headlines about a White House that deliberately lies and misrepresents or is in chaos.

It is without doubt time to take a fresh look at the way the White House and the press communicates. Without doubt President Trump has inspired the wrath of the entire Washington Establishment - on Capital Hill, in the media, in the lobbyist preserves of K Street and in the salons of Georgetown. This animus towards the President colors every move he makes - or doesn’t make. The city is up to its eyeballs in wild, not to mention hysterical conspiratorial tales  - all without a shred of evidence - about Trump and Russians or Trump and this, that or the other thing. This is happening for one reason and one reason only. The denizens of the swamp deeply resent the notion of “draining the swamp”, the latter being shorthand for challenging the power centers of Washington on behalf of average Americans across the country. Their basic response: hysteria.

So now comes the President himself to say what is unthinkable to the media. To say that maybe, just maybe, the way the communications system works in Washington with President and press is in fact not working - and that change, if not yet at hand, should at least be thoughtfully considered.

Well, amen to that. It’s about time.