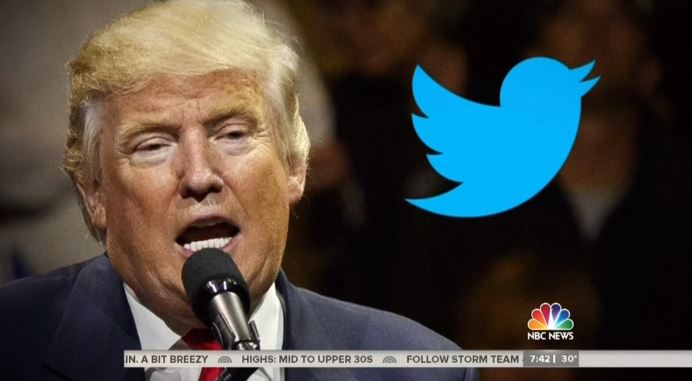 The President of the United States made it all up, says Time magazine.

But then again, he was right - says Time magazine.

In a remarkable cover story notable for its schizophrenia, Time has a cover depicting a casual President Donald Trump tweeting while leaning against a cracked and crumbling Washington Monument. The caption: "Trump’s War on Washington."

On the one hand, Time says this:

At 6:35 a.m. on March 4, President Donald Trump launched an attack against the government of the United States. Deploying his favorite weapon, Twitter, he wrote, "Terrible! Just found out that Obama had my 'wires tapped' in Trump Tower just before the victory. Nothing found. This is McCarthyism!" In fewer than 140 characters, he accused a former President of an impeachable offense, suggested that Justice Department agents might have engaged in a felony and gestured at the possibility that federal judges enabled a political outrage.

He wasn't finished. Over the next half hour--as Trump's staff, left behind in Washington, began waking up and unlocking their phones to discover what the boss was up to down at Mar-a-Lago--the President added two more tweets suggesting that Obama and federal investigators had broken the law and should be prosecuted. He capped his indictment with a fourth blurt, comparing the allegation with the worst political crisis of his 70-year lifetime. ‘How low has President Obama gone to tapp [sic] my phones during the very sacred election process. This is Nixon/Watergate. Bad (or sick) guy!’

In other words? Time is saying that that crazy Trump falsely accused ex-President Obama of using the government to surveil a political opponent - that being Donald Trump. Time was palpably outraged at such nonsense. Until, of course, in the same story - make that the very next paragraph - the magazine said this:

In other words?  Time asserts that the government of the United States was eavesdropping in some fashion on candidate Donald Trump. The magazine knows this because of:

Revelations of contacts between Trump aides and Russian officials have forced the resignation of the President's National Security Adviser, Michael Flynn, and the recusal of his Attorney General, Jeff Sessions….

“Revelations of contacts”?  Just how does Time know this? Because, of course, the government of the United States was in fact conducting surveillance. And someone or someones, plural, leaked the fact of that surveillance to the media. Repeatedly.

“Neither he nor his White House staff provided any evidence for his extraordinary accusations against what some of them call a ‘deep state.’”

Got that? Let’s follow this liberal media schizophrenia. Trump is nuts to say that he was wiretapped - surveilled - by the Obama administration. But there are “Revelations of contacts between Trump aides and Russian officials…” that clearly could not be obtained without surveillance of some type - by the Obama administration. Which, of course, never did any such thing. Except that it did, which is how Time and the rest of the mainstream media knows about these “revelations of contacts” in the first place.

Confusing, no? Actually, no. Not if one reads the reporting of John Solomon (a 20 year AP reporter and former editor of The Washington Times) and Sara Carter over here at Circa. The headline: "The FBI investigated a Trump server in its Russia probe, but no charges are expected."

Solomon and Carter report this:

Intelligence sources say that the FBI investigated a computer tied to Donald Trump's business but there's no evidence to date that would warrant criminal charges against any of the president’s associates.

The months-long FBI counterintelligence investigation into Russian efforts to influence the 2016 presidential campaign briefly investigated a computer server tied to Donald Trump's businesses near the end of the election but has not gathered evidence of election tampering to date that would warrant criminal charges against any of the president’s associates, Circa has learned.

….For instance, the FBI and Justice Department received a Foreign Intelligence Surveillance Act warrant in October to help further the Russia investigation. Officials stressed there were no intercepts of Trump’s phone or emails.

Separately, they used traditional investigative techniques to review a computer server tied to the the soon-to-be-president's businesses in Trump Towers in New York but located elsewhere.

…Intelligence normally reserved for just a handful of intelligence leaders was spread through briefings  to scores of workers, and soon leaks began appearing in news media, often in stories lacking the context of how national security investigations are actually conducted. The leak of the Flynn conversations with the Russian ambassador alarmed career FBI officials, who knew it had been gathered using the most sensitive of surveillance powers.

In other words? Solomon and Carter confirmed that yes, in fact, a server used by Trump Tower was surveilled. There was in fact an Obama Justice Department request for a FISA warrant.  And in fact a conversation between General Michael Flynn with the Russian Ambassador was discovered by “…using the most sensitive of surveillance powers.”

And let’s not forget that January 20, 2017 headline right there on the front page of the New York Times. It shrieked: “Wiretapped Data Used in Inquiry of Trump Aides.”

The story said in part:

Hilariously, in this schizophrenic Time piece, apparently feeling the need to defend the Obama administration’s leaks of classified information obtained by the surveillance  of a political opponent in the run-up to an election -the magazine even found a villain: Mark Levin. Yes, you read that right. Here’s the way the magazine played it:

After storming out of Washington for another weekend in Palm Beach, Trump read an incendiary mash-up of all the earlier coverage related to a possible FISA warrant assembled by Breitbart News, according to aides. The conclusion of that report: "the Obama Administration sought, and eventually obtained, authorization to eavesdrop on the Trump campaign." The article quoted right-wing radio host Mark Levin calling the investigation a ‘silent coup.’

Left out of the story was Levin’s detailed recounting on Fox News of mainstream media stories that clearly depended on leaks from Obama administration sources.

But wait! There’s more here than Time’s “no-there-wasn’t-yes-there-was” schizophrenia over the government surveillance of an Obama opponent. What really upsets the liberal magazine is the horrifying reality - to liberals - that President Trump is serious about “draining the swamp” that is Washington, DC. Writes Time:

It would be one thing if Trump's outburst against those investigating the Russia operation was simply an emotional backlash in the face of political woes. But the pattern of Trump's seven-week presidency so far has been to reach for his political base whenever he faces opposition. As a self-declared warrior against the state and drainer of Washington's swamp, he has opposition on multiple fronts.

Trump has taken a number of steps aimed at cutting the government. He has ordered that for every new government rule, two existing ones must be eliminated. He has set in motion an unwinding of Wall Street regulations imposed after the 2008 financial crisis. His Labor Department is under orders to review, and presumably rescind, Obama's regulation of financial advisers who deal with Main Street investors.

His proposed budget, which faces an uncertain fate in Congress, contains aggressive cuts totaling $54 billion at nondefense agencies. Cuts proposed at the EPA could shrink Clean Air Act implementation funds granted to states by $68 million, to less than $160 million. Even greater cuts, percentage-wise, would limit funds for fighting water and lead pollution. Trump's denunciation of a "slow and burdensome" FDA has many in the medical community, not to mention staffers in that agency, fearful that his future pick to lead them could pare back drug- and food-safety measures in place since the early 1960s.

Notice those two sentences that say (bold print supplied):“But the pattern of Trump's seven-week presidency so far has been to reach for his political base whenever he faces opposition. As a self-declared warrior against the state and drainer of Washington's swamp, he has opposition on multiple fronts.”

Unmentioned is that Time clearly counts itself as a key ally in that Trump opposition, opposition that uses media outlets like Time as its own base.

One of the first to pick up on just that role Time was playing with this latest broadside was former Arkansas Governor and GOP presidential candidate Mike Huckabee. Appearing on Fox, the governor nailed the problem exactly, saying this as reported by Fox:

He said that journalists like the one that wrote the article still do not understand that Americans voted for Trump because of the size of government bureaucracy, not in spite of it.

"This is at the zenith of what people are disgusted by," Huckabee said, adding that Trump is the "major disruption" the people have been wanting to see in the capital.

"It's a war for the freedom that the American people have lost because of Washington," he said.

But safe to say, so thoroughly invested is the magazine in this enterprise that it has no recognition of just how schizophrenic this latest jewel of anti-Trump propaganda actually reads.

Amazing, yes? No, not really.